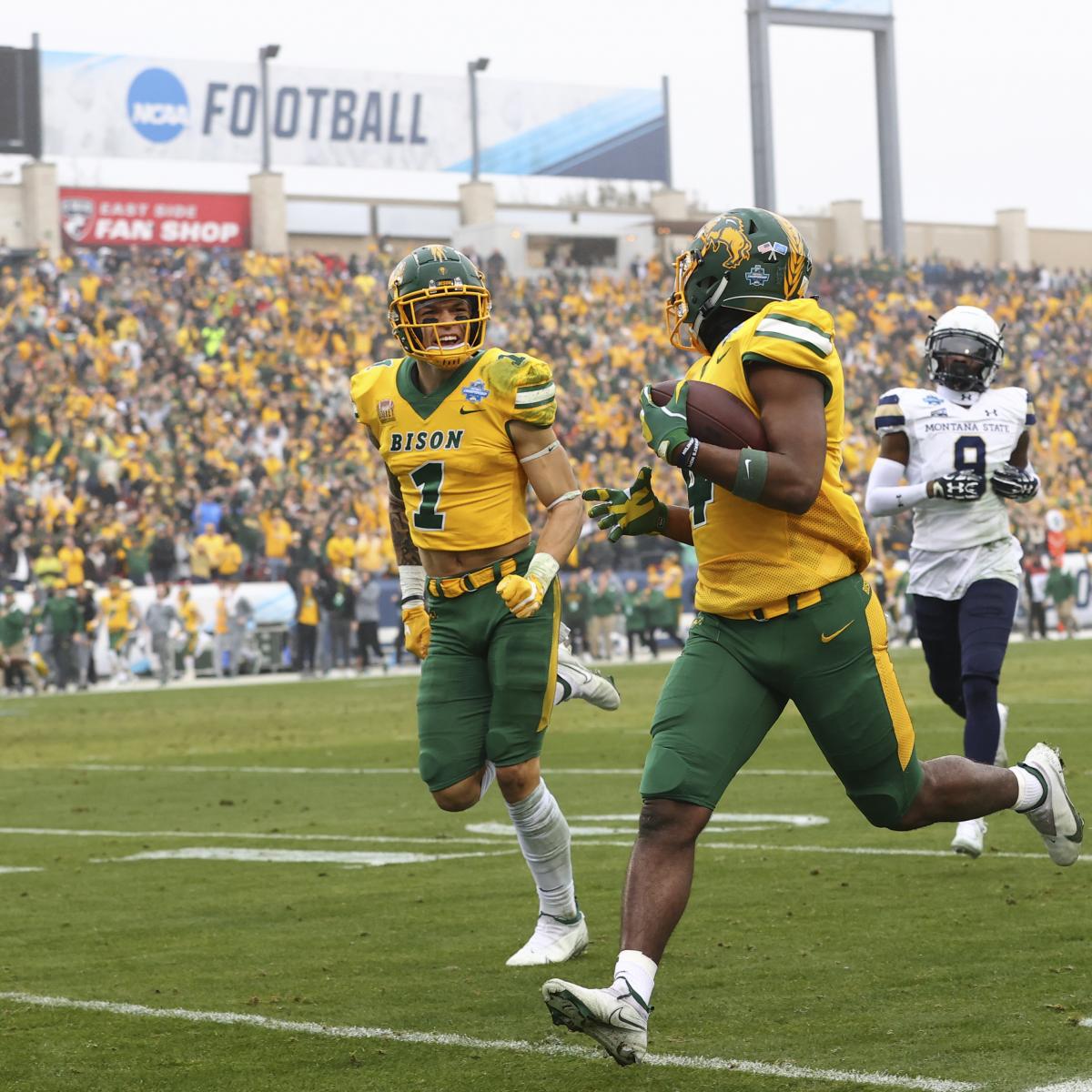 2022 NFL Draft: 6 Players Who Could Fly Up Boards This Offseason

After COVID-19 interrupted the buildup to the NFL draft in 2020 and 2021—including the Senior Bowl, East-West Shrine Bowl, the NFL combine and in-person pro days—prospects should have more opportunities to show teams what they can do this year.

But it’s the prospects who aren’t at the top of teams’ big boards that have the most to gain from these predraft activities. If they can perform and test at their highest level, it could mean being selected dozens of spots higher than their current projections, or even moving from Day 3 to Day 2 or Day 2 to Day 1.

By definition, for players to be flying up draft boards, they wouldn’t be projected first-round picks at this time, since those players are already likely atop every team’s big board. Thus, we’re taking a look at players who are currently projected to come off the board in Rounds 2-7 but who could move up after a strong performance at the East-West Shrine Bowl on February 3, Senior Bowl on February 5, the NFL combine in early March and/or pro days in March and April.

Prospect rankings via B/R’s Big Board.

On December 22, Coastal Carolina tight end Isaiah Likely (scouting report) announced that he would declare for the NFL draft following a season that saw him total 912 receiving yards and 12 touchdowns, more than double his scoring total in any previous season.

Likely was named a semifinalist for the John Mackey Award, presented to the nation’s most outstanding tight end. (Trey McBride ultimately won). He became the fifth Chanticleer in program history to top 2,000 career receiving yards.

His efforts earned him second-team All-American honors from multiple outlets, as well as a first-team All-Sun Belt selection and invitations to the all-important Senior Bowl and the East-West Shrine Bowl.

It is in those two showcases that Likely, already a buzzy prospect thanks in no small part to Coastal Carolina’s recent success (rising as high as No. 9 on the AP Top 25 in 2020), can boost his draft stock to somewhere in the Day 2 range. Currently ranked 10th among tight end prospects and 116th overall on B/R’s Big Board, Likely’s athleticism and versatility could impress this spring.

“Isaiah Likely is a good athlete who plays with toughness at tight end,” B/R NFL Scout Nate Tice, who pegs Likely as a Round 4 prospect, writes in his scouting report. “He was asked to align all over the formation in college, including from in-line as a Y TE. He has twitchiness and agility that can make defenders miss and allows him to create yards after the catch.”

This year isn’t considered a gold rush at the position, with Colorado State’s Trey McBride and Texas A&M’s Jalen Wydermyer considered the elite difference-makers. But Wisconsin’s Jake Ferguson seems to be on everyone’s list of prospects who could fight their way into Day 2 consideration this spring, and for good reason.

The 6’5″, 250-pound prospect was top two in receiving for the Badgers in four different seasons, finishing his career with 1,618 receiving yards and 13 touchdowns. In his senior year, he hauled in 46 passes for 460 yards and three touchdowns.

Part of the reason Ferguson isn’t more highly ranked is that he doesn’t fit the profile of the current mismatch tight end who can flex into multiple positions on the field. But teams will always need a solid in-line tight end on the roster and, according to the Draft Network’s Kyle Crabbs, Ferguson “is a rock-solid tight end prospect who has a number of practical applications to both 11 and 12 personnel groupings.”

The Draft Network also listed Ferguson as a player with the potential to move into the top 100 picks.

Ferguson earned a 6.7 grade from B/R’s NFL Scouting Department, which puts him in the fourth-round range.

The Badgers product will have multiple opportunities this spring to show teams that he is the full package, boasting receiving talent as well as solid blocking skills. For teams that want to play him in-line, his strength tests at the combine could prove particularly important.

Christian Watson isn’t currently included among B/R’s top 150 prospect rankings, which means B/R scouts don’t see him coming off the board within the first four rounds.

There are 18 wideouts included on that Big Board. There were 36 taken in the 2021 NFL draft and 35 the year before that. If Watson lives up to his potential during the spring predraft activities, he has a shot of being selected late on Day 2.

Of top importance for Watson will be the Senior Bowl in Mobile, Alabama, a chance for him to build on the hype he generated in the FCS Championship Game against Montana State, where he had four receptions for 61 yards after returning from a three-game absence with a hamstring injury.

The Athletic’s Dane Brugler called the 6’5″, 208-pound North Dakota State product “a three-level threat [with] ball skills” and noted his 4.44 speed (an official number from a high school 40-yard dash). If he runs the same at the NFL combine, that would put him in the neighborhood of what Nico Collins (Houston Texans, Round 3), tight end Kyle Pitts (Atlanta Falcons, Round 1), Dez Fitzpatrick (Tennessee Titans, Round 4) and Terrace Marshall Jr. (Carolina Panthers, Round 2) ran last year. (Note that the 2021 combine was canceled due to COVID-19, so these numbers are from college pro days.)

Given that Watson measured his 4.44 40 in high school, however, there’s a strong chance he’s able to run faster than that at this year’s combine and pro day.

A Bison pass-catcher has not been selected in the NFL draft since 1985. But Watson is the best receiver the program has seen in some time, earning second-team All-Missouri Valley Conference honors in 2019 after leading the team with 732 receiving yards and six touchdowns. In his redshirt junior season, he was named first-team All-Missouri Valley at receiver as well as an All-American kick returner.

Indeed, it’s that versatility—Watson has been used on the boundary, in the slot and in the backfield, not to mention his kick-return prowess—that could perk up NFL teams to select him as early as Day 2, rather than Day 3.

Like Christian Watson, Florida running back Dameon Pierce also finds himself sitting outside the top 150 on B/R’s Big Board.

However, while for wide receivers and tight ends underutilization can be a ding on the scouting report, for running backs, it can mean fresh legs and a short injury history. Pierce had just 374 touches in four seasons with the Gators, but if he can turn heads during the Senior Bowl, that, combined with his ability and potential, could turn into a major positive.

In the modern NFL, the running back position just simply isn’t as valued in Rounds 1 or 2, outside a few special candidates. But Pierce could boost his stock from late on Day 3 to the middle rounds with a strong showing in the showcases leading up to the draft.

“Pierce may not have elite athletic upside, but he’s one of the more well-rounded backs in the 2022 NFL draft,” writes Pro Football Network’s Ian Cummings. “He can provide value on every down, both as a runner and a receiver. And that’s something that not all backs can boast.”

Teams will be especially interested in the versatility with which they could deploy Pierce. As Cummings noted, “He’s an excellent receiver for the position, with a much larger route tree than expected for an RB.”

Illini junior safety Kerby Joseph is another prospect who didn’t make it on to B/R’s Big Board, but he’s not going to be under the radar for long.

Though he wasn’t utilized much early in his college career, seeing only two starts in his first three seasons, the defensive back really showed what he can do in the 2021 season.

Though Joseph was a redshirt junior with one year of eligibility remaining thanks to the extra year granted by the NCAA for COVID-19, Joseph declared for the NFL draft on December 12, earned himself a spot on the Senior Bowl roster this season with his play that included 41 solo tackles (including one for loss), a sack and five picks, all the while showing off his ball skills and range. Per Rivals.com, he tied for third in the nation in fumble recoveries (three) during the regular season.

All that production did was earn Joseph All-Big Ten first-team honors from the media and second-team from the coaches.

If Joseph can ride the momentum he built this season into the Senior Bowl, he can make a case for being drafted. “His secure tackling in the back end during the game will convince scouts he can be a reliable single-high defender at the next level,” wrote NFL draft analyst Chad Reuter.

It’s often the players who missed time in their college careers who have the highest potential to fly up draft boards in the events leading up to the NFL draft.

Of course it’s true that, depending on the nature of the injury, getting hurt can cause players’ draft stocks to tumble.

For Virginia Tech cornerback Jermaine Waller (scouting report), the fact that he saw only two games’ worth of action in the 2020 season and then opted out of the 2021 Pinstripe Bowl means that teams are potentially sleeping on his potential. That should change after he shows them what he can do at the East-West Shrine Bowl, the combine and his pro day.

Ahead of the 2020 season, Waller was rehabbing a foot injury and was limited in fall camp. Then, in his first game back, he suffered an upper-back injury. He played in just two games.

This past season, Waller was able to build on the All-ACC honorable mention season he put together in 2019. He tied his 2019 mark of 46 total tackles (31 solo), including two for loss, and registered a career-high four interceptions (with one returned for a touchdown).

Heading into the predraft activities, Waller is ranked No. 142 on B/R’s Big Board. He’s considered a high-level developmental prospect, with a likely Round 5 designation. However, with a standout performance this offseason, Waller could push his draft stock up higher on Day 3.

“Waller was able to bounce back from his injury-riddled 2020 season and showed the skills that made him flash back in 2019,” wrote B/R NFL scout Cory Giddings. “He will need to run fast in the 40 to improve his draft stock, though.”

In addition to posting a swift 40 time, Waller can also impress teams in the Shrine Bowl with improved technique in press coverage. Giddings identified some of Waller’s weaknesses as getting “bumped off at the top of routes” and allowing the receiver to get better position. The Shrine Bowl is a perfect opportunity to address those flaws in his tape and leave teams with a great impression.

Denial of responsibility! NewsUpdate is an automatic aggregator around the global media. All the content are available free on Internet. We have just arranged it in one platform for educational purpose only. In each content, the hyperlink to the primary source is specified. All trademarks belong to their rightful owners, all materials to their authors. If you are the owner of the content and do not want us to publish your materials on our website, please contact us by email – [email protected]. The content will be deleted within 24 hours.
best sports newsboardsDraftFlynews update sportsnewsupdateNFLOffseason

OnePlus Buds Z2 with ANC goes on sale in India: Price, features and how you can get the earbuds for Rs 3,499 – Times of India