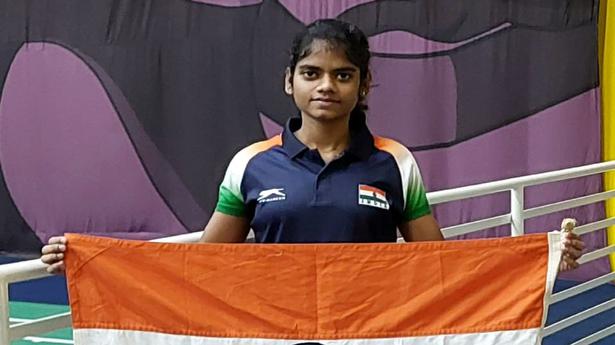 The badminton player has won several medals for the country at national and international level events.

The badminton player has won several medals for the country at national and international level events.

The badminton player has won several medals for the country at national and international level events. She is participating in her second Deaflympics. Earlier, she participated in the 2017 Deaflympics held at Samsun in Turkey. She was the youngest player at the event.

Jerlin Anika started playing badminton at the age of eight. Recollecting her first day on the court, her coach T. Saravanan said that it was Jerlin Anika’s father J. Jeya Ratchagan who brought her to the coaching camp in Madurai as she was interested in Badminton.

Since then there was no looking back for Jerlin Anika. Her performance improved in every match. Despite being the youngest player at the 2017 Deaflympics she managed to reach the Quarterfinals and was given a certificate, he said. She has trained even harder and won gold medals at the 24th Summer Deaflympics, said an elated Saravanan.

Denial of responsibility! NewsUpdate is an automatic aggregator around the global media. All the content are available free on Internet. We have just arranged it in one platform for educational purpose only. In each content, the hyperlink to the primary source is specified. All trademarks belong to their rightful owners, all materials to their authors. If you are the owner of the content and do not want us to publish your materials on our website, please contact us by email – [email protected]. The content will be deleted within 24 hours.
24th24th Summer DeaflympicsAnikabest sports newsDeaflympicsgoldsJerlinJerlin Anika