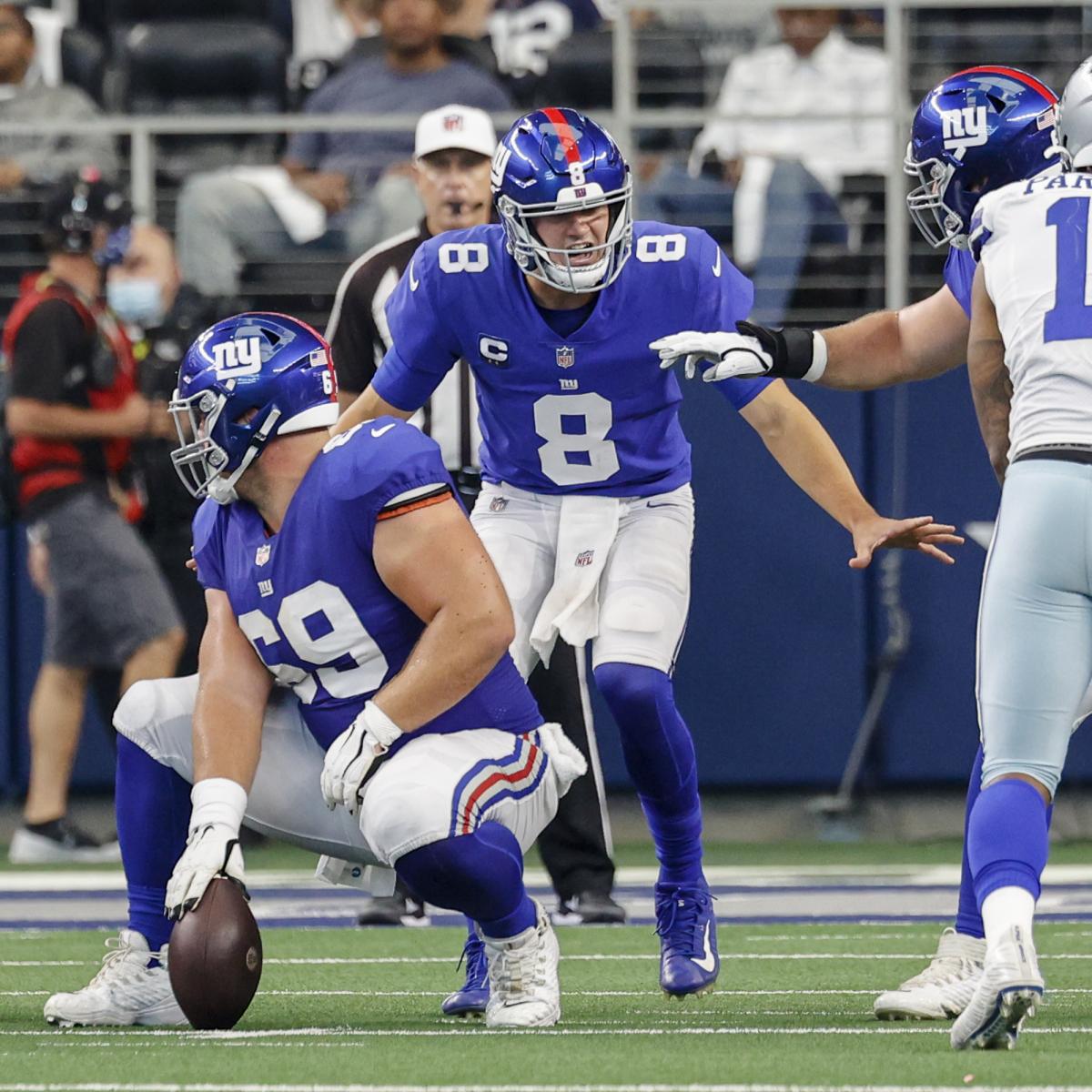 The New York Giants experienced one of the most nightmarish starts of the 2021 NFL season.

After five weeks, the Giants are 1-4 and have one of the longest injury lists in the league.

New York will take a makeshift offense into Week 6’s matchup with the Los Angeles Rams, which has the potential to have one of the most lopsided scores of the weekend.

Although the Giants play three of their next four games at home, they are against the Rams, Carolina and Las Vegas. There is also a road trip to Kansas City mixed in for Week 8.

At this point, the Giants have to be considered one of the potential sellers at the trade deadline. And with every loss, head coach Joe Judge faces a hotter seat for job security.

New York could be without its starting quarterback, No. 1 running back and top three wide receivers for Week 6.

Daniel Jones is in concussion protocol after suffering a blow to the head in Dallas. Saquon Barkley is already confirmed out for Sunday as he recovers from an ankle sprain. Kenny Golladay is expected to be miss at least one week with a hyperextended knee, per NFL Network’s Ian Rapoport.

Sterling Shepard and Darius Slayton both missed Week 5’s loss with injuries. First-round pick Kadarius Toney, who was ejected for throwing a punch, is the best available target for Week 6.

Toney may not see much of the ball if he is the No. 1 available wideout on Sunday since the Giants will be going up against Jalen Ramsey and the Rams secondary.

The Giants will not be expected to win many games while most of their top offensive weapons are sidelined.

They could have managed through one or two injuries, but there is a real possibility Mike Glennon and Devontae Booker form the starting backfield with Toney and Engram as the top two targets.

That is not sustainable in the NFL, and it certainly is not a good enough lineup to beat one of the potential Super Bowl contenders in the NFC.

If the Giants are without their key players for more weeks, they could sink further into the discussion for the No. 1 overall pick in the 2022 NFL draft.

By the time the Giants hit their Week 10 bye, they could be in the conversation for the No. 1 overall pick alongside the Jacksonville Jaguars and Detroit Lions.

Three home games in the next four contests mean next to nothing right now with the players the Giants are expected to trot out on the gridiron.

The Rams are significantly better than the Giants, and they have the potential to put up another 40-point performance against the New York defense. Dallas produced 44 points in Week 5.

After that, the Panthers—with a healing Christian McCaffrey—come to Giants Stadium in Week 7. That could be the perfect get-right game for one of the top running backs in the NFL.

McCaffrey did not play in the Week 5 clash with the Philadelphia Eagles, and he could face a tough potential return in Week 6 versus the Minnesota Vikings.

Joe Judge’s team could be the perfect get-right opponent for Kansas City in Week 8. The Chiefs have a pair of tough road games versus Tennessee and Washington in Weeks 6 and 7.

If Kansas City does not fix its defensive woes in the next two games, it could use the home meeting with the Giants to refocus on its Super Bowl quest.

The Las Vegas Raiders should see their Week 9 trip to New Jersey as an opportunity to pick up a road win in a tight AFC wild-card race.

New York’s schedule after the bye is not promising, either, as it has three road games in four starting with a trip to Tampa in Week 11.

The next realistic spot for a victory could be Week 12 against Philadelphia, or in Week 13 against Miami.

It is hard to be out of a divisional race after Week 5, but the Giants have achieved that feat.

After Sunday’s loss, the Giants are three games adrift of the Cowboys, and they have a head-to-head loss on their record.

Additionally, the Giants have a loss to the Washington Football Team that puts them at 0-2 in the NFC East. Divisional record is the primary tiebreaker if there is a tie.

If there is any good news for the Giants, it is that they do not have to face an NFC East foe until the Week 12 clash with the Eagles.

But that probably does not matter right now since the Giants should play themselves out of the divisional title race by the Week 10 bye.

If the Giants continue to lose, they should look to ship Engram and a few other veteran players elsewhere in order to pick up draft capitol and open up space for younger players to impress Judge and the coaching staff.

Denial of responsibility! NewsUpdate is an automatic aggregator around the global media. All the content are available free on Internet. We have just arranged it in one platform for educational purpose only. In each content, the hyperlink to the primary source is specified. All trademarks belong to their rightful owners, all materials to their authors. If you are the owner of the content and do not want us to publish your materials on our website, please contact us by email – [email protected]. The content will be deleted within 24 hours.
best sports newsdeadlineGiantsnews update sportsnewsupdateNFLreasonsSellers

US talks global cybersecurity without a key player: Russia