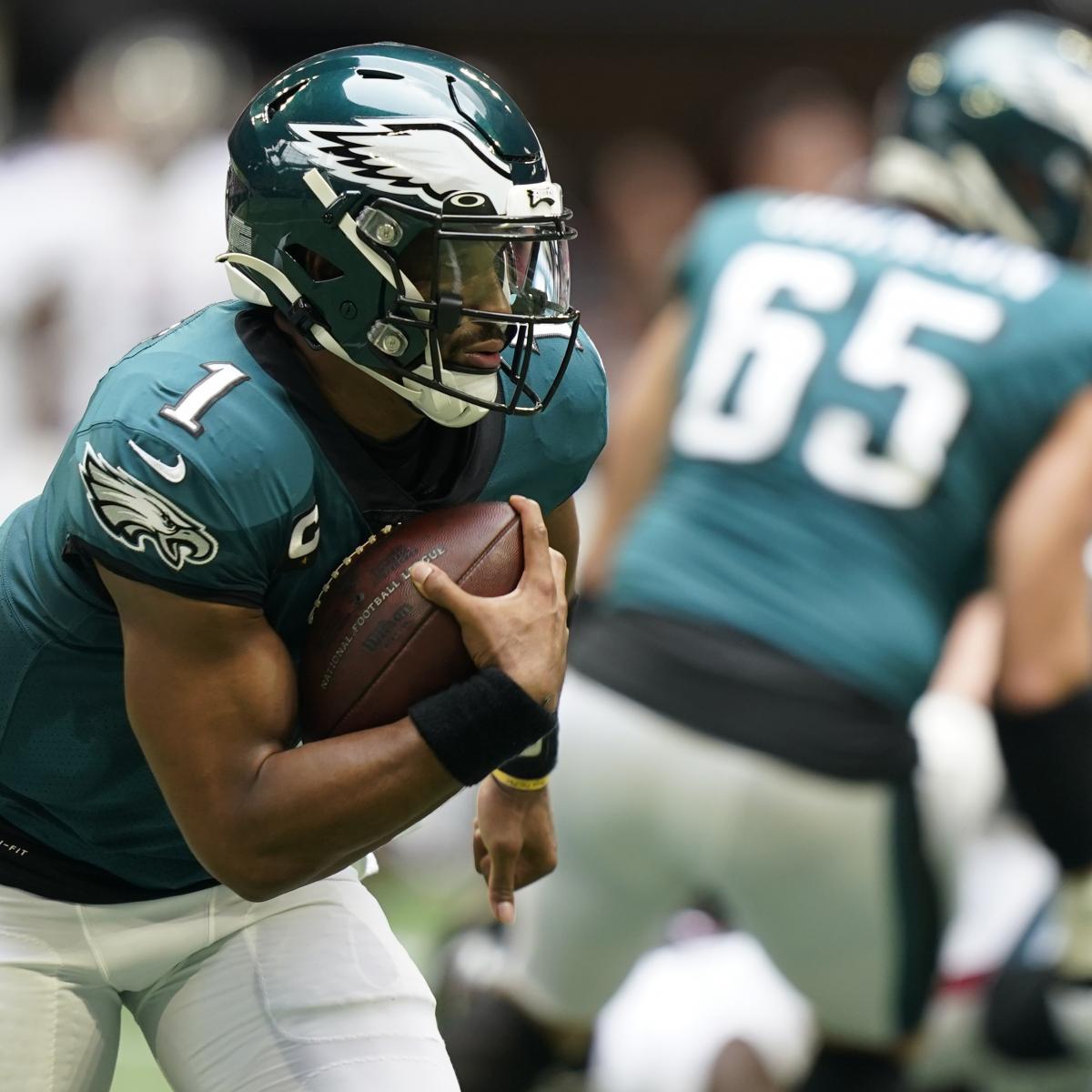 After finishing in last place in the NFC East in 2020, the Philadelphia Eagles are in first after Week 1 of the 2021 NFL season.

The Eagles were the only team in their division to win their season-opener, as they rolled to a 32-6 win over the Atlanta Falcons at Mercedes-Benz Stadium. It was a strong debut for Nick Sirianni, who is getting his first opportunity as an NFL head coach with Philadelphia.

Late in the first half, the Eagles led by only one point. However, quarterback Jalen Hurts connected with tight end Dallas Goedert for a 9-yard touchdown pass with two seconds remaining in the second quarter to kick off a run of 25 unanswered points.

Here are three takeaways from the Eagles’ season-opening victory in Atlanta.

There were rumors during the offseason that the Eagles might trade for a quarterback—and then they did when they acquired Gardner Minshew II in a deal with the Jacksonville Jaguars in late August. But Hurts was always going to be the Week 1 starter, and he showed exactly why in the first game of his sophomore season.

Hurts went 27-of-35 for 264 yards and three touchdowns and rushed for 62 yards on seven carries, leading a high-powered offense that had 434 yards and committed no turnovers. If that’s a sign of things to come for Philly on that side of the ball, it could be a big year for the team.

“Jalen was in complete control the whole game,” Sirianni said, per Paul Newberry of the Associated Press. “I’m very happy with the way he played.”

As a rookie, Hurts had some highs and lows in the brief opportunity he got to be the starter over the final month of the 2020 season. But it was clear that he had the talent and playmaking ability to develop into a strong dual-threat quarterback.

Week 1 may have been a sign of things to come for the 23-year-old this season.

DeVonta Smith isn’t getting a transition period at the start of his NFL career. He entered the regular season as the Eagles’ No. 1 wide receiver after they traded up to take him with the No. 10 overall pick in the 2021 NFL draft. As it turns out, Philadelphia made a smart decision to immediately put the 2020 Heisman Trophy winner into its starting lineup.

In his first NFL game, Smith had six receptions for a game-high 71 yards and a touchdown. The first catch of his career came on an 18-yard scoring pass from Hurts that gave the Eagles a 7-3 lead with six minutes and 17 seconds to go in the first quarter.

According to ESPN Stats & Info, Smith is the third Eagles wide receiver since the NFL merger in 1970 to catch a touchdown in his NFL debut, joining Cris Carter (1987) and Marvin Hargrove (1990).

“It really ain’t hit me yet, honestly,” Smith said, per Dave Zangaro of NBC Sports Philadelphia. “Because I was just in the moment, knowing I had a task [to complete]. It hasn’t hit me yet.”

There will likely be many more touchdowns to come during Smith’s career—and probably quite a few this year. It’s clear that he’s already the most talented receiver on Philadelphia’s offense and will likely be a big contributor throughout 2021.

The Eagles defense had a dominant showing against a solid Falcons offense Sunday. Philadelphia held Atlanta to 260 total yards and kept it out of the end zone, with the Falcons’ points coming on a pair of first-half field goals by Younghoe Koo.

While the Eagles improved their secondary and have a solid linebacker corps, the strength of their defense is the line up front. Their talented edge-rushers and defensive linemen were expected to power the unit and did exactly that in the opener.

Javon Hargrave had two sacks, Hassan Ridgeway also had a sack and Philadelphia consistently put pressure on Atlanta quarterback Matt Ryan, who got hit nine times. It’s hard to get into an offensive rhythm when there’s constantly defenders in your face, which is why the Eagles had so much success in stopping the Falcons.

This is likely to be one of Philadelphia’s top defensive strengths throughout the season. If it can get some improvements in other areas from 2020—and Week 1 was a promising sign—it will likely have much better results. Sunday’s performance provided plenty reason for optimism for this group.

Denial of responsibility! NewsUpdate is an automatic aggregator around the global media. All the content are available free on Internet. We have just arranged it in one platform for educational purpose only. In each content, the hyperlink to the primary source is specified. All trademarks belong to their rightful owners, all materials to their authors. If you are the owner of the content and do not want us to publish your materials on our website, please contact us by email – [email protected]. The content will be deleted within 24 hours.
Loading...
best sports newsEaglesnews update sportsnewsupdatesports newssports updateTakeawaysWeek

Realme C25Y to Launch in India on September 16