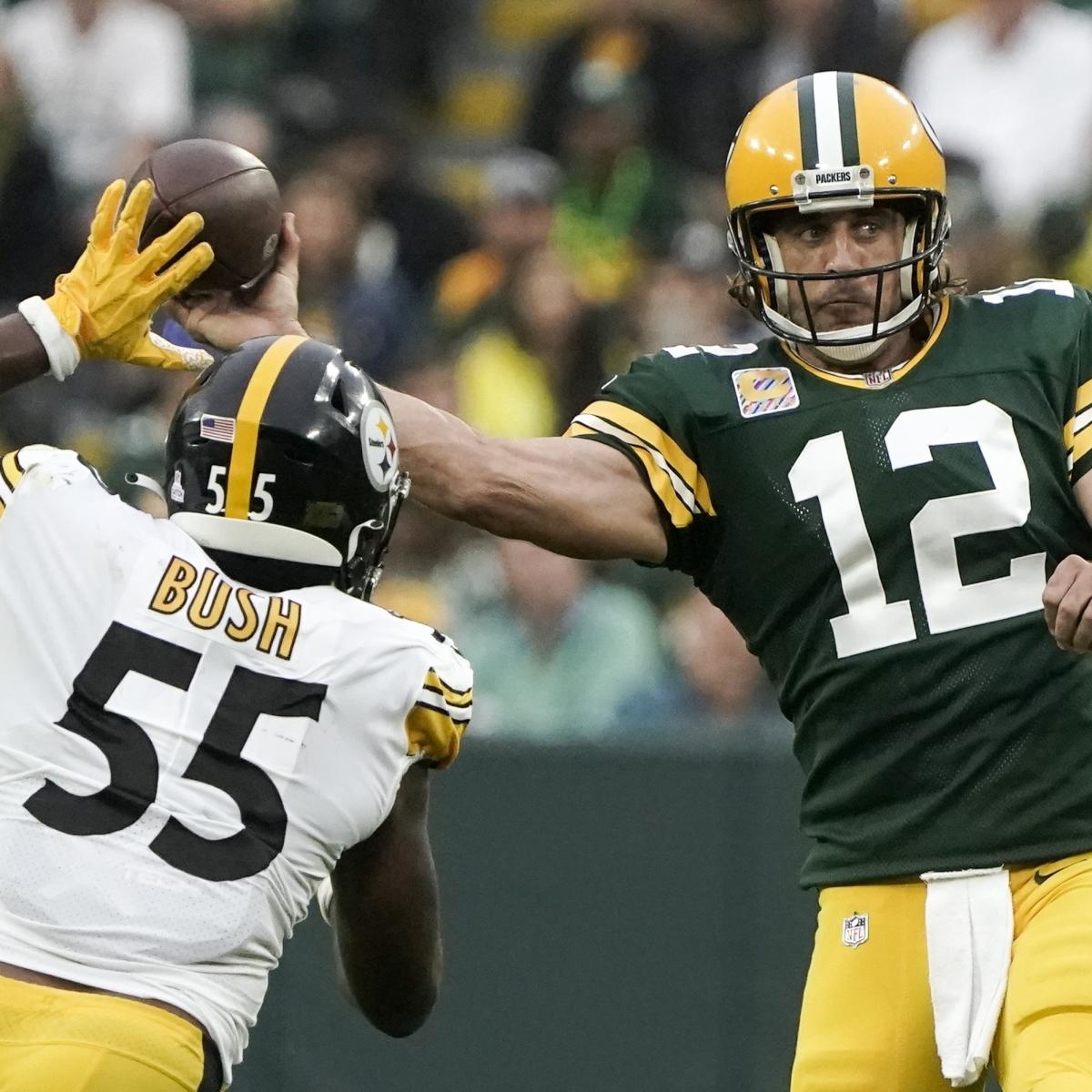 The Green Bay Packers’ lopsided season-opening loss in New Orleans is beginning to look more and more like an anomaly. They’ve bounced back in impressive fashion, putting together a winning streak that shows they’re still among the top teams in the NFC.

On Sunday, Green Bay notched its third straight victory by beating the Pittsburgh Steelers 27-17 at Lambeau Field. Since dropping their first game to the Saints, the Packers have also defeated the Detroit Lions and San Francisco 49ers.

Against Pittsburgh, Green Bay scored 17 points in the second quarter to take a seven-point lead into halftime, and it led the rest of the way. Aaron Rodgers powered the Packers’ offense by passing for 248 yards and two touchdowns while also adding a rushing score.

Aaron Jones remains the No. 1 running back on the Packers’ depth chart, but he’s not always going to have it going on the ground. Although he had three catches for 51 yards in Sunday’s win, he was less effective running the ball, finishing with 48 yards on 15 carries.

Green Bay now has another running back it can turn to in AJ Dillon, who is in his second NFL season but hasn’t had a ton of opportunities early in his career. That could change quickly, though, especially if he runs the ball as effectively as he did against the Steelers.

The 23-year-old had 15 carries for 81 yards to lead the Packers’ rushing attack. The only time he’s exceeded those numbers came in Week 16 of the 2020 season, when he had 21 carries for 124 yards and two touchdowns in a blowout win over the Tennessee Titans.

This year, Dillon had only 15 carries through Green Bay’s first three games. He doubled that number on Sunday while also continuing to impress his teammates.

“Smart kid, really smart kid, and that’s what I love about him,” Rodgers said, per Wes Hodkiewicz of the team’s official site. “He is really taking that step and becoming a three-down back.”

The Packers still have Jones, so they don’t need Dillon to fill that role quite yet, but having two backs of that caliber can only make this offense more dangerous.

Randall Cobb’s return to Green Bay had gotten off to a quiet start. The 11-year NFL veteran, who spent his first eight seasons with the Packers, was traded to the team this past offseason from the Houston Texans. But through his first three games of 2021, he hadn’t made much of an impact.

Entering Sunday, the wide receiver had four catches for 58 yards. Then, he showed he still has plenty left in the tank against the Steelers, as he hauled in five passes for 69 yards and two touchdowns, marking his first regular-season game with multiple TDs since Week 3 of the 2015 season.

Although Cobb started slow, he clearly still has a connection with Rodgers, which was a duo that had plenty of success during the 31-year-old’s first stint in Green Bay. It was only a matter of time before the two started producing together again.

“It’s kind of like riding a bike,” Cobb said, per Mike Spofford of the team’s official site. “You’ve been around each other for so long and you understand. He understands how I move, so whenever I’m getting ready to break on my route, he knows. It’s muscle memory.”

The Packers are always in search of other wide receivers to step up and take some pressure off Davante Adams. Perhaps Cobb can help do that if Sunday is any sign of things to come.

A third straight NFC North title could be in the cards for the Packers later this year. And it’s not too early to start thinking that will be the most likely possibility.

Green Bay is rolling, and there may not be a ton of competition at the top of the division.

The Packers (3-1) are off to an early lead over the Chicago Bears (2-2), Minnesota Vikings (1-3) and Detroit Lions (0-4). Chicago could pose a threat, but Minnesota has had a disappointing start and Detroit isn’t likely to factor into the battle for the NFC North crown.

With all the offseason chatter regarding whether Rodgers would return to Green Bay, along with the team’s abysmal Week 1 showing, it seemed this may not be the same team that has routinely excelled with its longtime QB at the helm. But a three-game winning streak has done plenty to change that thought process.

Now, the Packers are back on track heading into a stretch in which they play four of five games on the road, with those away matchups coming against the Cincinnati Bengals, Chicago Bears, Arizona Cardinals and Kansas City Chiefs.

It’s a difficult stretch, but if Green Bay rolls through most of those contests, it could be smooth sailing further down the line.

Denial of responsibility! NewsUpdate is an automatic aggregator around the global media. All the content are available free on Internet. We have just arranged it in one platform for educational purpose only. In each content, the hyperlink to the primary source is specified. All trademarks belong to their rightful owners, all materials to their authors. If you are the owner of the content and do not want us to publish your materials on our website, please contact us by email – [email protected]. The content will be deleted within 24 hours.
best sports newsnews update sportsnewsupdatePackerssports newssports updateTakeawaysWeek

Reversing course, CEO says Ozy Media will not shut down