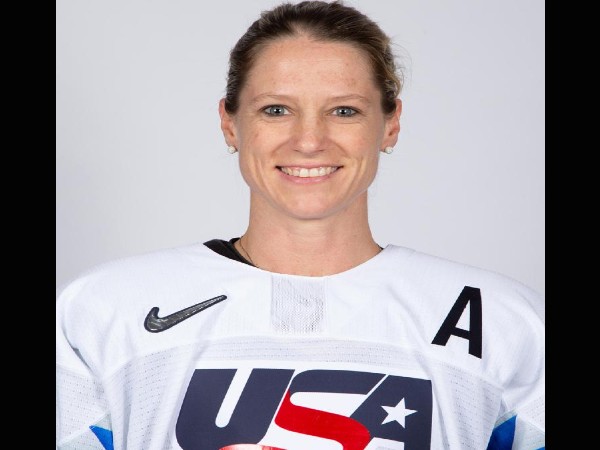 “Hockey has given me the most incredible memories, and as tough of a decision that this is, I know in my heart it is right,” Bellamy said. “So I’ve decided to step away from the game and start the next chapter in my life.”

The Massachusetts native also won silver at the 2010 and 2014 Olympics. The defenseman also played in nine International Ice Hockey Federation Women’s World Championships, one of only two players to win eight gold medals.

The 2020 worlds were pushed to this year and were rescheduled for May 6-16 in Nova Scotia, Canada, before local health officials scrapped plans to hold the tournament. Kelli Stack, a longtime teammate with Bellamy, was surprised by the decision with the 2022 Beijing Olympics only nine months away.

She said the decision was easier for Bellamy with so much unknown because of COVID-19. Playing in tournaments means being secluded in a hotel room off the ice.

Jocelyne Lamoureux-Davidson, who played with Bellamy for all of her careers with the US national team, said not being able to play because of the pandemic has been devastating for players, especially nearing the end of their careers. Bellamy had been training as always.

“There are such limited opportunities to compete, and then those means, the main reason we train the way we do, those competitions are taken away I think this is a difficult position to put those older players in,” Lamoureux-Davidson said.

Lamoureux-Davidson said Bellamy helped loosen up the locker room while competing hard every day, making her someone others hated to play or even practice against.

“The reason she’s been so impactful, not just on the ice, but her leadership off the ice is immeasurable, and it will be greatly missed on Team USA,” Lamoureux-Davidson said.

Bellamy made her first US national team after her freshman year. Bellamy was an assistant hockey coach at Merrimack College between September 2014 and July 2016. She also was part of the 2017 US team that threatened to boycott the world championships that year for a better contract.

Meghan Duggan, captain of the US Olympic gold medalists in 2018, said she’s thrilled for the woman who was one of the bridesmaids at her 2018 wedding and knows Bellamy will succeed in whatever she chooses to do next.

“The team in the program will certainly miss her from an honest perspective, from a leadership perspective, like she’s just a top-notch athlete,” Duggan said. “But with that being said, you know, her resume speaks for itself.”

Denial of responsibility! NewsUpdate is an automatic aggregator around the global media. All the content are available free on Internet. We have just arranged it in one platform for educational purpose only. In each content, the hyperlink to the primary source is specified. All trademarks belong to their rightful owners, all materials to their authors. If you are the owner of the content and do not want us to publish your materials on our website, please contact us by email – [email protected]. The content will be deleted within 24 hours.
3timeBellamybest sports newsHockeyKaceyMedalistnews update sportsnewsupdate

Behind Every Hero or Villain, There Is Tech Support