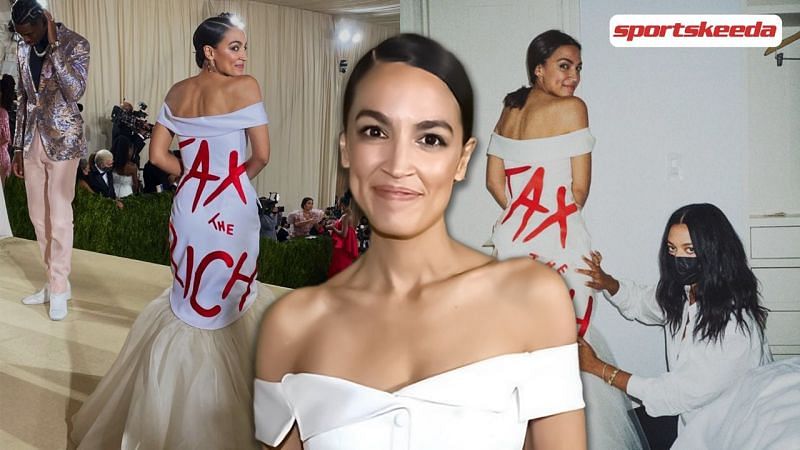 American politician AOC recently took the internet by storm after attending the Met Gala 2021 wearing a ‘Tax the Rich’ themed dress. She was also one of the few politicians to attend the star-studded event in its more than 70 year long history.

The theme of this year’s Met Gala revolved around celebrating American fashion. Therefore, the 31-year-old Democrat decided to send a debatable political message to America through her wardrobe.

AOC donned a white Brother Vellies gown with a ‘Tax the Rich’ message written in red on the back of her dress. The outfit was designed by Canadian fashion designer Aurora James. According to Vogue, the politician also carried a purse containing the same message as her dress.

AOC took to Instagram to share a picture of her Met Gala 2021 dress. She also explained the reason behind the choice of her outfit:

“The medium is the message. Proud to work with @aurorajames as a sustainably focused, Black woman immigrant designer who went from starting her dream @brothervellies at a flea market in Brooklyn to winning the @cfda against all odds – and then work together to kick open the doors at the Met. The time is now for childcare, healthcare, and climate action for all. Tax the Rich.”

However, AOC’s outfit sparked a huge debate online as netizens presented their contradictory opinions on the message. While some praised the politician’s choice of dress, others termed the move hypocritical, stating that her message contradicted the lavish nature of the $30,000 ticket fashion event.

Alexandria Ocasio-Cortez, aka AOC, is an American politician and social activist associated with the Democratic Party. She has been serving as the U.S. Representative for New York’s 14th congressional district since 2019.

She defeated Joe Crowley in 2018 and became the youngest woman to serve in the U.S. Congress at the age of 29. She was re-elected after defeating John Cummings in the 2020 elections. She is also one of the first female members of the Democratic Socialists of America to serve in Congress.

AOC is known for advocating several issues like workplace democracy, guaranteed federal jobs, medical care for everyone and free tuition in public colleges, among others.

She has also voiced her support for Joe Biden’s $3.5 trillion reconciliation package and consistently asked for increased taxes on wealthy Americans. She recently attempted to share the same message through her Met Gala outfit.

However, her controversial ‘Tax the Rich’ dress left the internet completely divided. While many appreciated her creative decision to spread the important message, others criticized the politician for ironically wearing the dress at one of the most expensive and grand fashion events in the world.

What makes @AOC a bigger fraud:

The “tax the rich” dress while she’s hanging out with a bunch of wealthy leftwing elites or the lack of masks after spending the past 18 months as one of the biggest authoritarian mask Karens in the country? https://t.co/pE84Pjquh1

When AOC was a bartender demanding that we tax the rich, people said that she was just jealous of them.

And now that AOC IS amongst the elite and STILL advocating to increase their taxes, those same people are dismissing her as a hypocrite.

idk why people keep bringing up the cost of a ticket to the met gala as if it’s an own on aoc and her “tax the rich” dress like y’all know the met gala is a fundraiser… for the met… right.

the ironic hilarity of wearing a “tax the rich” dress (simultaneously defanging the more historically radical “eat the rich” slogan) at an event that functionally runs on blood; an event that is hosted and attended by your bosses as an agent of capital, can’t evade my brain😭

AOC is a GENIUS at highly publicized Met Gala for the RICH in media & entertainment wearing a dress that says “Tax The Rich”. 😎👏🏽👏🏽👏🏽#MetGala pic.twitter.com/p7aK0BRKtU

The Democratic Socialist opened up about her wardrobe while speaking to Vogue on the red carpet:

“We can’t just play along, but we need to break the fourth wall and challenge some of the institutions. While the Met is known for its spectacle, we should have some conversations about it.”

She further told Reuters that she chose the outfit for Met Gala to spread the message among the A-listers present at the event:

As a plethora of contradictory reactions continue to pour in online, it remains to be seen if AOC will address the divided opinion of the internet about her Met Gala dress in the days to come.

Loading...
Denial of responsibility! NewsUpdate is an automatic aggregator around the global media. All the content are available free on Internet. We have just arranged it in one platform for educational purpose only. In each content, the hyperlink to the primary source is specified. All trademarks belong to their rightful owners, all materials to their authors. If you are the owner of the content and do not want us to publish your materials on our website, please contact us by email – [email protected]. The content will be deleted within 24 hours.
Loading...
AOCsbest sports newsdivideddressfeatureGalagrosslyinternet

Olympic medal is just beginning, we want to be world number one team: Shamsher Singh | Hockey News – Times of India