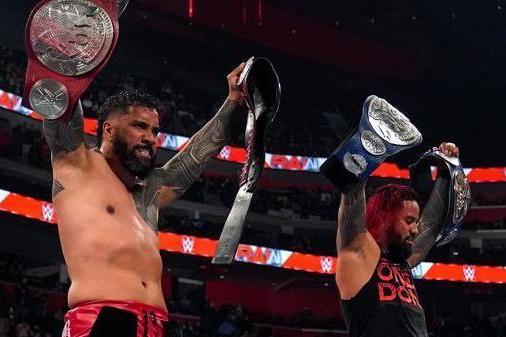 5 WWE Predictions Leading Up to SummerSlam 2022

While there’s a good chance WWE waits until SummerSlam—the next Big Four pay-per-view on its schedule—to make major headlines, there will undoubtedly be some interesting bumps along the way.

With Hell in a Cell and Money in the Bank on the horizon, and the potential for every show to change the game, what might be in store for the fans along the way?

Here are five predictions that could play out before The Biggest Party of the Summer on July 30.

After WrestleMania 38, The Usos pitched a tag team unification match against RK-Bro, which was set to go down at WrestleMania Backlash. Instead, WWE switched this to a six-man tag team contest with nothing on the line, but Randy Orton and Riddle said this week they are still interested in merging the titles.

At this point, a unification match has to happen.

Once it does, it likely sounds the death knell for the tag team division being split in two. Unlike how Roman Reigns carries both world titles and will inevitably drop one of them to allow Raw and SmackDown to have their own top star, WWE doesn’t view the tag team titles in the same way.

The WWE Women’s Tag Team Championship is the best indicator of this. The company still doesn’t care enough about that set of belts to keep more than one team on retention.

After The Usos beat RK-Bro, it will be time to retire the red and blue belts in favor of a new design that isn’t brand-specific.

Once The Usos take RK-Bro’s Raw Tag Team Championship, the lineup of titleholders will be set for SummerSlam, with only two exceptions.

Dana Brooke dropping the 24/7 Championship at least once in the next few months is a certainty. She’ll likely win it right back a moment later, but it will still be the start of a new run.

But the real story will be Ricochet, who will be the only person to drop their belt before SummerSlam.

The Intercontinental Championship has had a rough year, after not appearing on any pay-per-views and barely having a presence on television. It seems like WWE puts the belt on someone to make them relevant but doesn’t want to tell any stories with that Superstar, so they get sidelined for weeks at a time.

Winning the IC title hasn’t helped Ricochet much. He’s only had short feuds with Los Lotharios and Jinder Mahal, and beating Shanky isn’t on par with Theory being front and center with the United States Championship.

In all likelihood, WWE will reach a point in the next two months where it will decide The One and Only has held the belt long enough and he’ll drop it to someone the company does want to focus on, such as Gunther.

The latest commercial for Money in the Bank has left fans scratching their heads. Why does Cody Rhodes say that is “where one lucky male and female Superstar will win the chance to main-event WrestleMania” of all things?

That is language reserved for the Royal Rumble match, not Money in the Bank. The briefcase entitles that Superstar a title opportunity at any moment they choose.

Granted, using it to main-event The Show of Shows has always been an option, but it’s improbable for many reasons.

First, it ruins the gimmick. The entire fun of MITB is the spontaneity of the cash-in. If it no longer can happen any time, why bother with it? It just becomes a No. 1 Contender’s match that the winner must wait nine months for.

Second, why would WWE simultaneously force that to be the WrestleMania plan and ruin the build for two of the top title matches so far in advance? It saps all the energy out of The Road to WrestleMania.

It also would render Royal Rumble worthless for the men’s titles, as there isn’t a second champion to be challenged while Roman Reigns holds both. That would just mean a Triple Threat is guaranteed and the men’s Money in the Bank winner knows months ahead of time he won’t get a one-on-one shot.

But while this seems like WWE is heading in this completely illogical direction, it should come out soon enough that this was just poor wording in the promo in an attempt to hype up the WrestleMania branding, rather than an indication that the rules are changing.

Money in the Bank will remain the same gimmick as it always has been, but WWE just hasn’t bothered to clarify this yet.

After recruiting Damian Priest and Rhea Ripley to his side, Edge is looking to bring even more Superstars to his Judgment Day faction.

One prediction here would be that this doesn’t come to pass, and no fourth member will join The Judgment Day.

If there are any plans to bring another on board, though, the name who makes most sense is T-Bar.

The former Retribution member a perfect fit. Those in The Judgment Day all have an ax to grind about not getting the respect they deserve, and T-Bar is a talented star who is going to waste on Main Event.

T-Bar would make for an imposing threat to team with Priest and back up Edge. It could be the one thing that saves his WWE career.

Sometimes, WWE builds up the return or debut of someone, only to swerve fans at the last minute and render all those weeks pointless. It happened with Emmalina being immediately dropped and Brodus Clay going from a monster to a dancing babyface. The same could be happening with Lacey Evans.

For weeks, she’s been telling her story of how much strife she’s gone through in her lifetime. WWE is seemingly setting her up for a major babyface shift.

However, her return on SmackDown started with ring announcer Samantha Irvin saying Evans has asked the fans to show “the proper respect” to her. If the intention was to make sure she would be cheered, it was the most heelish way of going about it.

Babyfaces don’t ask to be cheered. They earn that. Heels are the ones who boast that the fans should embrace them.

Then, airing a vignette on Raw felt like an indication she was being sent to the red brand, rather than staying on SmackDown. Why would that be the case? Perhaps that’s because WWE decided to go in a different direction late on.

Instead of a face who would feud with someone like Charlotte Flair or Natalya on Friday nights, now she’ll be a heel who boasts that she’s better than everyone else for having gone through more, and it will be up to Bianca Belair to cut her down to size as a filler feud after Hell in a Cell.

Anthony Mango is the owner of the wrestling website Smark Out Moment and the host of the podcast show Smack Talk on YouTube, iTunes and Stitcher. You can follow him on Facebook and elsewhere for more.

Denial of responsibility! NewsUpdate is an automatic aggregator around the global media. All the content are available free on Internet. We have just arranged it in one platform for educational purpose only. In each content, the hyperlink to the primary source is specified. All trademarks belong to their rightful owners, all materials to their authors. If you are the owner of the content and do not want us to publish your materials on our website, please contact us by email – [email protected]. The content will be deleted within 24 hours.
best sports newsleadingnews update sportsnewsupdatePredictionssports newssports updateSummerslam

Pakistani Gamers Want a Seat at the Table