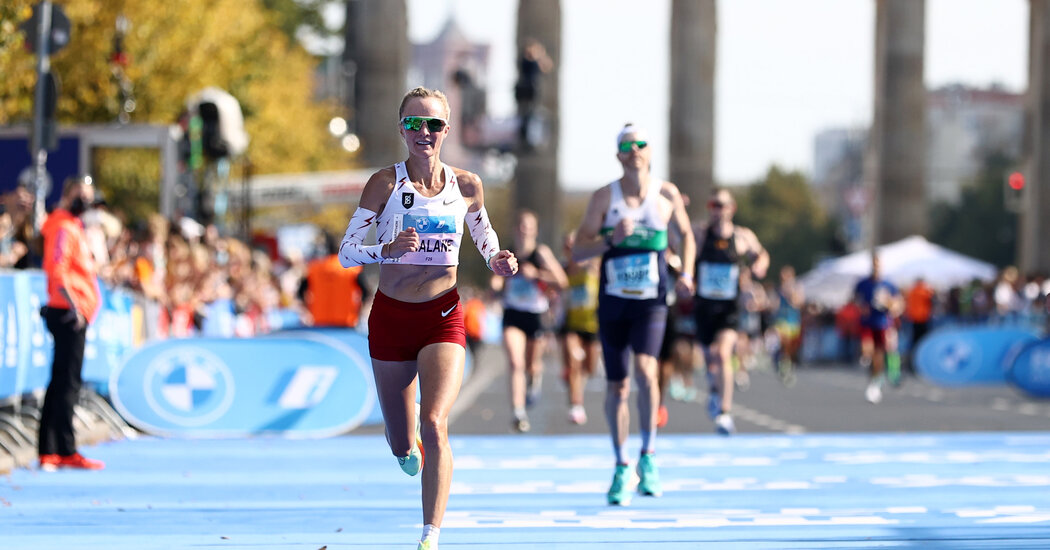 6 Marathons in 6 Weeks? Shalane Flanagan Has 4 More to Go, and 2 This Weekend.

This weekend’s double has loomed over her training. She hunted for training spots in sweltering Tokyo during the Olympics, where several of the athletes she coaches were competing. She was not allowed outside the Olympic bubble, though she could run on the warm-up track with her athletes outside the Olympic Stadium — until it was clogged with hurdlers and sprinters. The U.S. team’s training facility was a 45-minute bus ride away. She missed several days of training, and never had a run that lasted more than 10 miles while in Japan.

She tried to mimic a shorter version of the Chicago-Boston double last month, running 20-plus miles on a flat course one day, then 21 miles at a 6:40 per mile pace on hilly terrain the next day. Changing her 17-month-old son’s diapers and working in her garden after the first run served as a stand-in for what could be a hectic journey from Chicago to Boston.

In Berlin, where she started conservatively, Flanagan averaged about 6:40 per mile for the first third of the race as she ran with her physical therapist, Colleen Little, a sub-three-hour marathoner in her own right. But on Berlin’s flat course on a not-too-sunny day, she hit the gas in the second half, clicking off a 5:30 mile at one point.

Speaking from London days later, she said her back was sore, probably from lugging her son around. Otherwise she was fine. Still, she said, she was planning to slow down for London.

She landed in a corral with the sub-elite men, got caught in their wave of speed, lost track of her splits and ended up passing the halfway mark in 75 minutes. Whoops.

She told herself it was time to back off, but barely did, even though she knew the door to the pain cave might be just around the corner. Her body started to quit around the 20-mile mark. Her quads were on fire, and she could barely lift her legs. She even started walking in the last mile because she thought she was going to fall over. She finished in just over 2:35.

“That last five kilometers was absolutely brutal,” she said on Tuesday.

Her legs had started to recover, she said, but her right foot was a bit janky. It felt as if she had rolled her right ankle even though she knew she hadn’t.

Denial of responsibility! NewsUpdate is an automatic aggregator around the global media. All the content are available free on Internet. We have just arranged it in one platform for educational purpose only. In each content, the hyperlink to the primary source is specified. All trademarks belong to their rightful owners, all materials to their authors. If you are the owner of the content and do not want us to publish your materials on our website, please contact us by email – [email protected]. The content will be deleted within 24 hours.
best sports newsFlanaganMarathonsnews update sportsnewsupdateShalanesports newssports update

Retrospec’s Folding Ebike Is Respectable but Far From Perfect