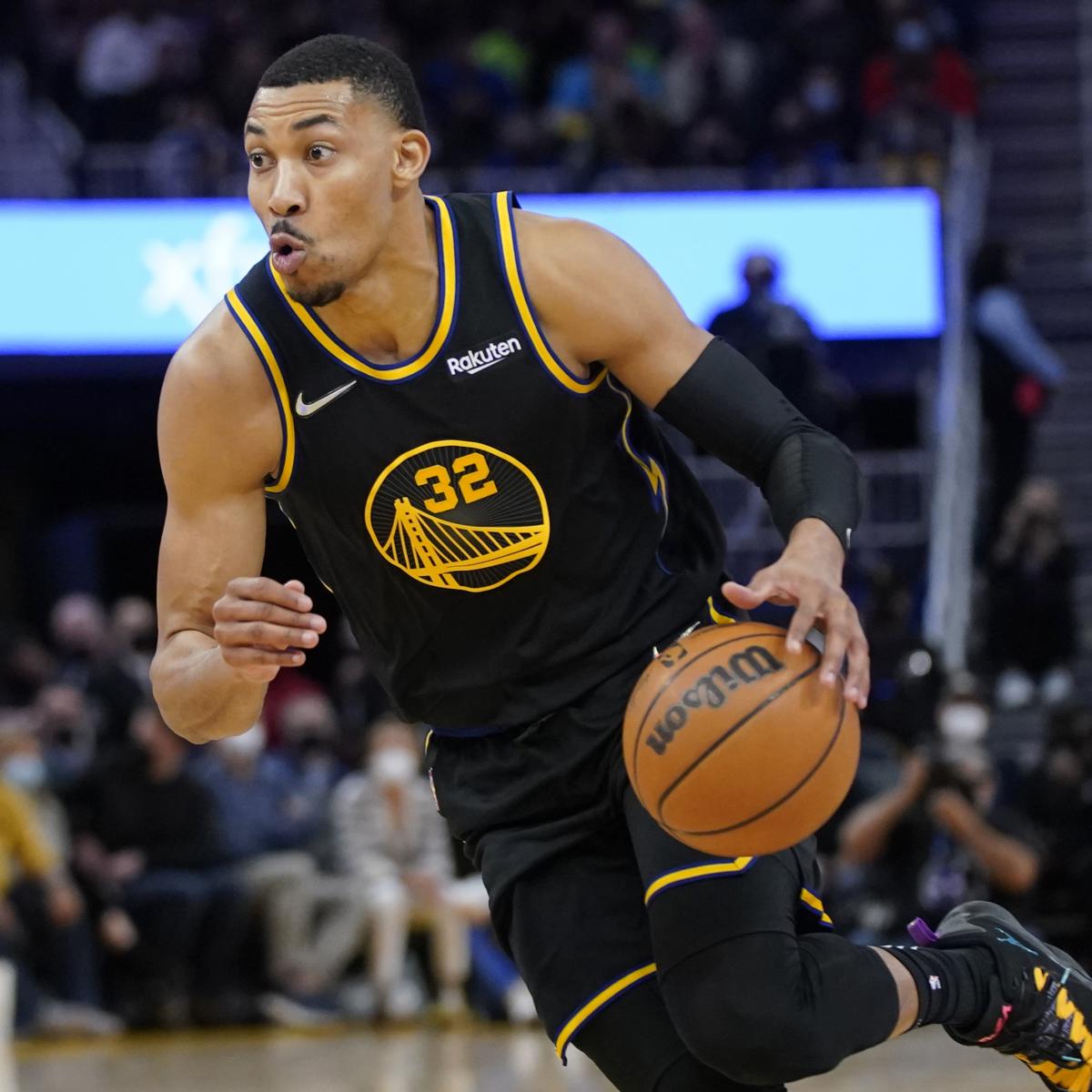 NBA executives in search of free-agent bargains must be looking at the 2022 offseason as a perfect storm.

Only five teams are projected to have more than $20 million in cap space, and most of those will cut into some of it to retain their own free agents. That will leave the $10.3 million mid-level exception or the $6.3 million taxpayer mid-level exception as most teams’ main talent-acquisition tools. And once those are used up, it’ll be down to smaller cap exceptions and minimums to fill out rosters.

Across the league, we’re going to see players sign deals that, in most other offseasons, they’d view as low-ball offers.

A lot of players will be underpaid, and the seven we’ve covered here will provide maximum bang for the buck.

Otto Porter Jr.’s 2021-22 numbers don’t look all that different from the ones he produced the season before, when he looked out of shape and slipped into obscurity with the Orlando Magic after coming aboard in the trade that sent Nikola Vucevic to the Chicago Bulls.

The 28-year-old, signed to a minimum deal with the Golden State Warriors, averaged 8.2 points, 5.7 rebounds and 1.5 assists in 22.2 minutes per game—no better on the surface than the 9.7 points, 5.4 rebounds and 2.0 assists he put up between the Bulls and Magic.

Look a little deeper and you’ll see why Porter should be in much higher demand this offseason than last. For starters, he took a larger share of shots from beyond the arc than ever before, and he was especially deadly above the break, where he drilled 39.0 percent of his attempts. Slimmer and more mobile, Porter also finished at a career-best 72.0 percent clip at the rim.

The biggest change was positional, as Porter completed his transition from wing to small-ball big. He played zero minutes at the 3 for the first time in his career and actually spent more than a third of his court time as a center in Golden State’s downsized attack. He was an integral rotation piece on a contender and stayed healthy enough to log 63 games, his most since 2017-18.

Porter remained a phenomenal rebounder for his position and continued to post elite steal rates, using his length and active hands to disrupt opposing offensive players.

Between his ho-hum counting stats and the stigma of playing on a minimum deal (plus an ugly injury history that may still be on teams’ minds), Porter could find it difficult to secure a significant raise. The tax-hit Warriors know how valuable he is, but they may not have the stomach for a pay bump. Smart teams will realize Porter is worth something close to the mid-level exception and pounce.

Gary Harris’ $20 million salary wasn’t much of a bargain last year. But at half that rate (or maybe even less), the 27-year-old wing might be one of free agency’s biggest steals.

If you look around at the playoff teams still standing, they’re chock-full of wings and forwards who can space the floor and defend multiple positions. Harris shot 38.4 percent on 5.0 long-range attempts per game in 2021-22, and while he spent most of his time covering opposing shooting guards, the Magic assigned him to point guards and small forwards for over 20 percent of his matchup minutes.

Consider both the shooting and defending boxes checked.

Harris might suffer from the standard he set for himself a few years ago, when he looked like a developing star for the Denver Nuggets. Injuries slowed him down and ultimately rendered his four-year, $84 million contract an overpay, but Harris showed this year with the Magic that he could still be a solid starter or premium reserve rotation piece.

It almost feels like the league has forgotten about Harris, but he could land in the right spot for as little as the taxpayer’s MLE and easily perform like a guy who should be making twice that much.

Isaiah Hartenstein’s track record isn’t long, but it is distinguished. He was among the league’s very best reserve big men this season, specializing as a rim-protector and passer to provide the Los Angeles Clippers with high-end two-way play from the center spot.

Hartenstein’s assist percentage was in the 92nd percentile at his position, and the only player 7’0″ or taller with a higher assist percentage was Joel Embiid. A center who can operate as a hub might not seem like a big deal, but it allows for creative lineup configurations that include extra shooting or size. At least against backups, any team with Hartenstein can survive without a conventional point guard.

Nobody pays big money to non-superstar 5s anymore, and Hartenstein’s averages of 8.3 points, 4.9 rebounds and 2.4 assists probably won’t make him the exception. But he’s just 24 and fresh off a breakout campaign that also saw him dabble with a three-point shot (14-of-30 on the year). We might be looking at a quality starting center hiding in plain sight.

If Hartenstein can be had for under $5 million per season, and if he winds up someplace with an open starting spot, he could be among the best values in the league.

Taurean Prince popped early, averaging 14.1 points and getting noticed for his wing defense in his second season. He then quickly became a bit overrated as a stopper and a little overpaid with a two-year, $25 million deal from the Brooklyn Nets in 2019.

Prince bounced around after that, playing for three teams in the last two years. He’s not a reclamation project at age 28, but he’s exactly the kind of overlooked contributor that a shrewd front office could scoop up. Even if he’s not going to be the first-unit combo forward some expected earlier in his career, Prince proved this season that he can provide value to a winner in a limited role.

For the first time since his rookie year in Atlanta, Prince mattered for a playoff team. He averaged 20.7 minutes per game for the Minnesota Timberwolves after the 2022 All-Star break and remained part of the postseason rotation. He’s even had some surprising displays of shot-creating skill—intriguing, even if any team signing him will be happy with solid three-and-D play.

Prince is a career 37.1 percent shooter from distance, and he ranked in the 83rd percentile among forwards in points per shot attempt in 2021-22. He’s not perfect, but he is 6’7″, reasonably mobile and can make an open three. That package is worth more than the minimum, which is all Prince may be in line to get on his next deal.

For his career, Danuel House Jr. has averaged the same amount of playing time in the regular season and playoffs: 24.6 minutes per game. That sounds more like a bland fact than an endorsement, but it’s an important sign for free-agent suitors.

It means House’s game holds up when the stakes are high.

Another illustration of that point showed up in this very postseason, as House’s athleticism and perimeter defense made him a larger part of the Utah Jazz’s rotation than anyone could have expected when the team signed him in February.

A career 36.6 percent three-point shooter who can survive against points guards, wings and power forwards, House is at home in a playoff rotation.

For roughly the millionth time, we got confirmation that big wings who can guard and make open shots are always the hottest commodity in the role-player market. If you want to do anything in the postseason, you need a bunch of them.

The lowly Houston Rockets waived House, and it’s true he hasn’t been the most reliable teammate during his career. Both of those factors should suppress the 28-year-old’s price, keeping it in minimum-salary range.

That’ll seem like the appropriate level of compensation…right up until House is piling up major minutes for a playoff team next April.

Nothing takes a player off the radar like missing two straight seasons. Technically, T.J. Warren played four games in 2020-21, but you get the idea: He hasn’t exactly been a key part of the NBA discourse for a while.

When we last saw Warren healthy, he was tearing up the bubble and looking like an All-Star-caliber two-way forward. He had progressed to that point by extending his range, shooting 42.8 percent from beyond the arc in 2018-19 after clocking in under 30.0 percent in three of the prior four seasons.

Then, in 2019-20, as the bulky 6’8″ scorer again shot over 40.0 percent from deep (40.3 percent, to be precise), he also made strides as a defender. Warren climbed to the break-even mark in Defensive Box Plus/Minus for the first time and posted the best on-off defensive rating swing of any full season in his career.

A series of foot injuries derailed that progress, and now Warren will hit the market as one of the biggest risk/reward plays in recent memory.

The fact that he’s listed here isn’t necessarily a bet that Warren is going to pick up his star trajectory right where he left off. Instead, it’s an acknowledgment that the concerns about his health could create a major opportunity.

Some percentage of teams may have no interest at all in a player coming off two lost years, which could thin the competition and keep offers low. And with so many capped-out teams set to use the MLE as their main talent-acquisition chip, some will decide they can’t commit such a valuable resource to someone with Warren’s injury history. If all that trepidation and resource management prevents a bidding war, some risk-tolerant team could wind up with a high-end starter at a fraction of the normal price.

We’ll close it out with a deep cut.

Damian Jones is now six seasons into his career and has yet to play 1,100 minutes in any single campaign. The athletic, rim-running center came closest this past year with the Sacramento Kings, logging 1,017 minutes and setting career highs with 8.1 points and 4.4 rebounds.

Completely lost on both ends in his first three seasons after the Golden State Warriors took him 30th in the 2016 draft, Jones has become a surprisingly savvy offensive weapon. At one time, he was only a threat to score on spoon-fed lobs and putbacks. Dribbling, passing and decision-making were all out of the question.

Now, the game has slowed down for him, and Jones’ skills have expanded beyond “catch and dunk.” He hit 51.6 percent of his mid-range shots and 34.5 percent of threes. And four of his five career games with at least five assists came this past year.

Fortunately for bargain hunters, nobody noticed Jones’ quiet progress because, well…he did it in Sacramento. With the Kings tied to Domantas Sabonis as a starter and Richaun Holmes making eight figures per year through at least 2023-24, Jones may not be a retention priority. A team that saw his play last year as a sign of ongoing growth, rather than an anomaly, could probably get Jones for the minimum and count on low-end starter production.

It’s never a bad idea to bet on a player who is clearly still getting better—especially when placing that bet won’t break the bank.

Denial of responsibility! NewsUpdate is an automatic aggregator around the global media. All the content are available free on Internet. We have just arranged it in one platform for educational purpose only. In each content, the hyperlink to the primary source is specified. All trademarks belong to their rightful owners, all materials to their authors. If you are the owner of the content and do not want us to publish your materials on our website, please contact us by email – [email protected]. The content will be deleted within 24 hours.
bargainsbest sports newsFreeAgencyNBAnews update sportsnewsupdatesports newssports update

samsung: Samsung to upgrade its 200MP camera sensor, expected to arrive on the upcoming galaxy flagships – Times of India

How to Embrace Despair in the Age of Climate Change