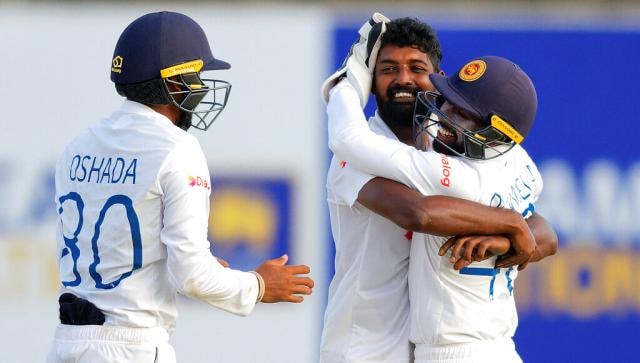 The victory at Galle helped Sri Lanka to level the Test series 1-1. Prabath Jayasuriya was awarded the player of the series for scalping 17 wickets in 2 Tests.

After they lost the first Test against Pakistan, Sri Lanka bounced back in style and reconquered their bastion at Galle once again today. The hosts won by 246 runs after the Babar Azam-led side collapsed on the final day and were bundled out for 261.

Prabath Jayasuriya once again emerged as the hero and took another five-wicket haul. The spinner has taken his fourth five-for in only six innings and has emerged as the ace bowler for his side in recent Tests.

Earlier in the match, Dhananjaya de Silva had scored a ton to power Sri Lanka to 360. Combined with a 147-run lead, the hosts set up a mammoth 508 on the scoreboard.

Pakistan looked reasonably confident after their victory in the last Test at Galle. At one point, the visitors looked all set for a draw with the fourth day ending with them at 89/1.  However, Ramesh Mendis, who scalped 5 wickets in the first innings, and Jayasuriya combined to scythe through Pakistan’s batting line-up on Day 5. Babar Azam was the top scorer at 81, but none of the other batters could stay at the crease long enough to give him some support.

At lunch, Pakistan were 1885/5, with skipper Azam and Mohammad Rizwan at the crease. But Jayasuriya sent Azam back to the hut soon after. Then, it was all easy pickings for the hosts. From 205/6, Pakistan limped to 261 before they were bowled out.

This was in stark contrast to the last Test, when Pakistan became the first team to score 300-plus at Galle in the fourth innings. The visitors had won the last fixture on the back of great knocks by Abdullah Shafique and Azam.

Here is how Twitter reacted to Pakistan’s collapse on Day 5:

The victory at Galle led Sri Lanka to level the Test series 1-1. Prabath Jayasuriya was awarded the player of the series for scalping 17 wickets in 2 Tests.

Denial of responsibility! NewsUpdate is an automatic aggregator around the global media. All the content are available free on Internet. We have just arranged it in one platform for educational purpose only. In each content, the hyperlink to the primary source is specified. All trademarks belong to their rightful owners, all materials to their authors. If you are the owner of the content and do not want us to publish your materials on our website, please contact us by email – [email protected]. The content will be deleted within 24 hours.
2ndbest sports newsbundleClassiccollapseFirstcricketFirstpostLanka

One of Rajasthan Royals’ owners slapped me across face 3-4…