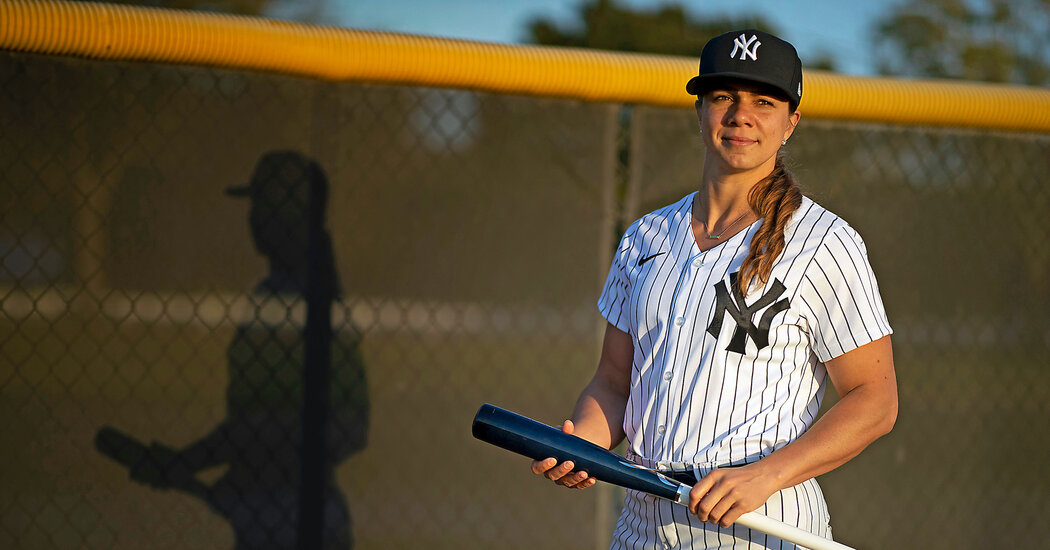 A Groundbreaking Hiring Caused Little Fuss: ‘Everybody Was on Board’

Soon after the news broke that Rachel Balkovec had been hired to become the first woman to serve as a manager in affiliated professional baseball history, the messages poured in. She heard from players she worked with as a hitting coach in the Yankees’ minor leagues the past two years. She heard from Jean Afterman, the team’s longtime assistant general manager whom Balkovec had looked up to and sought guidance from.

But the message that thrilled Balkovec most was from Billie Jean King, the former tennis star and activist who fought for equal gender rights. On Sunday night, King wrote in part on Twitter, “History made in baseball!”

Balkovec’s reaction? “OK, I can die now. My career’s over. Billie Jean King congratulated me.”

Balkovec, 34, recalled this while on a video call with over 100 journalists Wednesday, the day after her hiring as the 2022 manager of the Tampa Tarpons, the low Class A affiliate of the Yankees, was officially announced. Major league teams don’t normally hold news conferences for their minor league managers, but this was a groundbreaking hire and a groundbreaking coach.

The Yankees first hired her for their farm system in November 2019, making her the first woman hired as a full-time hitting instructor by a big-league team. After impressing Yankees officials and players, she will now lead a team.

“The first word that comes to mind in this situation is just gratitude,” Balkovec said before she rattled off the names of some people who paved a path for her.

She pointed to the Yankees and their general manager, Brian Cashman, for setting an example with the past hires of Kim Ng and Jean Afterman as assistant general managers. She named the Cardinals officials who hired her as a strength and conditioning coach “when there were no women around and it was very much the dark ages in that regard.” And she thanked her parents, who lent her money when she had little and helped her chase her dreams in a male-dominated industry that was hard to break into.

“My father and mother, they deserve an award,” Balkovec said. “They literally raised three girls to be absolute hellions. And we didn’t know and I literally didn’t know that wasn’t possible.”

During her talk, which lasted nearly an hour, she recounted stories of her journey and spoke of the steps she’d taken to continue her path to where she now stands.

She added later, “Just the way that people react to me and the way that they talk to me, it’s becoming more normal. It’s pretty apparent and it’s just exciting to see how much progress we’ve made. We definitely have a lot of room to grow. But it’s really exciting. There were many times in my career where I felt extremely lonely and I literally didn’t have anyone to call who had been going through the same experiences.”

The decision to promote Balkovec was easy, said Kevin Reese, the Yankees’ vice president of player development. He had gathered some of his top lieutenants to discuss roles for employees at different minor league levels for the upcoming season. Everyone spoke highly of Balkovec, including Dillon Lawson, the Yankees’ new major league hitting coach who first worked with her in the Houston Astros’ farm system and lured her to the Yankees two years ago.

“The funny thing,” Reese said, “and I’ve talked with a number of people about like, ‘Hey, was this tough? Was there a lot of debate?’ Everybody was on board.”

Asked if he could have imagined a female manager, say, 10 years ago, Reese, a former Yankees’ outfielder, said no.

“I’ve gotten to work with Jean and some of the people that Rachel mentioned before and there’s no reason that this shouldn’t have been considered previously,” he said. “But there weren’t necessarily as many opportunities for people — men, even — who didn’t have a playing background. More and more of those people are showing up today and showing that they have a lot of value.”

When Cashman hired Ng to be his assistant general manager in 1998, he did so, he said, because she was the best person for the job, but he was surprised by the widespread attention that hiring received.

“Back then, I remember saying, ‘Well, hopefully we can get to a point where this is no longer newsworthy, it’s just kind of happenstance,’” he said. All these years later, he said, he noticed a similar reaction to Balkovec’s hiring.

Added Balkovec: “I’ve been in baseball for 10 years. So it feels a little interesting to me that there’s so much attention now.”

Cashman said that gender equity wasn’t considered as much in the past in the baseball industry — “but that doesn’t make it right.” He credited pioneers in and around the sport such as the Boston Red Sox executive Elaine Weddington Steward, the first woman hired as an assistant general manager in Major League Baseball, or Ng, now of the Miami Marlins, the first woman hired as a general manager.

“There’s always someone that emerges that’s not afraid, that wants it and that goes after it, and is strong enough to take it,” he said. “Unfortunately in some categories it takes longer than others. And unfortunately society had failed to recognize the strength and equal power, if not more power, that women possess.”

Balkovec’s hiring was historic enough to prompt Rob Manfred, the M.L.B. Commissioner, to issue a statement of congratulations and well wishes. After calling Ng’s hiring as a G.M. in 2020 a step forward, he said, “I am pleased to see the game continue to make important progress at various levels.”

Manfred also commended Sara Goodrum, the Astros’ new director of player development, and the other women working in the sport “who are setting a positive example for our next generation of fans” and who proved that baseball was for all. Balkovec said she took that responsibility seriously.

Denial of responsibility! NewsUpdate is an automatic aggregator around the global media. All the content are available free on Internet. We have just arranged it in one platform for educational purpose only. In each content, the hyperlink to the primary source is specified. All trademarks belong to their rightful owners, all materials to their authors. If you are the owner of the content and do not want us to publish your materials on our website, please contact us by email – [email protected]. The content will be deleted within 24 hours.
best sports newsboardcausedFussGroundbreakinghiringnews update sportsnewsupdate