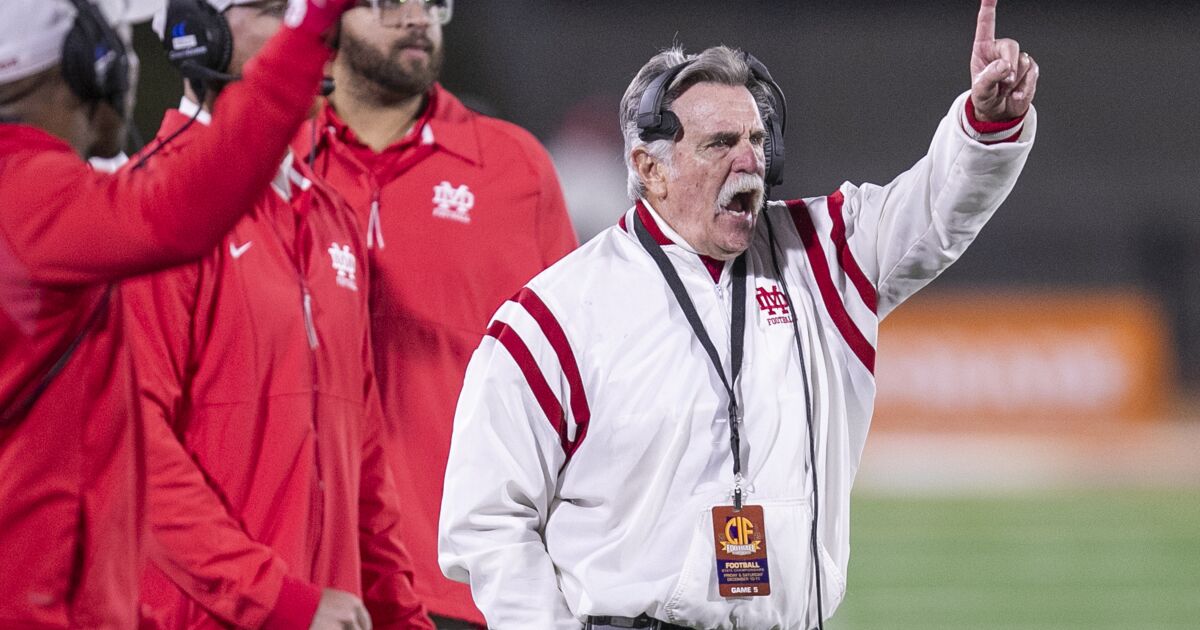 With the announcement that Bruce Rollinson will be retiring as football coach at Santa Ana Mater Dei High at the conclusion of the 2022 season, the focus soon will be on finding a replacement.

Rollinson has been coaching for 34 years. He’s a Mater Dei graduate. The school doesn’t like bringing in outsiders, but its new president, Michael Brennan, came from Anaheim Servite High and won’t be limited to only looking for coaches with Mater Dei ties.

Here are some names that will likely come up in the process of finding a successor:

Lenny Vandermade: The former All-American Mater Dei lineman and USC graduate has coached at the college level. He was recently an offensive quality control analyst for the Trojans and still has close ties to Mater Dei and Rollinson. He’d be a popular choice.

Taylor Kelly: He is Mater Dei’s offensive coordinator and quarterbacks coach. He has been a key figure in the development of junior quarterback Elijah Brown. Kelly is only 31, which would be a generational change in the program if he were hired.

Matt Logan: Prying him away from Corona Centennial has been on the wish list for years of some Mater Dei supporters, especially when Rollinson went 17 consecutive seasons without winning a title. Now it’s unlikely to happen because Logan is heavily invested in the public schools retirement program and would have to take a financial hit to leave Centennial.

Jason Negro: Yes, he’s the head coach at rival Bellflower St. John Bosco, but his name has been on the rumor list. It’s doubtful he’d leave his alma mater for Mater Dei.

Troy Thomas: He has twice worked with Brennan at Servite, so if he wanted to put his stamp on the Monarchs’ program, Thomas would be the ideal transitional candidate. It was announced on Monday that he is leaving Servite.

Jason Miller, Bellflower.: He took over a 2-7 team and has Bellflower in the Division 11 playoffs in his first season. He previously had success at Compton Dominguez and Gunn High in Northern California and would be the first Black head coach in the Trinity League.

Denial of responsibility! NewsUpdate is an automatic aggregator around the global media. All the content are available free on Internet. We have just arranged it in one platform for educational purpose only. In each content, the hyperlink to the primary source is specified. All trademarks belong to their rightful owners, all materials to their authors. If you are the owner of the content and do not want us to publish your materials on our website, please contact us by email – [email protected]. The content will be deleted within 24 hours.
best sports newsBrucecandidatesDeihighMaternews update sportsnewsupdate

Elon Musk has laid off thousands of Twitter contractors