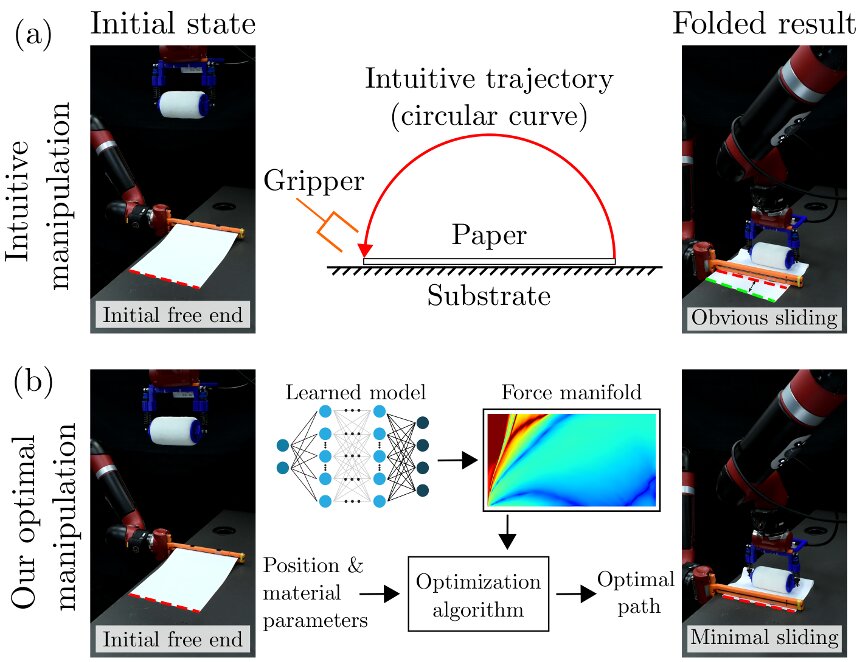 To tackle different real-world tasks, robots should be able to handle and manipulate a variety of objects and materials, including paper. While roboticists have successfully improved the ability of humanoid robots or robotic grippers to handle several materials, paper folding remains a rarely explored topic within the robotics community.

A research team at the University of California, Los Angeles (UCLA) has recently created a new computational framework that allows a robot to tackle paper folding and the Oriental art of origami. This framework, introduced in a paper pre-published on arXiv, combines a deep learning algorithm with physics simulations.

“Although there has been considerable robotics research on deformable material handling, the manipulation of paper has been a relatively unexplored topic, despite the ubiquity of paper in daily life,” Dezhong Tong and Andrew Choi, two of the researchers who carried out the study, told Tech Xplore.

“The two most relevant studies on this topic were conducted by research teams at Aalto University in Finland and at Bielefeld University in Germany. The first deals with fabrics, which are much easier to manipulate than paper, while the second focuses on folding paper, but develops a complicated robot system involving human-like manipulators that is computationally onerous.”

The recent work by Tong, Choi and their colleagues was motivated by the lack of straight-forward and effective robotic paper folding systems. The team’s primary objective was thus to create a simple but promising system that could fold sheets of paper using a single robotic manipulator.

The robot control strategy proposed by the researchers “teaches” robots behaviors from a physical standpoint, so that they can better tackle tasks that involve physically insightful manipulation. More specifically, the team trained an artificial neural network (ANN) within an offline environment involving physics simulations of paper folding. During training, the network learned how paper “behaves” when it is subjected to different grasps from different physical positions.

“The training data was generated purely via physics-based computer simulations,” Tong and Choi explained. “Subsequently, online and in real-time, the trained neural network rapidly made predictions that result in optimal manipulation trajectories. Another key novelty is our use of scaling analysis, a technique adopted from mathematical physics, to nondimensionalize the predictions of the neural network.”

In this article, the term “non-dimensionalization” refers to making the input and output independent of their units, through a mathematical physics technique. The non-dimensionalized quantity is unitless. Therefore, the changing the units of the system will not influence the analysis.

In the context of this study, this process has notable advantages. It improves the generalization of the control framework, allowing the robot to fold sheets of paper of different thickness or with different geometries, without requiring training for each of these types of paper.

In addition, non-dimensionalization reduces the “dimensionality” of the paper folding problem. In other words, it makes it easier to train the neural network while improving its real-time performance.

“Given the highly nonlinear behavior of many deformable objects, roboticists have struggled to develop effective methods to control robots in ways that satisfy real-world manipulation tasks, such as paper folding,” Tong and Choi said.

“An exciting finding of our work is that machine learning algorithms and physics-based scaling analysis are complementary and highly effective for the purposes of robotic deformable object manipulation. On the one hand, conventional mathematical physics models suffer from intractable computational cost when dealing with objects such as paper, thus rendering online control infeasible. On the other hand, naively employing machine learning to mitigate the problem results in a control scheme that works only for scenarios within the scope of the training data (i.e., performance will decline drastically even if the material of the manipulated deformable object is modified).”

The recent work by this team of researchers highlights the value of combining scaling analysis with deep learning when addressing real-world robotic object manipulation problems. Their initial findings are very promising, both in terms of accuracy and efficiency.

In the future, the framework created by Tong, Choi and their colleagues could help to significantly enhance the object manipulation capabilities of robots. For instance, it could allow them to handle a broader range of objects in advanced ways, including sheets of paper and items made of other deformable materials.

“To our knowledge, our framework is the first to exploit this synergistic approach, which we believe can be widely used in a broad variety of deformable manipulation tasks, such as cable management, knot tying, robotic kirigami, etc.,” Tong and Choi added. “We would like to expand our work to encompass more complex folding tasks, such as robotic origami. An interesting goal would be to enable a robot to fold a sheet of paper into different structures, such as paper airplanes, paper frogs, etc.”

Citation:
A method to enable robotic paper folding based on deep learning and physics simulations (2023, January 23)
retrieved 23 January 2023
from https://techxplore.com/news/2023-01-method-enable-robotic-paper-based.html

Denial of responsibility! NewsUpdate is an automatic aggregator around the global media. All the content are available free on Internet. We have just arranged it in one platform for educational purpose only. In each content, the hyperlink to the primary source is specified. All trademarks belong to their rightful owners, all materials to their authors. If you are the owner of the content and do not want us to publish your materials on our website, please contact us by email – [email protected]. The content will be deleted within 24 hours.
basedbest technology newsdeepenablefoldinglearningmethodnews update tech