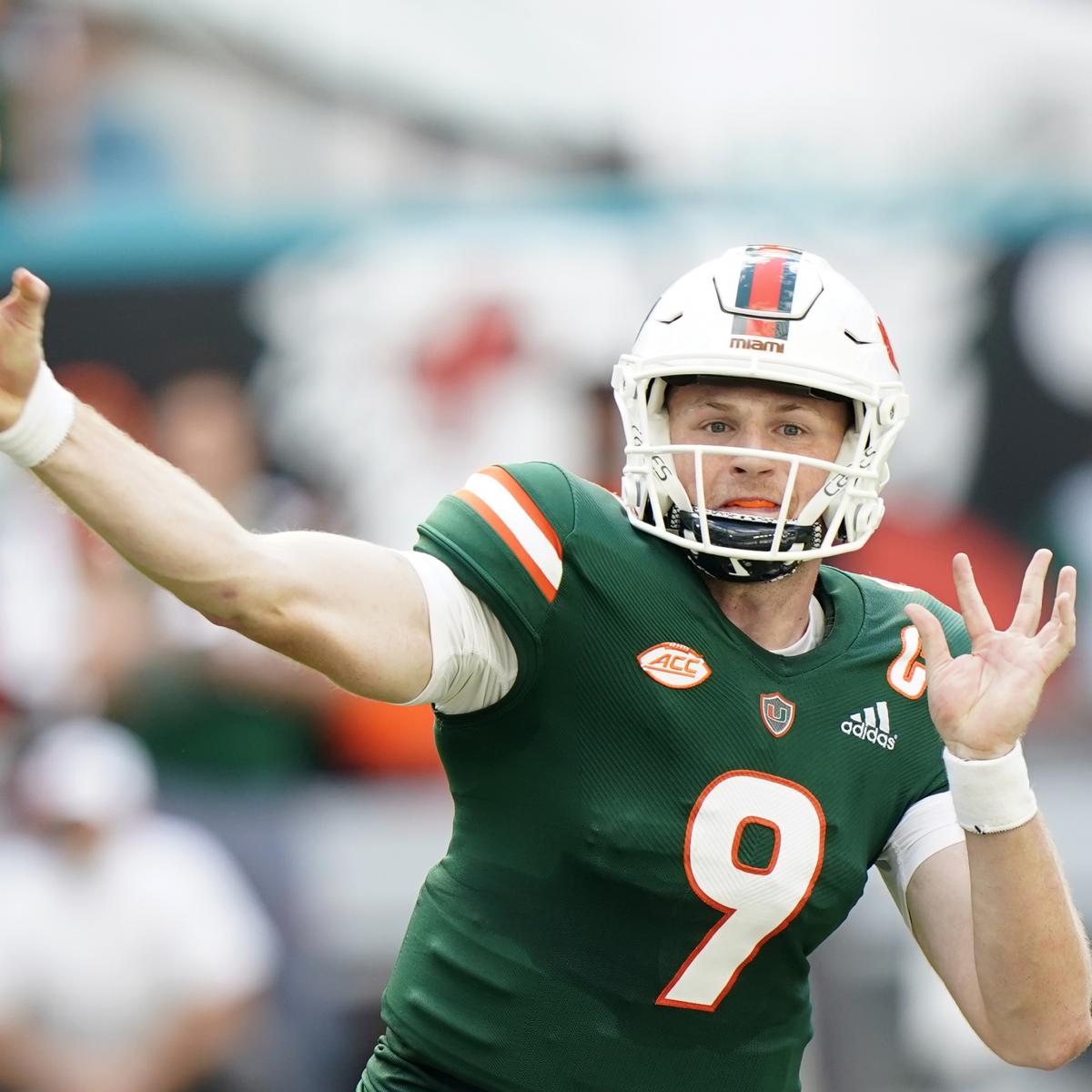 The 2022 NFL draft didn’t feature many exciting quarterback prospects. That likely won’t be the case next year.

It’s premature to make any definitive declarations about the 2023 quarterback class. This time last year, Spencer Rattler and Sam Howell were projected to go No. 1 and 2 in the 2022 draft, respectively. Fast-forward one year, and Rattler didn’t even declare for the draft, while the Washington Commanders took Howell in the fifth round.

NFL teams were largely out on this year’s quarterback class. Kenny Pickett was the only quarterback to go in the first round, and no team took a quarterback in the second round. Howell, Desmond Ridder, Malik Willis and Matt Corral could all make teams regret passing on them down the road, but they weren’t priorities on draft day.

The focus now shifts to the 2023 class. The top names on early big boards and mock drafts still have a whole season to work on their game and prove they are worthy of an early selection.

Let’s take a way-too-early look at the top quarterbacks to watch in next year’s draft class and which teams might have an eye on them based on team fit and potential need.

The jury is still out on whether Justin Fields can shatter the perception about Ohio State quarterbacks struggling in the NFL. If he doesn’t do so, then C.J. Stroud is a good candidate to break the mold, as the 6’3″, 215-pound redshirt sophomore kept the offense in Columbus humming after Fields’ departure.

An early loss to Oregon and a shaky performance against Tulsa cast some doubts early in Stroud’s first year as a starter. However, he made those concerns look foolish at the helm of one of college football’s most explosive offenses. He capped off a 4,000-yard season with 573 yards and six touchdowns in a wild Rose Bowl win over Utah.

Stroud has all the arm talent needed to be a franchise quarterback in the NFL, and he has already displayed great accuracy. The biggest question is whether he’ll be able to continue to put up video game numbers after losing wide receivers Garrett Wilson and Chris Olave to this year’s NFL draft.

Stroud does still have Jaxon Smith-Njigba, who led Ohio State with 95 receptions for 1,606 yards and nine touchdowns last season. If 5-star sophomore wideout Emeka Egbuka carves out a larger role in place of Wilson and Olave, Stroud should be just fine.

Alabama had an uncharacteristically poor offensive line last year. Although quarterback Bryce Young faced pressure on 36.2 percent of his dropbacks, per Pro Football Focus, his ability to thrive under pressure helped keep the offense afloat.

Young had a strong supporting cast, including No. 12 overall pick Jameson Williams and second-round pick John Metchie III, but throwing for 4,872 yards and 47 touchdowns with only seven interceptions is impressive regardless of the surrounding talent.

A lack of pass protection has undone many young quarterbacks in the NFL. Young showed last year that he can overcome a lack of help up front. In 2022, he’ll likely get to show give what he can do when he’s given more time in the pocket.

The only knock on Young at this point is his size. He is listed at 6’0″ and 194 pounds, but it won’t be shocking if his official measurement comes in even smaller. That will inevitably draw comparisons to smaller quarterbacks such as Drew Brees and Russell Wilson, but it’s still worth noting that those two are the exceptions to the rule.

D’Eriq King entered last season as Miami’s starting quarterback before an injury took him out of the lineup and made Tyler Van Dyke the starter. The Hurricanes didn’t look back.

Van Dyke led the ACC in big-time throws from Week 4 on, per Pro Football Focus. His size (6’4″, 224 pounds) and ability to throw the ball downfield with velocity should impress NFL scouts.

Perhaps the most promising aspect to Van Dyke is how much he improved over the season. The Hurricanes started the year 2-4, but Van Dyke led a second-half resurgence. They went 5-1 over the final six games of the season as he tossed 20 touchdowns and only three interceptions in that span.

Van Dyke is a prototypical pocket passer, so a team looking to add a dual-threat signal-caller might not be interested in him. He isn’t always the most efficient, either, as he had four games last season in which he completed less than 60 percent of his passes.

Van Dyke’s ability to throw the ball to all areas of the field and avoid turnovers should help him overcome those factors, though. If he can show that his play at the end of 2021 season was no fluke, he’s going to be a hot commodity in next year’s draft.

Kentucky is coming off a 10-win season for only the second time in the last 40 years. Junior quarterback Will Levis played a major role in that.

The quarterback has a sturdy build with the athleticism to be a factor as a runner. He had nine touchdowns on the ground to go with his 2,826 passing yards and 24 touchdowns.

Bleacher Report’s Brent Sobleski has Levis as the sixth overall pick in his way-too-early 2023 mock draft. He noted that the Kentucky signal-caller boasts “arguably the class’ best combination of size (6’3″, 232 pounds), arm talent and functional mobility.”

That should intrigue NFL talent evaluators, although Levis still must improve upon certain areas of his game.

Levis will turn 24 shortly after next year’s draft, so he’ll need to be as polished as possible. He threw 13 interceptions last season and had questionable decision-making at times, which could be a red flag for scouts.

Levis would make sense for a team that is willing to start a rookie but might not be bad enough to be picking in the top five.

As we saw with Georgia linebacker Nakobe Dean in this year’s draft, medical evaluations play a pivotal role in the evaluation process. Dean was a first-round talent who fell to the third round based on injury concerns, per Albert Breer of The MMQB.

Boston College quarterback Phil Jurkovec will need to quiet that concern in 2022 as well.

The Notre Dame transfer had a successful first season at Boston College in 2020, throwing for 2,558 yards, 17 touchdowns and only five interceptions. His ability to make plays outside of the pocket at 6’5″ and 214 pounds was impressive.

However, Jurkovec’s 2021 season was a bit of a letdown. He injured his wrist in Week 2, and it seemed to hamper him the rest of the season. He appeared in only six games and threw seven touchdowns to four interceptions while completing just 54.2 percent of his passes.

Teams in need of a developmental quarterback behind an aging veteran should keep an eye on how Jurkovec fares this season.

Efficiency. That’s the word that comes to mind when you watch Grayson McCall.

The 6’3″, 210-pound quarterback runs Coastal Carolina’s offense with brutal efficiency. In two years of starting, he has compiled 53 touchdown passes to only six interceptions while completing 70.9 percent of his passes.

McCall’s efficiency is aided by the Chanticleers’ offense, which relies heavily on a strong running game and play action. He’s often throwing to his first read, which happens to be open more often than not.

The junior quarterback’s toughness and work as a runner will make fans in NFL front offices as well. He piled up 859 rushing yards and 11 touchdowns over the past two seasons.

However, it’s fair to question McCall’s arm strength. He doesn’t make a ton of tight-window throws, and a lot of his deep balls are of the high-arcing variety.

Unless McCall can put more NFL-type throws on film, he’s likely a developmental prospect. Teams with a veteran whom he could sit behind while he works on his mechanics should be in on him.

Most of the players featured here are already established starting quarterbacks. However, we’ve recently seen quarterbacks go from backups to top prospects in only one season.

Florida’s Anthony Richardson is a good candidate for that kind of sudden rise this year. He played in only eight games because a knee injury and backed up Emory Jones last season.

As far as physical traits go, it doesn’t get much better than Richardson, who has a Cam Newton-esque frame at 6’4″ and 237 pounds. He also has the arm strength to drive the ball on off-platform throws.

However, Richardson also threw five interceptions to six touchdowns on only 64 passing attempts last year. He’s going to have to prove that he can run an offense.

His teammates appear to have confidence in his ability to do so.

“I just love how calm he is in really any situation, even during scrimmage,” Florida receiver Justin Shorter said, per Zach Goodall of All Gators. “We’ll be backed up in that position they put us in, and he’s calm, he knows what he’s doing, he’s telling people where to go, making the right checks, right reads, and I just really see him putting the time in and that work in to be that guy.”

If Richardson lives up to the hype, he’ll likely be a first-rounder. For now, he falls into the more-tools-than-polish category and would need strong support to reach his potential.

At one point, Spencer Rattler seemed like a future No. 1 overall pick. The 5-star recruit  threw for 3,031 yards, 28 touchdowns and seven interceptions during his first season as a starter at Oklahoma in 2020, guiding the Sooners to a 9-2 record.

However, the wheels came off for Rattler in 2021. Caleb Williams replaced him under center after a stretch of poor performances, and he never got the starting job back.

Now, Rattler will get a fresh start at South Carolina and a chance to show NFL teams he is still a top-tier prospect.

Rattler has a lightning-quick release and the ability to make big-time throws outside of the pocket. In 2022, he has to show leadership ability and a command of a new offense. His ceiling is still high, but if he doesn’t have a breakout season in South Carolina, his draft stock could plummet.

Rattler’s best fits at this point will be with offenses that will allow him to roll out or make plays outside of structure. A strong offensive coaching staff that can help him with decision-making and managing the offense would help, too.

Denial of responsibility! NewsUpdate is an automatic aggregator around the global media. All the content are available free on Internet. We have just arranged it in one platform for educational purpose only. In each content, the hyperlink to the primary source is specified. All trademarks belong to their rightful owners, all materials to their authors. If you are the owner of the content and do not want us to publish your materials on our website, please contact us by email – [email protected]. The content will be deleted within 24 hours.
best sports newsclassDraftnews update sportsnewsupdateNFLpotentialsports news

Thomas Cup: All the players have gone crazy, slept with…

Explained: Heatwave, its signs, symptoms and measures for…

Dodgers vs. Arizona Diamondbacks: How to watch, stream and…

Three Google features Apple should borrow for its next big…