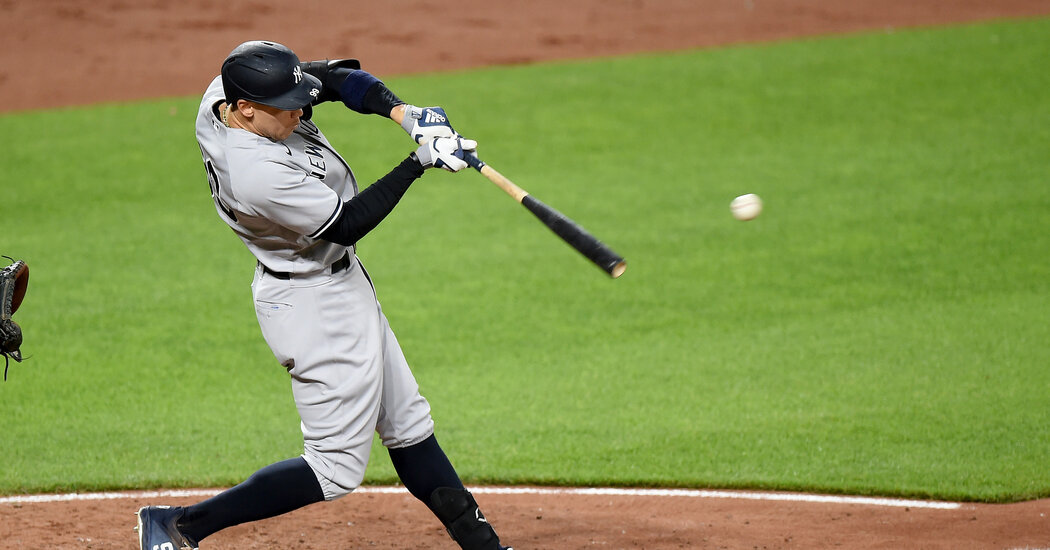 BALTIMORE — Aaron Judge homered for the third time in two games, Domingo German had another stellar outing at Camden Yards and the Yankees beat the Baltimore Orioles, 8-2, on Saturday night.

After hitting two home runs Friday, Judge provided the Yankees a 5-0 lead with a two-run shot in the second. Six of Judge’s 11 homers this season have come against Baltimore.

“We had some good at-bats there to kind of get us going,” Yankees Manager Aaron Boone said. “We were able to throw a couple of crooked numbers up there and then able to add later was definitely nice.”

German (3-2) allowed one run and four hits with six strikeouts and two walks over six innings. He has won all four of his career starts in Baltimore.

“It feels great to have that kind of support behind you,” German said through an interpreter. “When that happens in the game, you want to stay aggressive. You don’t want to lower the intensity. You want to go out there and execute pitches.

Tyler Wade had three hits while batting ninth for the Yankees, who improved to 4-1 on its 10-game road trip and has won 11 of its last 14 games overall.

The Yankees took a 3-0 lead in the first on a passed ball by catcher Chance Sisco and a two-run single by Gary Sanchez off Jorge Lopez (1-4).

Judge increased the margin with the two-run homer in the second. He has hit 23 home runs in 59 career games against Baltimore.

“Any win is great, especially at a time like this when we were able to get a bigger lead,” Judge said. “It gives us a chance to get some guys off their feet.

Yandy Diaz, who had two of Tampa Bay’s eight doubles, and Randy Arozarena each had three hits.

Francisco Lindor, Pete Alonso and Jose Peraza each homered for the Mets, who have lost two in a row at Tropicana Field after a seven-game winning streak.

Wendle had an infield single that set up a run in the first and doubled to spark a five-run fourth that made it 6-4. He hit a two-run double in a six-run eighth that broke open the game.

“The law of averages,” explained Wendle, who has been slumping with the rest of the Rays. “We’ve talked about it being a long season, and these things happen — things will turn around at some point. We’re not going to hit .100 all season. I think it was something that was bound to happen eventually.”

Rays starter Shane McClanahan (1-0) got his first major league win. The 24-year-old lefty, who last October became the first pitcher in major league history to debut in the postseason, gave up four runs on six hits while striking out seven in five and a third innings.

Peraza’s three-run homer, his first of the season, put the Mets up by 3-1 in the second. Alonso made it 4-1 in the third with his sixth homer of the season and first in 16 games.

Willy Adames hit a two-run double in the fourth off Joey Lucchesi (1-3). Pinch-hitter Austin Meadows drove in the final run of the inning with a double off Sean Reid-Foley.

Lucchesi (1-3) gave up four runs in one and two-third innings following Drew Smith, who worked two innings in his first major league start. Smith gave up one unearned run on two hits while striking out three.

“I’ve just got to keep trusting myself,” Lucchesi said. “I know I’m really good, but I’m not showing it right now. I know there are haters out there, but whatever, I’m just going to man up and do the best I can the next time out.”

“He didn’t throw his curves enough for strikes,” Mets Manager Luis Rojas said. “He’s had a few outings where he’s been good and a few where he’s been exposed because of his two-pitch repertoire. If one of his pitches isn’t working he can get exposed. That’s what happened in that big inning.”

The Rays collected 15 hits after coming into the game with a .219 batting average.

Denial of responsibility! NewsUpdate is an automatic aggregator around the global media. All the content are available free on Internet. We have just arranged it in one platform for educational purpose only. In each content, the hyperlink to the primary source is specified. All trademarks belong to their rightful owners, all materials to their authors. If you are the owner of the content and do not want us to publish your materials on our website, please contact us by email – [email protected]. The content will be deleted within 24 hours.
AaronBaltimorebest sports newscontinuesJudgesMasterynews update sportsnewsupdate