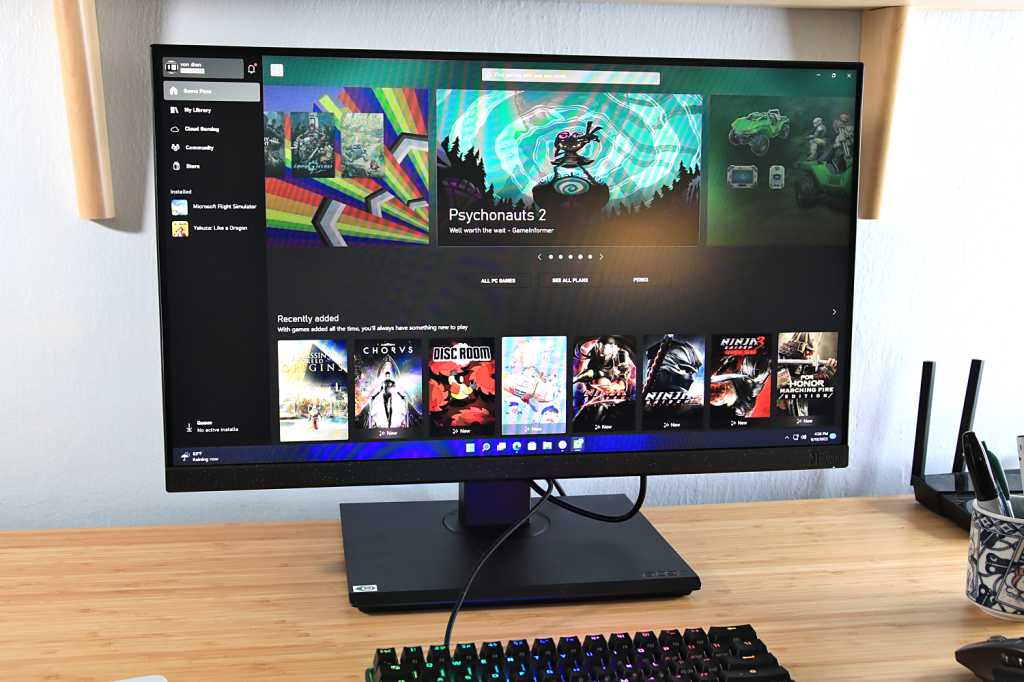 Acer Vero BR277 review: An eco-friendly monitor on a budget

The Acer Vero BR277 tries to distinguish itself from the pack of other 27-inch budget monitors but ultimately falls short. It has the silver lining of being built from recycled plastics, making it great for the eco-warrior, but otherwise, it’s a rather mundane display.

The use of plastics and rare earth materials combined with energy-intensive production and distribution practices make even the most basic monitors less than eco-friendly. Acer’s Vero BR277 tries to improve on this profile with recycled materials and durable design. But does that have to mean sacrificing quality?

The Acer Vero BR277’s specifications are typical of a budget 27-inch monitor, but a few items stand out. This monitor has a VGA port, which is useful for connecting legacy devices. It also has a refresh rate of 75Hz, which is a slight improvement over the standard 60Hz, and it supports adaptive sync for better gaming performance.

Of course, the Vero BR277’s most distinctive trait doesn’t show up in the specification sheet. The monitor is built from at least 50 percent recycled consumer material, is shipped in 100 percent recyclable packaging, and carries EPEAT Silver certification. It’s also energy efficient–though, to be fair, that’s true of most monitors.

Shoppers should note that the Vero BR277 has a smaller 24-inch sibling, the Vero BR247. It’s $50 less expensive and offers identical features, though its image quality may vary from the 27-inch model reviewed here.

You wouldn’t know the Acer Vero BR277 is partially built from recycled material at a glance. A simple matte-black frame and thin bezels help the monitor blend in with its surroundings. Close inspection reveals some mixed flecks of material, but I suspect this is a design choice, not a result of how it’s produced.

In any case, the Vero BR277 isn’t much to look at. Competitors like Dell and LG provide more attractive monitors at a similar price.

This is good to see in a monitor with sustainable design. The production of a new monitor represents the bulk of its lifetime impact on the environment, so it’s best to keep a monitor as long as possible if sustainability is on your radar. The Vero BR277 feels ready for the long haul.

The monitor ships with a stand that adjusts for height, tilt, and swivel. It’s sturdy and has a flat, square base. The stand’s footprint is a tad larger than many other 27-inch monitors, including most models from Asus, Dell, and LG, but not by much. A 100x100mm VESA mount is available for attaching a third-party monitor stand or arm.

The Acer Vero BR277 has an HDMI and DisplayPort input, plus VGA for connecting older devices. The inclusion of VGA hints at the monitor’s more business-minded design–this monitor may find itself connected to very old computers. This range of inputs is fine for the price but not exceptional.

A simple menu provides a handful of options. It’s easy to navigate thanks to a joystick and physical buttons on the monitor’s right flank. I noticed the menu was unusually quick and responsive, which is nice when making large adjustments to brightness or contrast.

Though bare-bones, the menus do include three precise gamma presets and a few color temperature modes. There’s also an sRGB mode and a custom color mode for further calibration.

There are a couple gaming features, as well. The monitor has a switchable Overdrive mode for faster response times, adaptive sync, and even supports a refresh rate number to help users judge if adaptive sync is working as it should. These features are appreciated.

A pair of 2-watt speakers are included. Their maximum volume is low, however, so they’re only suited for use in a quiet room. Most people will want to connect external speakers or headphones.

The Acer Vero BR277 is an inexpensive monitor more focused on sustainability than image quality. This has consequences for its performance, but it nails several fundamentals that provide an enjoyable, if not vivid, experience.

Still, this level of brightness, combined with the monitor’s anti-glare coat, is more than enough for day-to-day use. I used the monitor at its default setting of just 40 percent of maximum and found it plenty bright for use in my modestly lit office.

The contrast ratio comes in at a very respectable maximum of 1160:1. This is about the upper limit of a conventional LCD monitor with an IPS display panel. Some monitors that cost several times more than the Vero BR277 perform no better–or much worse.

A decent contrast ratio helps the monitor achieve depth and dimensionality, which is helpful in movies, streaming shows, photos, and games. The dreaded IPS glow, a hazy cast found in dark scenes, is visible on this monitor but less distracting than on many budget alternatives.

Color gamut comes in weak at just 97 percent of sRGB and 77 percent of DCI-P3. As the graph shows, this is a long way from what the best monitors can achieve, and it means the Vero BR277 can’t display colors that more-capable monitors can handle.

This leads to a less vivid and saturated look that many owners will find underwhelming. It also makes the Vero BR277 a lackluster choice for amateur or professional content creators in need of an entry-level monitor.

While the Vero BR277’s color gamut is narrow, the colors it can display are reasonably accurate. Photos, movies, and streaming shows look realistic. Color temperature came in at 6600K, which is hardly off the target of 6500K. This adds to the monitor’s grounded presentation.

I noticed the gamma target was off my preference, landing at a reading of 1.9 instead of 2.2. This means the image can appear brighter than it should. I was able to mostly fix this by setting the monitor’s menu to a gamma of 2.4, which was closer to my target of 2.2.

Sharpness is a problem. This is a 27-inch monitor with 1,920 x 1,080 resolution, which works out to a pixel density of just 81 pixels per inch – roughly half what a 4K monitor of the same size can achieve. Small fonts can look blocky, streaming content looks soft, and fine details in games appear to shimmer in motion.

On the whole, the Vero BR277’s image quality is solid but limited by its budget pricing and focus on productivity over entertainment. The monitor looks realistic, provides a sense of depth, and achieves some detail in dark scenes, but it can seem dull next to better displays.

The Acer Vero BR277 doesn’t strongly advertise gaming-friendly features, but they exist. The monitor supports adaptive sync and, in my testing, was able to work with Nvidia G-Sync on a GTX 1080 Ti graphics card. This allows smooth frame pacing in games and stops unsightly screen tearing.

Refresh rate maxes out at 75Hz. This is a minor bump over 60Hz, but I can’t claim to see the difference. Many gaming monitors in the Vero BR277’s price bracket can achieve a much higher refresh rate of 144Hz.

Motion clarity is typical for an LCD monitor with an IPS panel. Fast-moving objects are easily identifiable but show significant loss of detail. Fast camera pans in a game create obvious motion blur.

An Overdrive mode is included to increase pixel response times. This provides a bit more clarity in fast-moving details but leads to overshoot, an issue caused by pixels overcompensating in their attempt to change quickly. This creates strange halos and fringing around objects. I recommend leaving the Overdrive feature off.

Acer’s Vero BR277 is a good monitor built from recyclable materials but otherwise lacks a standout feature to separate it from the pack. The monitor’s image quality is good, but not great. Many alternatives offer a higher refresh rate or improved resolution at a similar price.

Ultimately, the Vero BR277 is a monitor you’ll purchase on the promise of sustainability. The good news is that choosing this monitor doesn’t stick you with a bad display. It’s a fine performer likely to last as long as you choose to keep it.

Denial of responsibility! NewsUpdate is an automatic aggregator around the global media. All the content are available free on Internet. We have just arranged it in one platform for educational purpose only. In each content, the hyperlink to the primary source is specified. All trademarks belong to their rightful owners, all materials to their authors. If you are the owner of the content and do not want us to publish your materials on our website, please contact us by email – [email protected]. The content will be deleted within 24 hours.
Acerbest technology newsBR277budgetecofriendlymonitornews update technewsupdate

‘Redfall’ will still emphasise “the solo experience” despite co-op features

It’s Supernatural vs. Once You Go Black