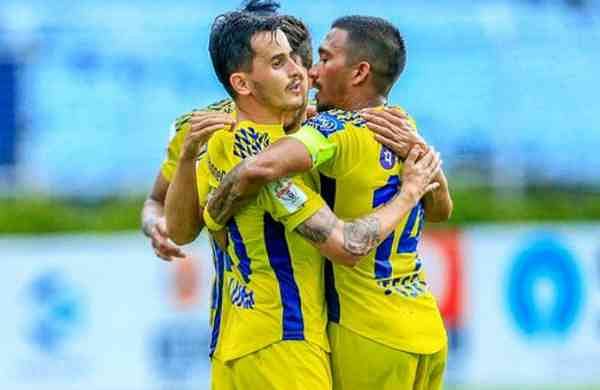 Scores remained level at half-time and given how wasteful both teams were on either half, it seemed that the game was heading for its first goalless draw.

The Navy team did an incredible job in their opening game when they came back from a goal down to win against Delhi FC and had they only tucked away from the biggest chance they had on Saturday in the 73rd minute, the Sailormen could have ensured passage to the quarter-finals already.

The opportunity was textbook and it sprung out of a Navy counterattack. Ultimately, it was squandered, not once but twice. First, Sreyas VG had to put his shot away with only Albino Gomes to beat, but the Blasters custodian palmed it away.

Only for the ricochet to fall straight at the feet of Britto PM, who had an open goal to aim for. The former East Bengal winger, however, astonishingly shot wide.

The breakthrough goal had arrived two minutes earlier, following an erratic challenge inside the box by Navy’s Dalraj Singh, which was adjudged to be a yellow card and a penalty was awarded in favour of Kerala.

Adrian Luna stepped up for the responsibility and made no mistake in making it 1-0 for his side.

“We are happy with the three points. It was our idea of today’s game. It was really hard in these circumstances with the rain and the condition of the pitch. We wanted to finish the game without injuries but now we have to see how to recover some of our players”, said Kerala Blasters head coach Ivan Vukomanovic after the game.

Denial of responsibility! NewsUpdate is an automatic aggregator around the global media. All the content are available free on Internet. We have just arranged it in one platform for educational purpose only. In each content, the hyperlink to the primary source is specified. All trademarks belong to their rightful owners, all materials to their authors. If you are the owner of the content and do not want us to publish your materials on our website, please contact us by email – [email protected]. The content will be deleted within 24 hours.
Loading...
adrianAdrian Lunabest sports newsBlastersCupdebutDurandDurand Cup