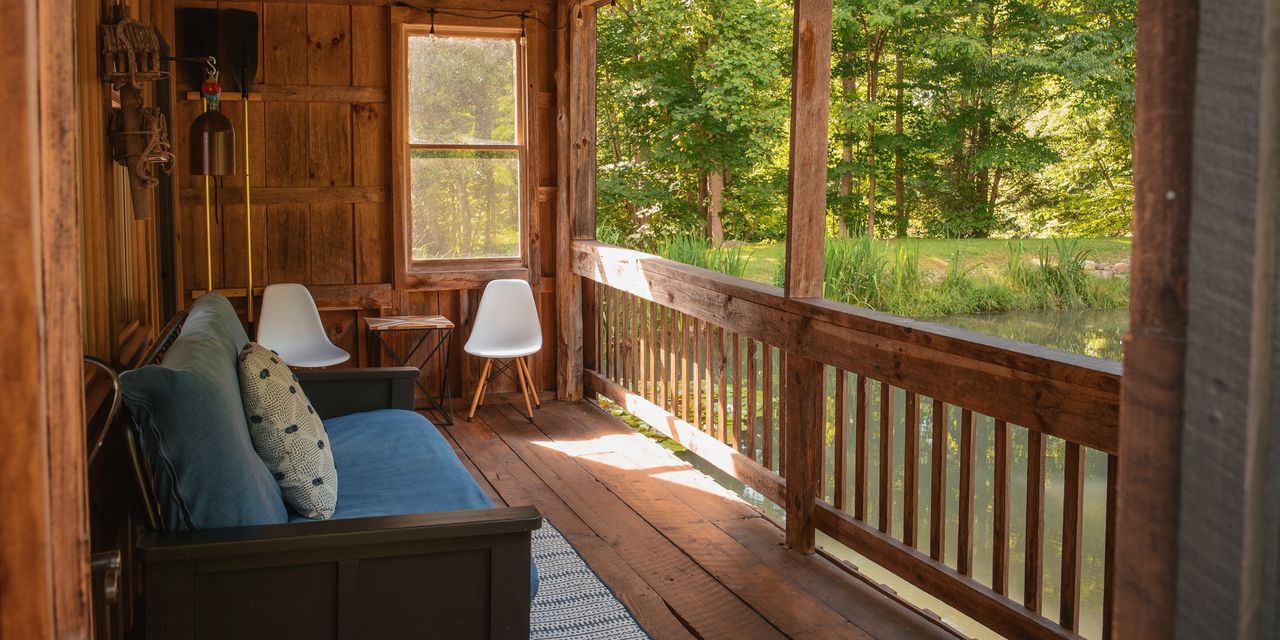 said it expects to post its first full-year net profit this year after its revenue climbed 70% last quarter as people continued to book suburban rentals despite hosts raising prices.

Revenue was helped by customers booking a record number of nights and so-called experiences during the quarter and hosts raising nightly rates because of inflation. Airbnb’s gross bookings—the value of bookings made on its platform—grew 67% to $17.2 billion, a record.

The company said it expects second-quarter revenue to be between $2.03 billion and $2.13 billion, higher than Wall Street’s average estimate of $1.97 billion. Airbnb said early bookings show strong demand for the summer. By the end of April, the company said it had over 30% more nights booked for summer travel than the same period in 2019.

It said that future demand could be affected by “additional Covid outbreaks, any impact to travel from the conflict in Ukraine, and consumer price sensitivity.”

After the company announced results, its shares rose more than 5% in after-hours trading.

Like many Silicon Valley upstarts, Airbnb hasn’t posted an annual profit since its founding, in 2008. Chief Financial Officer

told analysts Tuesday that the company expects to post its first full-year net profit this year.

Airbnb’s loss narrowed to $19 million in the first quarter from $1.17 billion in the year-earlier quarter, when its bottom line was hurt by costs tied to the debt it took to ride out the pandemic, among other things. Its first-quarter loss was smaller than the $179 million analysts had projected.

The pandemic reshaped Airbnb’s business. Local travel became its stronghold and people started using the platform for longer stays. Stays of 28 days or more made up 21% of bookings in the first quarter, down from 24% in the same period a year earlier but above prepandemic levels.

Many large employers have said they would allow their employees to live more nomadic lives even after things return to normal. Airbnb is betting it can gain from that trend. Last week, the company tried to lead the way by allowing its employees to work from just about anywhere, including overseas, without a pay cut.

Airbnb’s home-rental business was initially crushed by the health crisis. The company paused noncore projects, cut a quarter of staff and slashed the company’s hefty marketing budget. But the growing acceptance of remote work and the need to travel places beyond crowded city centers eventually made the company a pandemic winner.

Its rebound made it one of the hottest public listings of 2020. Though Airbnb shares have lost more than 15% this year, the company’s market capitalization still exceeds that of Marriott International Inc. and Hyatt Hotels Corp. combined.

will return as corporate travel picks up. Airbnb’s rental inventory has largely stayed flat during the pandemic and adding more listings is key to growth, said

Airbnb is jostling for new hosts, alongside Expedia’s Vrbo, to meet soaring demand for local stays. Last year, it eased the sign-up process for new hosts, reducing the number of steps required to 10 from dozens.

said in an interview last week, so the company can grow by filling existing homes even if it doesn’t dramatically increase supply.

Last year, it introduced a flexible search feature that suggests trips for people who don’t know where and when they want to travel, allowing the company to steer them to locations where Airbnb has supply. The company said Tuesday it plans to further upgrade its search feature later this month.

Airbnb’s rapid growth—and newfound success with local travel—has drawn opposition from some. Homeowners from Arizona to Florida and Massachusetts are among those raising objections to short-term rentals because they claim they can lead to noise, crime and falling property values.

Last month, a shooting at a party at a Pittsburgh Airbnb property killed two young men and wounded eight others.

The company doesn’t own or manage its listed properties, making it harder to police them. It says the incident rates have improved over the years and it has been trying to reduce them further by doing things like blocking one or two-night stays on New Year’s Eve and Halloween for guests without a history of positive reviews.

During the quarter, hosts in parts of war-ravaged Ukraine started getting a surge in bookings from guests who didn’t intend to show up and were using Airbnb as a way to send them money in support. More than 600,000 nights were booked in Ukraine in the first quarter, worth $20 million, the company said.

How the Biggest Companies Are Performing

Denial of responsibility! NewsUpdate is an automatic aggregator around the global media. All the content are available free on Internet. We have just arranged it in one platform for educational purpose only. In each content, the hyperlink to the primary source is specified. All trademarks belong to their rightful owners, all materials to their authors. If you are the owner of the content and do not want us to publish your materials on our website, please contact us by email – [email protected]. The content will be deleted within 24 hours.
ABNBAgricultural MachineryAirbnbAirbnb Cl AartsBarsbest technology newsBKNG

Djokovic stays perfect against Monfils, Raducanu knocked out in Madrid