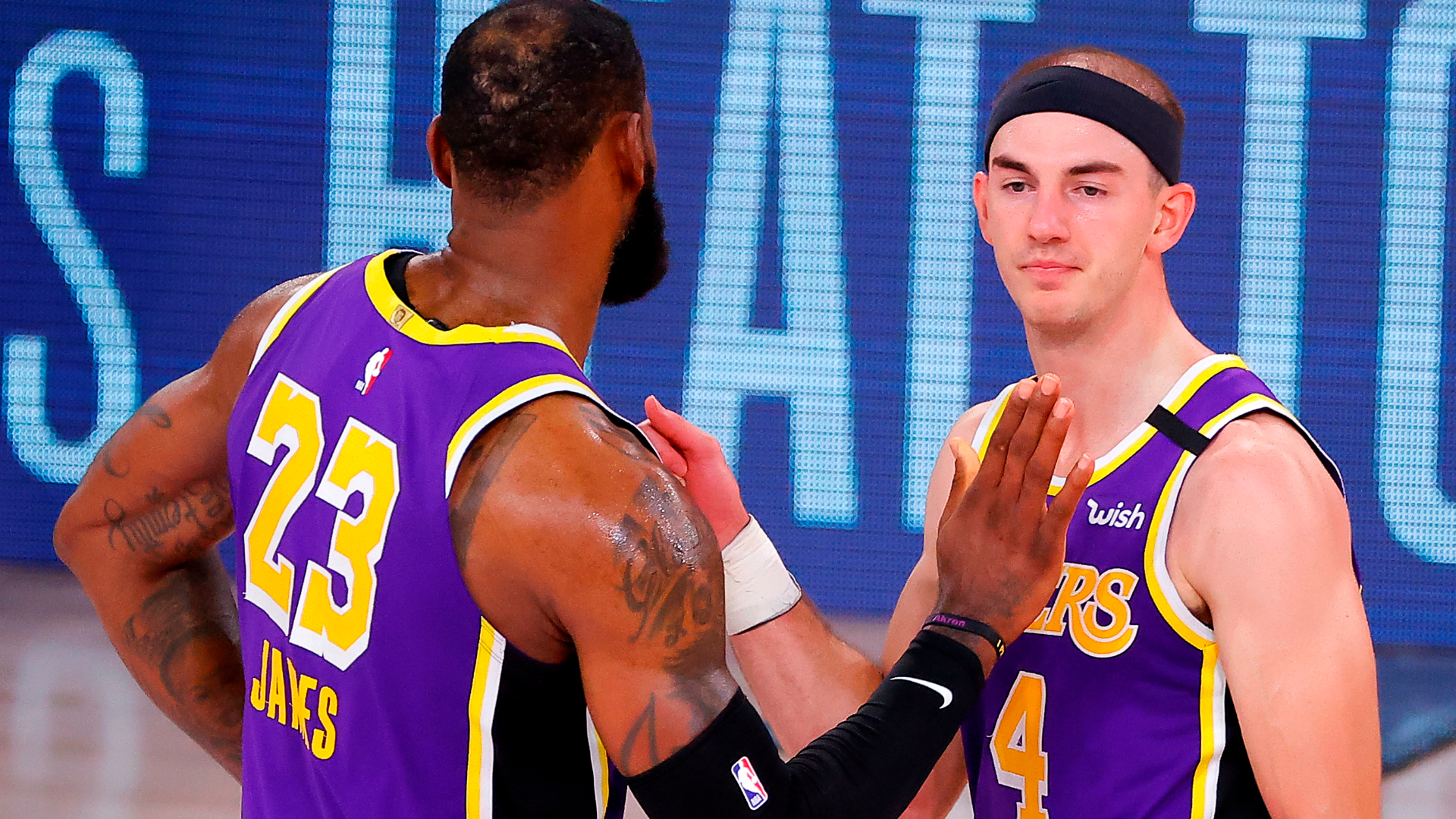 Alex Caruso fit perfectly with LeBron James, so why didn’t the Lakers keep him?

LeBron James has had some extraordinary teammates over his illustrious 19-year career, with a string of Hall of Famers suiting up alongside The King.

From Kyrie Irving and Kevin Love in Cleveland to Dwyane Wade and Chris Bosh in Miami and now Anthony Davis in Los Angeles — LeBron has experienced championship success at each stop, forming devastating combinations with each set of teammates.

However, in Los Angeles, he formed one of the most impossible to guard 1-2 punches with another teammate. Alex Caruso.

The undrafted guard out of Texas A&M worked his way into the league via the G League and earned his stripes as a scrappy, dynamic bench player, giving the Lakers a defensive burst of energy with their second unit, not to mention the highlight-reel dunks. It was his ability to not only play alongside LeBron, but thrive, that made him an indispensable part of their 2020 championship run.

Last season, the Wall Street Journal dubbed him the LeBron James at playing with LeBron James, analysing hundreds of pairings of teammates with no combination alongside LeBron producing a better net rating than Caruso.

Caruso’s high IQ on the offensive end, elite off-the-ball movement, savvy defensive instincts and career 37.5 percent clip from the 3-point line created chaos in partnership with LeBron and is exactly the type of role player he needs.

After four seasons in Los Angeles, the time came this past summer for Caruso to get paid, with his first taste of free agency. Given the Lakers’ past success and his key role in that, it was safe to assume that he would be back in purple and gold for the 2021-22 season, but now he finds himself wearing the red and white in Chicago. So that begs the question….

Why didn’t he re-sign with the Lakers?

Caruso made it clear that his desire was to stay put in LA and the fan favourite recently revealed on JJ Redick’s Old Man and the Three podcast that while he wanted to come back, the organisation simply didn’t offer him a contract that met his market value, although he was even willing to take a discount.

“So going into it I really didn’t know what to expect, and I really didn’t hear much from any team including the Lakers leading up to 6 p.m., and then they called and the Lakers made their offer, and it wasn’t an offer I was gonna accept because I was gonna get considerably more money from another team,” he said.

“Like we just said, a guy who hasn’t had a lot of decision-making power, fought for a job, essentially 30 teams told me they didn’t think I was good enough to play in the NBA for two or three years. I need to get as much money, this is real life we’re talking about. I need financial security for me, for my people.”

ESPN’s Ramona Shelburne reported that the Lakers were only willing to pay Caruso $7 million per year and he confirmed as much on the podcast that the deal was for two years and $15 million.

Coming from the G League and in search of his first big payday, Caruso had many suitors in free agency and eventually signed with the Chicago Bulls for four years and $37 million.

How did he end up signing with the Bulls?

Chicago had a busy free agency period in the off-season bringing in DeMar DeRozan and Lonzo Ball, via sign-and-trade, with the latter’s arrival initially making Caruso think that a deal would be off the table, but as he explains…

“I got on the phone with AK [Arturas Karnisovas] and with Billy [Donovan], and the way they were talking about how they wanted to play, how they saw me as a player, I thought they hit the nail on the head,” Caruso said.

Will the Lakers regret not bringing him back?

Through the first few weeks of the season, Caruso has been a hit in Chicago, helping propel them to the fifth-best defense in the league and an 8-6 record, while the Lakers have struggled out of the gate on both sides of the ball, allowing 111.9 points per game, which ranks 28th in the NBA.

The 27-year-old has assumed more responsibility in Chicago as the leader of their second unit and is giving the Bulls everything he gave the Lakers and more, currently sitting third in the NBA in steals (2.5 per game), despite only playing 28.1 minutes per game — the lowest mark among those in the top 5.

The Lakers’ slow start to the season can be attributed to many factors, with chemistry hard to come by with 11 new faces on the roster, plus the absence of LeBron James, who is currently sidelined with an abdominal injury, missing the past six games.

Given the sheer talent on their roster in Russell Westbrook, Anthony Davis, Carmelo Anthony and co. alongside James, the Lakers will surely figure it out, but for now, all they can do is watch as Caruso helps take the Bulls to the top tier of the Eastern Conference.

Denial of responsibility! NewsUpdate is an automatic aggregator around the global media. All the content are available free on Internet. We have just arranged it in one platform for educational purpose only. In each content, the hyperlink to the primary source is specified. All trademarks belong to their rightful owners, all materials to their authors. If you are the owner of the content and do not want us to publish your materials on our website, please contact us by email – [email protected]supdate.uk. The content will be deleted within 24 hours.
Alexbest sports newsCarusodidntFITJamesLakersLeBron

1994 champion 49ers, loaded with free agents, explain how Rams can win it all

Bundesliga: Haaland scores on return to keep Dortmund on…