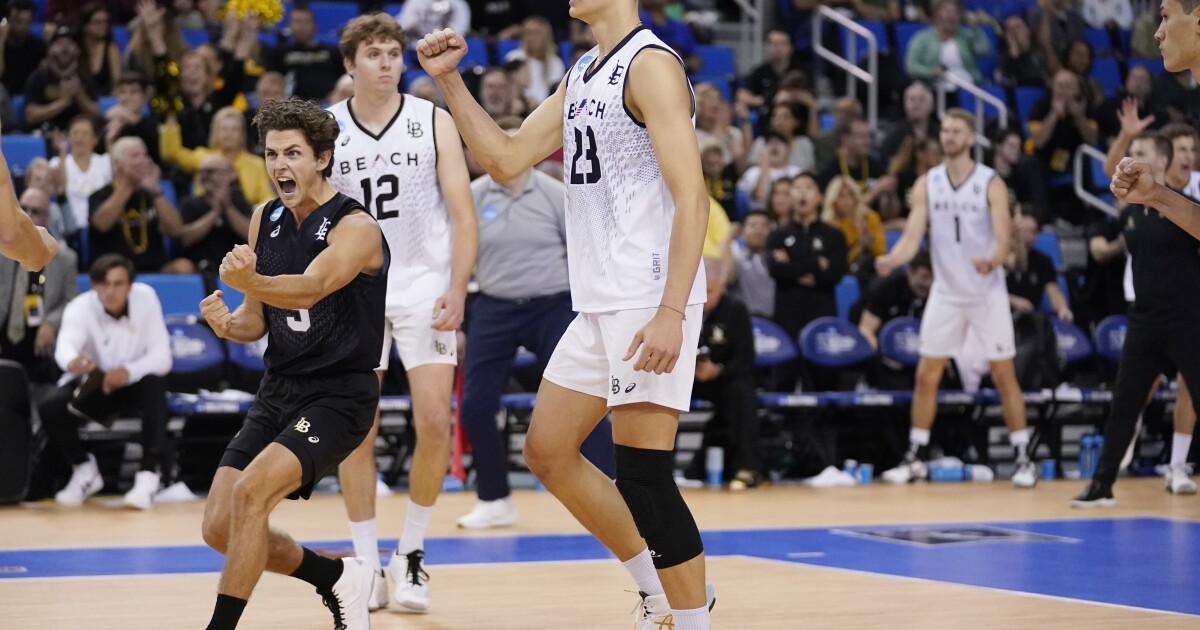 Just the mention of Alex Nikolov’s name made UCLA coach John Speraw raise his eyebrows and shake his head. Sitting in his office during UCLA’s week off before the NCAA tournament, Speraw called Long Beach State’s 6-foot-8 freshman phenom “the best kid in the country.”

Simon Torwie sealed the victory with an ace, one of his four on the night, to send Long Beach to the championship game at 5 p.m. on Saturday against Hawaii or Ball State. Beach has now won nine of the past 11 matches against UCLA (22-5) and is one win away from its third NCAA title in five years.

Nikolov is the first freshman to win the nation’s top individual honor. Freshmen, even the top prospects, often struggle with the physicality of college volleyball. Serves at the junior level come in at roughly 50 mph, Long Beach coach Alan Knipe said last week. In college, players rocket the ball at 70 mph.

Nikolov’s serve is already one of his best weapons: With 58 aces on the year, including one Thursday, he’s already set a freshman record at Long Beach State. He is only two away from tying the school’s single-season ace record.

“Junior volleyball players, when they become freshmen in college, it’s not that they can’t play volleyball with us,” Knipe said last week. “They generally can’t play with us long enough throughout the week, throughout the season and they just break down. The difference for Alex is that physically, he can handle the game.”

Nikolov is the son of two former professional volleyball players. His father Vladimir is a Bulgarian volleyball legend and captained the national team to a fourth-place finish in the 2012 London Olympics. Nikolov recalled watching his father play in front of 15,000-person crowds.

Although the rocking crowd in Pauley Pavilion didn’t approach the size of those that his father entertained, energy was pulsing through the arena as UCLA jumped ahead to a two-set lead behind stellar serving. Long Beach State, which had no service aces in the first two sets compared to UCLA’s six, found momentum with two straight kills from Nikolov to open the third set and an ace from Torwie.

“From a volleyball perspective, I felt like we were right there,” Speraw said.

“It’s just the serving; they just got going.”

Feeding off fans seated behind its bench and students packed into the bleachers on the opposite court, Long Beach stole momentum in the third and fourth sets. Whenever in need of a point, Nikolov delivered from the outside or the back row. After he hammered down kills, the freshman raised his fists and screamed toward the crowd.

“This is what every athlete dreams for,” he said of the crowd. “I love it.”

Growing up in Bulgaria, a country with a population smaller than L.A. County, Nikolov recalled playing junior matches in front of mostly empty arenas. Instead of learning how to work a crowd, his youth training provided him a head start in other areas.

The influx of foreign players, the improved technology that makes it easier for coaches to scout top international prospects and growth of boys’ volleyball domestically has only contributed to parity at the college level.

The Bruins were once kings in the sport under legendary coach Al Scates, who led the program to 19 NCAA titles.

Since the NCAA adopted the sport in 1970, UCLA never went more than four years without a national title until 2006. The program’s current drought served as motivation for players entering the NCAA tournament in their home gym off their best season of Speraw’s 10-year tenure, but the coach was quick to remind them of the changing times.

“These players probably want to represent that history but it’s also their time and I think our alumni understand that this is their time,” Speraw said this week. “Their time is different and it’s challenging and it’s hard and we’re going to keep knocking on the door.”

Despite nearly breaking through, the door stayed locked for the Bruins on Thursday.

UCLA and Long Beach State face off for a spot in the NCAA championship. Bruins would end a drought, while Beach would extend a mini-dynasty.

Denial of responsibility! NewsUpdate is an automatic aggregator around the global media. All the content are available free on Internet. We have just arranged it in one platform for educational purpose only. In each content, the hyperlink to the primary source is specified. All trademarks belong to their rightful owners, all materials to their authors. If you are the owner of the content and do not want us to publish your materials on our website, please contact us by email – [email protected]. The content will be deleted within 24 hours.
advanceAlexBeachbest sports newsChampionshipleadslongNCAA