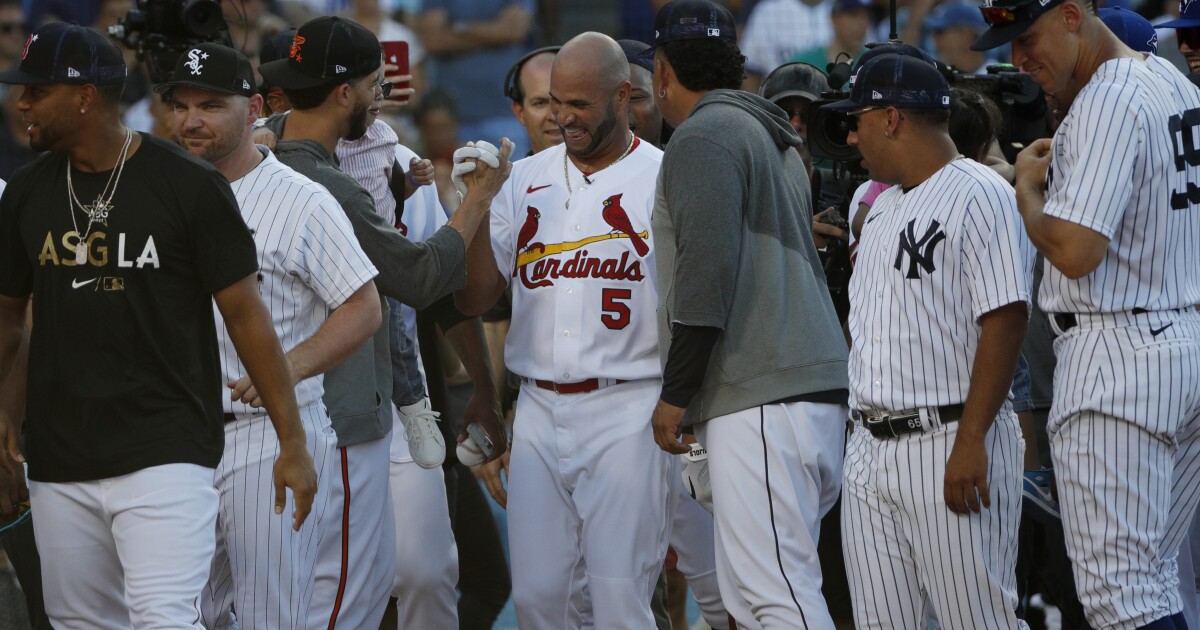 When Albert Pujols stepped to the batter’s box in the first round of the home run derby on Monday and in his only at-bat in the All-Star Game on Tuesday, he did so under the backdrop of a standing ovation from the Dodger Stadium crowd.

The fans were paying tribute to Pujols’ greatness. The designated hitter and first baseman for the St. Louis Cardinals has 685 home runs, 3,333 hits, 1,889 runs scored and 2,170 RBIs in a career that will end after this season. The 42-year-old — the 2001 National League rookie of the year, 11-time All-Star, three-time MVP, six-time Silver Slugger winner, two-time Gold Glove Award winner and two-time World Series champion — is a lock for the Hall of Fame.

It’s been a career that Pujols said he’s been blessed to have. For many in baseball, he’s meant so much more than his numbers.

“He will forever have a legacy in this game,” said Dodgers manager Dave Roberts, a friend of Pujols and his manager last season when he played 85 games for Los Angeles. “One part of it obviously is the back of his baseball card … but I think the more important part is, being from the Dominican Republic and setting a standard for Latin players, that they can thrive in this game on and off the field.”

Said Dodgers pitcher Julio Urías: “He’s the player that influenced me the most. His behavior every day, he shows you how to be a professional, how to control yourself in some aspects that you can’t control.”

Added Angels outfielder Mike Trout, who spent 10 years playing alongside Pujols after Pujols left the Cardinals following the 2011 season: “It means a lot to baseball, you know, what he’s done for the game.”

What happened when Pujols took his break before his final 30 seconds of round one in the home run derby gave a clearer, albeit brief, picture of what his impact on baseball has been.

Instead of just his usual friends coming out to talk to him through the break, the entire roster of All-Stars seated by both dugouts got up to greet Pujols. It wasn’t planned. It was just a feeling all the players had to pay their respects to a man invited to the All-Star Game under the Commissioner’s Legends Selection.

“It was pretty emotional,” Pujols said of the moment. “I tried to hide it because I still, as an athlete, need to go out there and compete, but it’s probably gonna be one of the top moments in my career, to tell you the truth, because it’s just pretty special.”

Pujols won’t leave the game as just one of the best to ever play it. He is an icon who, off the field, knows he’s been and will continue to be a mentor for other players from Dominican Republic and elsewhere; whose not-for-profit, the Pujols Family Foundation, has for years served the Down syndrome community and those impoverished in his home country.

Many players in the early months of the season called for a farewell tour. The recognition was slow to start, but seemed fully underway by All-Star week.

The Cardinals don’t make a trip to Anaheim, but they do play at Dodger Stadium at the end of September. Roberts said the team would have some kind of celebration for Pujols .

For now, Pujols said he will continue to do what he’s done the last 22 years: put his team first and try to help them win — the Cardinals resume play Friday half a game out of first in the National League Central and tied for the final wild-card spot — and the weight of the emotions of his career will probably hit him the final week of the regular season.

Denial of responsibility! NewsUpdate is an automatic aggregator around the global media. All the content are available free on Internet. We have just arranged it in one platform for educational purpose only. In each content, the hyperlink to the primary source is specified. All trademarks belong to their rightful owners, all materials to their authors. If you are the owner of the content and do not want us to publish your materials on our website, please contact us by email – [email protected]. The content will be deleted within 24 hours.
AlbertAllStarbest sports newsCardinalsfarewellhelpskicknews update sports

For Kids in the Hospital, Video Games Are Part of Recovery

WhatsApp is working on these new features – Times of India