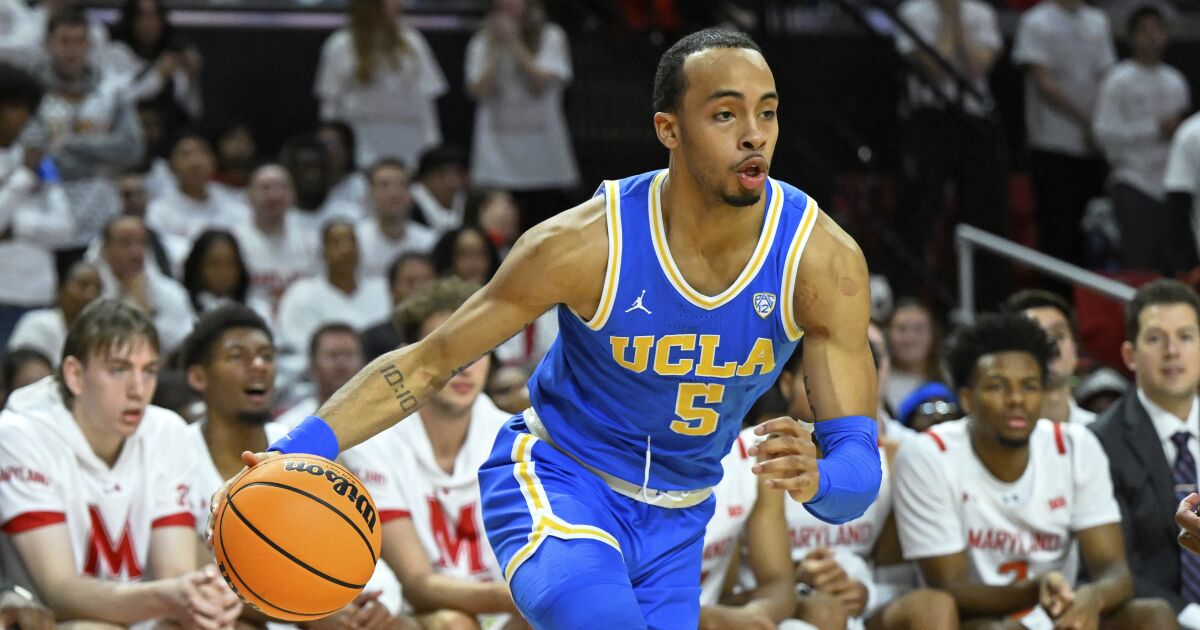 Amari Bailey available to return for No. 8 UCLA’s showdown with USC

At a time when it could use a boost, UCLA just got a little deeper, more athletic and increasingly dynamic on offense.

Amari Bailey is back.

The freshman guard who missed the last seven games with discomfort in his left foot is available to return Thursday against USC at the Galen Center, coach Mick Cronin said Wednesday.

The eighth-ranked Bruins went 6-1 in Bailey’s absence despite extended offensive lulls in several games. Bailey could compensate for several deficiencies with his superior passing and quickness. His ability to get to the basket can draw multiple defenders, giving him the option to find open teammates if he can’t find a shot to his liking.

Averaging 9.5 points and 3.3 rebounds while making 36.4% of his three-pointers, Bailey initially suffered his injury last month when Kentucky’s Oscar Tshiebwe stepped on his foot. Bailey played in the next game, against UC Davis four days later, before aggravating the injury and missing the next month.

Should he move back into the starting lineup, Bailey’s return would allow senior guard David Singleton to resume his sixth-man role while bolstering a bench that has been badly outscored with Singleton starting. UCLA’s bench was outscored by its counterparts by a 10-4 margin against Arizona, 12-7 against Arizona State, 16-0 against Colorado and 22-5 in the first meeting against USC.

What’s the key to shooting better?

“Passing,” Cronin said earlier this week. “I always say this to you guys — passing is the key to good offense. Throw in some good screening as well.”

One of the 25 best teams in the nation by nearly any objective measure, UCLA was left off the ballot of Associated Press voter David Thompson — no, not that David Thompson — this week. It’s nothing personal, Thompson said. “My plan was never to overlook UCLA,” Thompson, who writes for the Fayetteville Observer, told the Los Angeles Times. “I made a human error and forgot to put the Bruins in my poll.”

Denial of responsibility! NewsUpdate is an automatic aggregator around the global media. All the content are available free on Internet. We have just arranged it in one platform for educational purpose only. In each content, the hyperlink to the primary source is specified. All trademarks belong to their rightful owners, all materials to their authors. If you are the owner of the content and do not want us to publish your materials on our website, please contact us by email – [email protected]. The content will be deleted within 24 hours.
AmariBaileybest sports newsnews update sportsnewsupdatereturnshowdownsports news

Apple Support website gets its first major redesign in years

Struggling with January 26 Wordle? Clues to help with Wordle 586