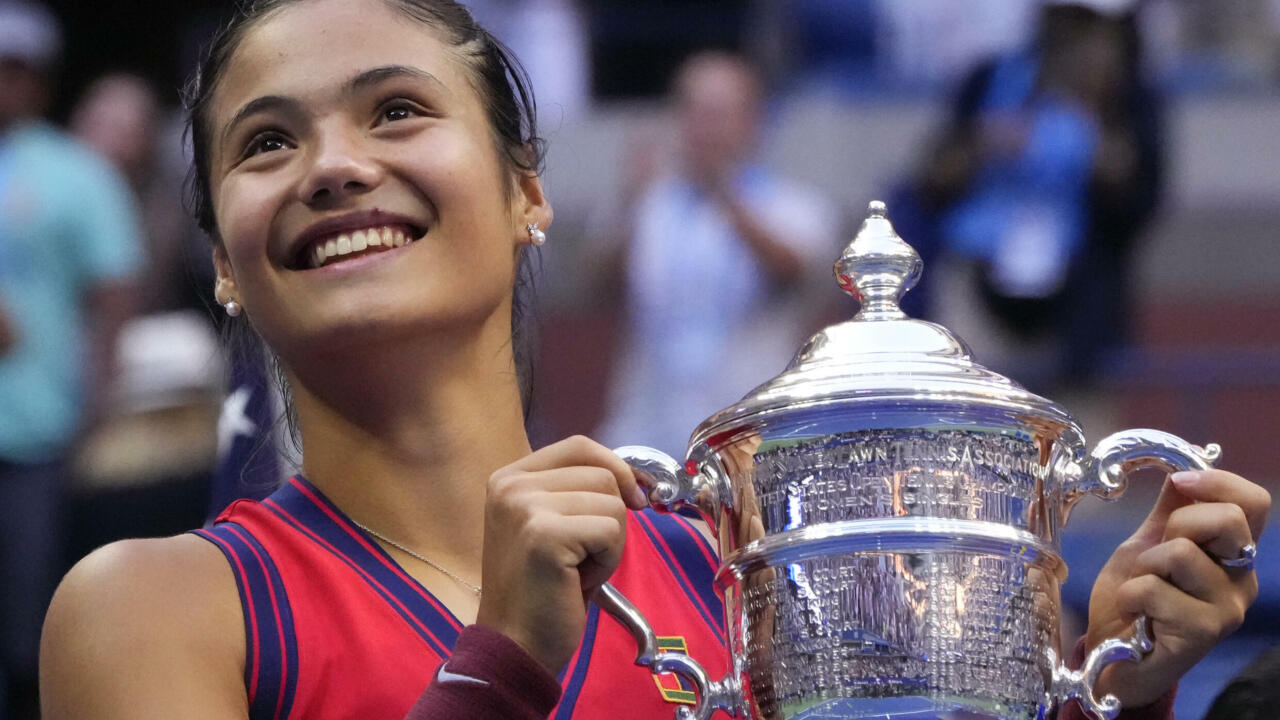 Emma Raducanu fell asleep as a little girl to visions of running through the stands to celebrate a Grand Slam title and lived the moment Saturday after capturing the US Open title.

The British 18-year-old beat 19-year-old Canadian Leylah Fernandez 6-4, 6-3 to become the first qualifier to win a Slam title, rolling through 20 sets without loss to hoist the trophy.

“It’s an absolute dream. You just have visions of yourself going up to the box, hugging everyone, celebrating,” she said. “For that moment to actually happen, I’m just so grateful.”

Her childhood visions returned as her epic run pushed her to becoming the youngest Grand Slam champion in 17 years and the youngest US Open winner since 17-year-old Serena Williams in 1999.

“Going to celebrate with your team, trying to find your way up to the box, just seeing them after the match, that has been playing in my head a couple nights. I’ve fallen asleep to that,” she said.

“To have the belief I did and actually executing, winning a Grand Slam, I can’t believe it.”

Raducanu has adopted a nothing-to-lose attitude and Slam success ensures it won’t change any time soon.

“I don’t feel absolutely any pressure,” Raducanu said. “I’m still only 18 years old. I’m just having a free swing as anything that comes my way. That’s how I faced every match here in the States.

“It got me this trophy so I don’t think I should change anything.”

Raducanu never dropped more than five games in any set and that happened only once, in qualifying, although she insisted every win had its challenges.

“I faced a lot of adversity in every single one of my matches,” she said. “What I did very well this tournament was press in the moments that I really needed to.”

While she may have faced adversity, she has not faced reality, setting aside her cell phone and the world outside to focus upon the US Open.

“I still haven’t checked my phone. I have absolutely no idea what’s going on outside of the little world that we’re in here,” Raducanu said.

“The biggest triumph for me is how I managed to just not think of absolutely anything else except for my game plan, what I’m going to execute. I just completely zoned in and focused on my craft.

“I think that’s definitely the biggest thing that’s probably helped me to win this title.”

So when it comes to things like how her US Open title will change her life, she hasn’t given it a thought. She can’t even say what’s up next week.

“I haven’t thought of any of that,” Raducanu said. “I have no idea when I’m going home. I have no idea what I’m doing tomorrow. I’m just really trying to embrace the moment, take it all in.

“I definitely think it’s the time to just switch off from any future thoughts or any plans, any schedule. I’ve got absolutely no clue. Right now, no care in the world, I’m just loving life.”

After failing to convert two match points on Fernandez’s serve, Raducanu scraped her left knee sliding on the court in the final game and opened a bloody cut, forcing play to halt while a trainer bandaged the wound.

“My knee cut pretty bad,” she said. “I didn’t actually want to stop because I thought it would disrupt my rhythm.

“But I couldn’t play on. I wasn’t allowed to because my knee was gushing with blood. The chair umpire said I needed to get it treated right away.”

She returned to face a break point in a pivotal moment, but saved it.

“Facing a breakpoint after a two-, three-minute disruption isn’t easy,” she said. “I managed for sure to really pull off the clutch plays when I needed to.”

That included match point a few moments later when she blasted her third ace.

“I don’t think I made one serve that wide in the whole match,” she said.

“I literally drove my legs up to that ball toss like never before. I landed it. (Then) just disbelief, trying to take everything in, all the moment.”

Denial of responsibility! NewsUpdate is an automatic aggregator around the global media. All the content are available free on Internet. We have just arranged it in one platform for educational purpose only. In each content, the hyperlink to the primary source is specified. All trademarks belong to their rightful owners, all materials to their authors. If you are the owner of the content and do not want us to publish your materials on our website, please contact us by email – [email protected]. The content will be deleted within 24 hours.
Loading...
absolutebest sports newsDreamGrand Slamnews update sportsnewsupdateOpenRaducanu