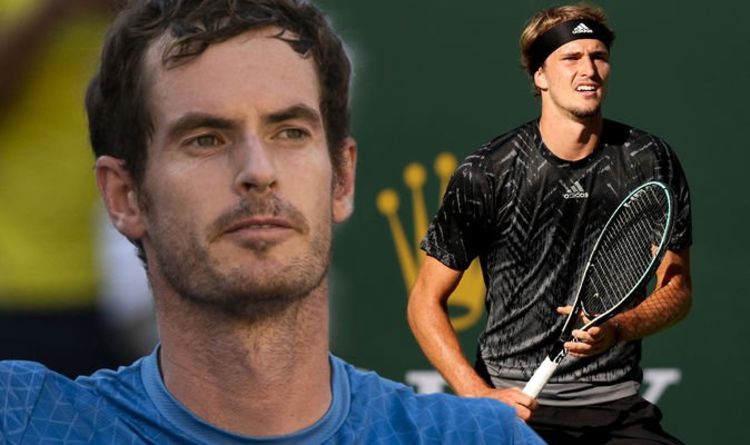 Andy Murray has claimed he is ready to beat the top players and win titles again before his desert grudge match with Alexander Zverev. The Scot produced one of his best displays since his hip surgery to beat Carlos Alcaraz at the BNP Paribas Open.

And the world No 121 has threatened to redeploy the underarm serve which saw him ace the young Spaniard as he pursues his first title since his emotional European Open triumph in October 2019.

Murray has not been past the third round of any event since as he has struggled with further injuries and Covid.

But his fightback against the teenage Alcaraz was vintage Murray. And the former world No 1, who has slipped down to world No 121, declared he has the form and fitness to end his dry spell by winning in the California desert.

“Two years ago I couldn’t believe I’d won a tournament again after everything had happened with the operations and stuff,” he said.

MUST READ: Murray produces insane shot against ‘future No 1’ in Indian Wells win

“It was just amazing. It’s probably been going a little bit slower than I would have liked but I’m slowly starting to get there again, and get to a level where it wouldn’t be a surprise if I won a tournament.

“I genuinely believe that I can win tournaments, again. There’s nothing that has happened recently, barring probably the Denis Shapovalov match that I played at Wimbledon where I got absolutely smoked, to make me think otherwise.

“But my preparation for the grass season was a disaster. It’s not easy playing with a metal hip and it is not easy everything that goes into getting ready for these events.

“But to do that against Alcaraz makes it worth it and gives me confidence and encouragement to keep going.

“I don’t see any reason why I can’t still compete against the top players and beat them in big events.”

Murray ranked the Alcaraz win alongside beating Stan Wawrinka to claim the title in Antwerp and his victory over Zverev in August 2020 – his last defeat of a top-10 player.

Now the new Olympic champion Zverev is facing an ATP investigation into allegations of assault made by the German’s former girlfriend Olga Sharypova in 2019.

Self-confessed feminist Murray first called for an ATP domestic abuse policy last year – and welcomed the probe before the tournament.

Zverev vehemently denies the accusations and said the enquiry is a chance to clear his name as Sharypova has never pressed criminal charges.

But there will be an extra edge to their third meeting – and not just because Zverev has never beaten the Scot.

Denial of responsibility! NewsUpdate is an automatic aggregator around the global media. All the content are available free on Internet. We have just arranged it in one platform for educational purpose only. In each content, the hyperlink to the primary source is specified. All trademarks belong to their rightful owners, all materials to their authors. If you are the owner of the content and do not want us to publish your materials on our website, please contact us by email – [email protected]. The content will be deleted within 24 hours.
AlexanderAndybest sports newsBritconfidentdownfallIndianMurray

If Rohit Sharma is fit, why can’t he be the captain in…

Report: Sean Payton Has Not Committed to Return as…