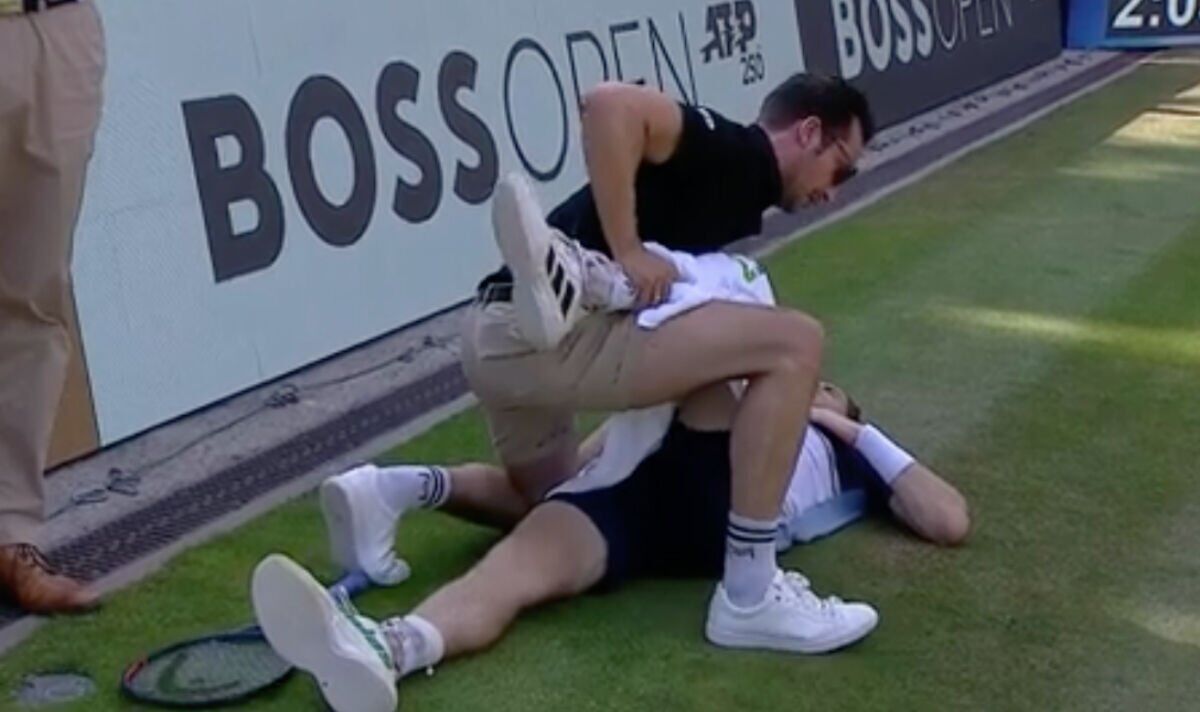 Andy Murray sparked concern during the third set of his Stuttgart Open final against Matteo Berrettini after requiring medical treatment from the physio while 4-6, 7-5, 1-0 down. The Briton appeared to be struggling with a groin or hip issue on his left side shortly after battling back to claim the second set in Germany.

Murray was broken to love in the first game of set three and then called the physio on to the court for several minutes of treatment, with the trainer massaging the area. The 35-year-old Glaswegian eventually returned to his feet to play on through the problem but was evidently moving with some difficulty.

He lost the second game of the third set but rallied back on his serve to clinch game three in what is his first grass-court final for six years, but Berrettini remains a break up. The two-time Wimbledon winner last contested a final on grass when he beat Milos Raonic to win his home Grand Slam for the second time back in 2016.

Murray has battled a whole host of injury problems since his last Slam triumph and British tennis fans will desperately hope he can enter this year’s Wimbledon fully fit after an encouraging run in Stuttgart. The world No 68 has already confirmed his return to the ATP rankings’ top 50 after this event.

Former world No 1 Murray claimed his first win over a top-five player for six years with the defeat of top seed Stefanos Tsitsipas in straight sets in the quarter-finals. He also needed only two sets to despatch of Nick Kyrgios in the semi-finals with the Australian losing his cool in the match and claiming he was subjected to racial slurs from the crowd.

Speaking after beating Kyrgios to reach the final, a proud Murray said: “It has been a long time since the last final on grass. A lot of ups and downs, but I kept going and kept working and finally managed to get to another one. I am proud of the effort I have put in.

“I was just a little more solid in the tie-break. I asked the questions. On these courts, when it is playing quick, the set often comes down to one or two points and I was a little more secure at the end of the first set.”

His opponent in the final Berrettini, last year’s Wimbledon runner-up, is the Stuttgart Open’s second seed having won the tournament back in 2019. The 25-year-old saw off Felix Auger-Aliassime in the final three years ago for his first ever grass title. Italian Berrettini also won Queen’s last year but lost in the Wimbledon final to Novak Djokovic.

Three-time Grand Slam winner Murray had met twice Berrettini before their meeting in Stuttgart, with one win apiece. Berrettini knocked Murray out at Queen’s last year on the way to his title, winning 6-3, 6-3 in London.

Denial of responsibility! NewsUpdate is an automatic aggregator around the global media. All the content are available free on Internet. We have just arranged it in one platform for educational purpose only. In each content, the hyperlink to the primary source is specified. All trademarks belong to their rightful owners, all materials to their authors. If you are the owner of the content and do not want us to publish your materials on our website, please contact us by email – [email protected]. The content will be deleted within 24 hours.
AndyBerrettinibest sports newsBritfinalinjuryMatteoMurray