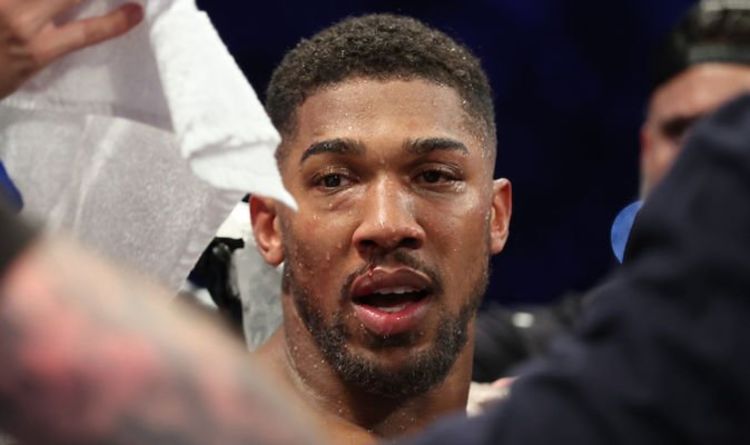 Anthony Joshua’s promoter Eddie Hearn has confirmed that the British boxer has been taken to hospital after his fight with Oleksandr Usyk on Saturday night. Joshua suffered the second loss of his professional career at the Tottenham Hotspur Stadium as former cruiserweight king Usyk took his WBA, WBO and IBF belts.

And Hearn fears his prize fighter suffered damage to his eye socket in the bout, confirming that he will receive medical attention to fully understand the severity of his injuries.

Speaking to BBC Radio Five Live, Hearn said: “When he lost in New York everyone started analysing the dressing room, the ring walk.

“He was fine, he was maybe a little too relaxed on the ring walk, he was shaking everyone’s hand, he was hugging a few people that is just AJ but I feel it was the wrong type of performance. Sometimes you have to use your attributes.

“[AJ] never really got going, he will go to hospital now, I don’t know if he has broken his eye socket it doesn’t look great.

“But when you go back, Tony Bellew’s comments about overthinking, and fatiguing you, it is like these last three or four days you get spellbound by Usyk and you end up giving him too much respect and that becomes a problem.

“AJ said he is not going on holiday that he is going straight back to the gym and that is not a good idea.

“You could make any manner of excuse but he got beat by the better man. Sometimes you have to take it on the chin, when you lose you shake someone’s hand and say congratulations and say you will come back stronger.”

It is unclear which hospital Joshua has been taken to but Usyk was also photographed being seen to by medics in hospital with cuts and bruises around his eyes.

Updates on both are expected to follow in the coming days, with both no doubt hoping that their injuries are not serious so that they can contest a rematch early in 2022.

Joshua will be desperate to reclaim his titles just as he did after suffering the first loss of his career to Andy Ruiz Jr in 2019, before beating the Mexican-American in their second bout six months later.

In a separate interview immediately after the fight with Sky Sports, Hearn said: “It was a tough fight, a gruelling fight. I’ve spoken to him, he’s not quite talking the way you’d expect him to talk at the moment.

“He’s devastated, already talking about training again. They want to look at the eye socket, he says it’s fine. But you know, a devastating defeat.

“The desire will still be there but you have to be good enough. That was an average performance by AJ. He can do so much better but he’s facing a pound for pound great. You can criticise him but he is facing the best.

“There is a new unified world heavyweight champion. There is no point sulking about it. He will go again, but tonight belongs to Usyk.”

The victorious Usyk reflected: “The fight went exactly the way I expected it to go. There were a couple of moments when Anthony pushed me hard, but no, nothing special.”

“I’ve been working so hard since January in preparation for this fight. It took me half a year and I didn’t see my family for so long. I miss my children and watching them play.

“I want to go home and see my family, and I’m not thinking about a rematch at the moment.”

Denial of responsibility! NewsUpdate is an automatic aggregator around the global media. All the content are available free on Internet. We have just arranged it in one platform for educational purpose only. In each content, the hyperlink to the primary source is specified. All trademarks belong to their rightful owners, all materials to their authors. If you are the owner of the content and do not want us to publish your materials on our website, please contact us by email – [email protected]. The content will be deleted within 24 hours.
Anthonybest sports newsbrokenconcerneyeHospitalJoshuaLoss