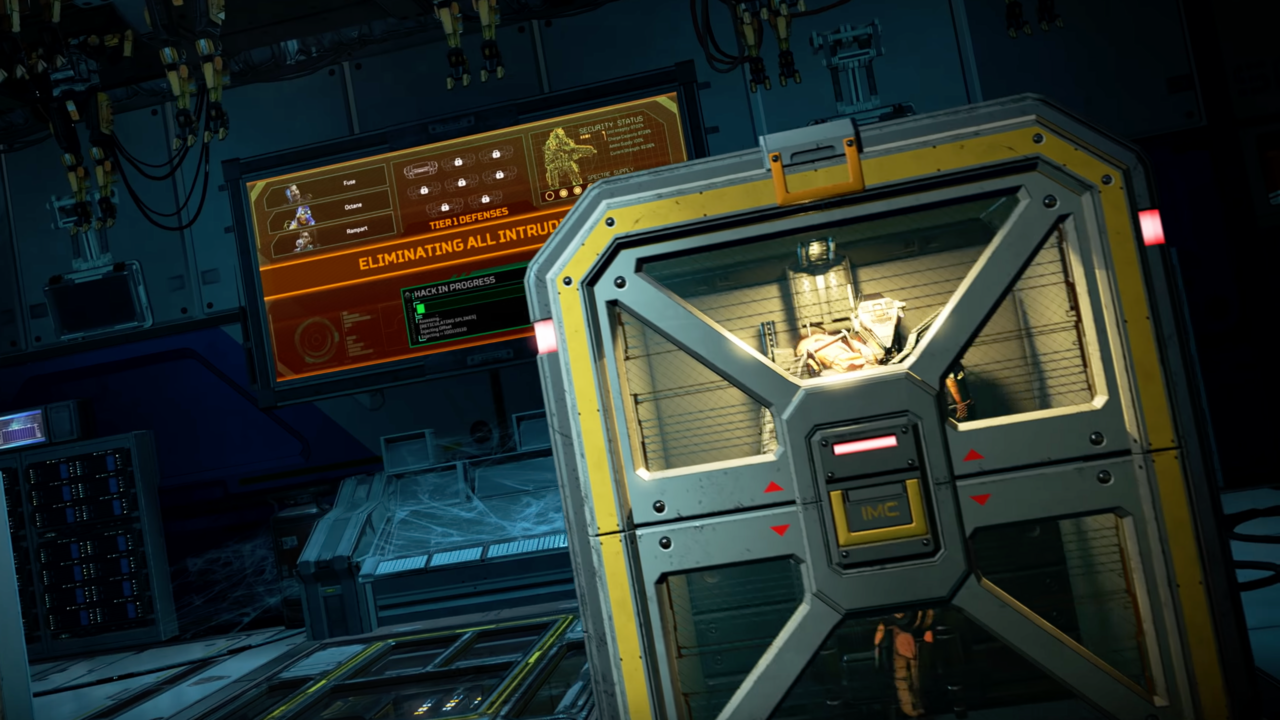 The recent addition of Titanfall 2’s Stalkers to the IMC Armories located on Apex Legends’ Storm Point map has made it the most PvE-heavy map in the entire game, and with the exception of Flyers, every single one of the NPCs on the island is out to get you. But facing off with AI enemies in the ring certainly has its benefits, as the Carthage spiders and Prowlers on Storm Point leave excellent goodies behind. The Stalker-class robots now lurking within the IMC armories on the tropical paradise are similar, but they don’t drop loot–instead, killing them will unlock special loot bins within the IMC Armory itself, with loot tailored to each squad member’s specific loadout.

These ruthless robots have made several appearances in Apex’s YouTube videos–first when they attacked Loba in the Season 5 launch trailer and later when Pathfinder faced off with one in Stories from the Outlands: Fight Night. While entering an IMC Armory can give your squad a leg up on the competition, facing the AI army in combat can also have some downsides, and if you’re not careful, you may find yourself in a deathbox. But with the right preparation, taking down these artificial monsters can be a breeze. Follow these three tips and you’ll be kicking robo-butt in no time.

Know what to expect

Once you’ve located (or stumbled upon) an IMC armory and made sure the coast is clear of any enemy players, enter and activate the terminal with the large screen. Make sure to give your teammates a chance to get inside before you engage the enemy, because once you activate the terminal, the Armory will seal itself shut and begin to unleash its army of artificial predators on anyone who remains inside.

Attacks come in waves, and if you find yourself running low on ammo (or just unhappy with your current weapon), you can swap it for one of the many firearms on display inside the armory. Fortunately, the Stalkers aren’t particularly smart, so it’s quite easy to get behind them and take them down one by one. Just be sure to stay aware of your surroundings–while they may not be as smart as Prowlers, they do have weapons.

Once you’ve killed the last Stalker, an announcer will inform you that you’ve passed the security clearance, and assuming you live to tell the tale, the supply bins lining the sides of the Armory will unlock, giving you and your squad access to high-tier gear. This is also an excellent opportunity for Lifeline to heal her teammates, for Loba to make use of her Black Market, or for Bloodhound to scan and see if any enemies are nearby, without those enemies being able to access the Armory.

Once you’re all finished gearing up, access the terminal again and the door to the Armory will open. But one of the things that makes these loot vaults so special is that they also double as re-deploy beacons. Once you’ve killed off all the Stalkers and opened the door, a series of green rings will appear on a glowing green square on the ground. Step on it, and you’ll be launched high into the air, allowing you to skydive to a different POI of your choosing.

One of the keys to surviving an encounter with Stalkers is teamwork, but you can’t always depend on them (and there’s always the chance they could spend half the match in a deathbox), so it’s important to choose a Legend with abilities that will most benefit you.

With 21 legends to choose from, there are plenty of options, but the ones we’ve found to be the most helpful so far include:

Legends like Valkyrie and Fuse are, for the most part, useless when it comes to the IMC Armories–Fuse can easily blow himself up or burn himself using his abilities in such cramped quarters, and Valkryie’s VTOL Jets are useless in a room with a ceiling, not to mention the fact that the Armory itself will mimic her ultimate ability once you clear out all the Stalkers and activate the re-deploy beacon. Similarly, Pathfinder’s grappling hook isn’t of much use inside the Armory, either.

As long as you enter the IMC Armory well-equipped and well-informed, you should have no trouble taking out the evil robots and claiming that sweet loot for yourself.

Denial of responsibility! NewsUpdate is an automatic aggregator around the global media. All the content are available free on Internet. We have just arranged it in one platform for educational purpose only. In each content, the hyperlink to the primary source is specified. All trademarks belong to their rightful owners, all materials to their authors. If you are the owner of the content and do not want us to publish your materials on our website, please contact us by email – [email protected]. The content will be deleted within 24 hours.
ApexArmoriesbest games newsgame updategames newsIMCLegendsnews update games