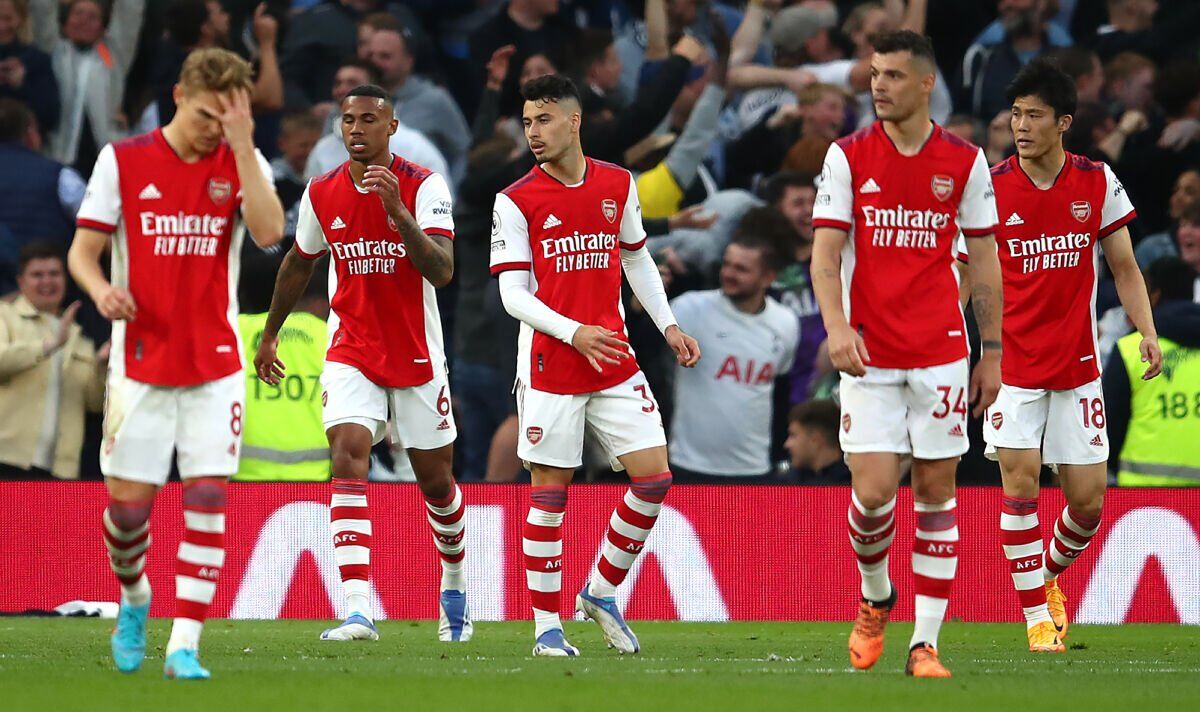 Fifteen minutes of pure derby mayhem at Tottenham cost Arsenal the chance to clinch their return to the Champions League after an absence of six years. More importantly, the worst sort of defeat imaginable raises question marks about their temperament and ability to see the job through.

Add to that a potential centre-back crisis with sent-off Rob Holding suspended and possibly both Gabriel and Ben White injured for Monday’s trip to Newcastle. Certainly, there are better ways for Arsenal to enter the final week of the season with a top four place still in their own hands.

Not that their neighbours mind. Spurs fans have waited five years for a fully-fledged derby match on ‘home’ turf – the year at Wembley and Covid restrictions intervening during the interim – and it was worth the wait.

Their new stadium rocked to the frantic to-and-fro of red against white, with the shot at Champions League glory adding more than a few decibels to the occasion. And to start with Arsenal looked intent on securing the famous win they needed to get them over the line.

Antonio Conte’s mood was helped little by an early yellow card flashed at him by referee Paul Tierney when he protested one decision a little too flamboyantly. However, then came that quarter-hour spell where Arteta’s meticulous “process” completely unravelled.

A deep cross from Dejan Kulusevski would probably have cleared everybody but a clumsy shove by Cedric Soares on Heung-min Son at the far post was enough for Tierney to point at the spot. Harry Kane, already the top scorer in this fixture, needed no second invitation to score his 12th north London derby goal by sending Aaron Ramsdale the wrong way.

Goal No 13 would be along shortly, but not before Holding had made Arsenal’s night even more hopeless. He had already had two digs at Son and a third grapple with the Spurs player in the 27th minute finally earned him a yellow card.

Just six minutes later, a flailing elbow as the pair chased a long Eric Dier through ball, was enough to win him his second and reduce Arsenal to 10 men. The visitors were still clearly in a state of chaos when, five minutes later, they faced a Spurs corner with no idea who was marking who.

Son swung the ball out to Rodrigo Bentancur, whose downward header was met by Kane at the far post with a stooping header into the back of the net. From the sanctity of the dressing room, could Arteta conjure some kind of redemption?

Within two minutes of the restart, Arsenal were three down, when Gabriel’s attempt to stop Kane from turning simply allowed Son the room to sweep his shot past Ramsdale. Ramsdale prevented Kane from completing his hat-trick with a 30-yard firecracker while a muscle injury to Gabriel just added to Arsenal’s woe.

The final whistle could not come quickly enough for them. Of course, Spurs still need to follow this up by beating Burnley on Sunday. Do that, and they can sit down with interest and see how Arsenal cope with the pressure cooker of St James’ Park the following evening. Popcorn optional, but viewing essential.

Denial of responsibility! NewsUpdate is an automatic aggregator around the global media. All the content are available free on Internet. We have just arranged it in one platform for educational purpose only. In each content, the hyperlink to the primary source is specified. All trademarks belong to their rightful owners, all materials to their authors. If you are the owner of the content and do not want us to publish your materials on our website, please contact us by email – [email protected]. The content will be deleted within 24 hours.
ArsenalArtetasbest sports newsDefeatdoubtsMarksmenMikel