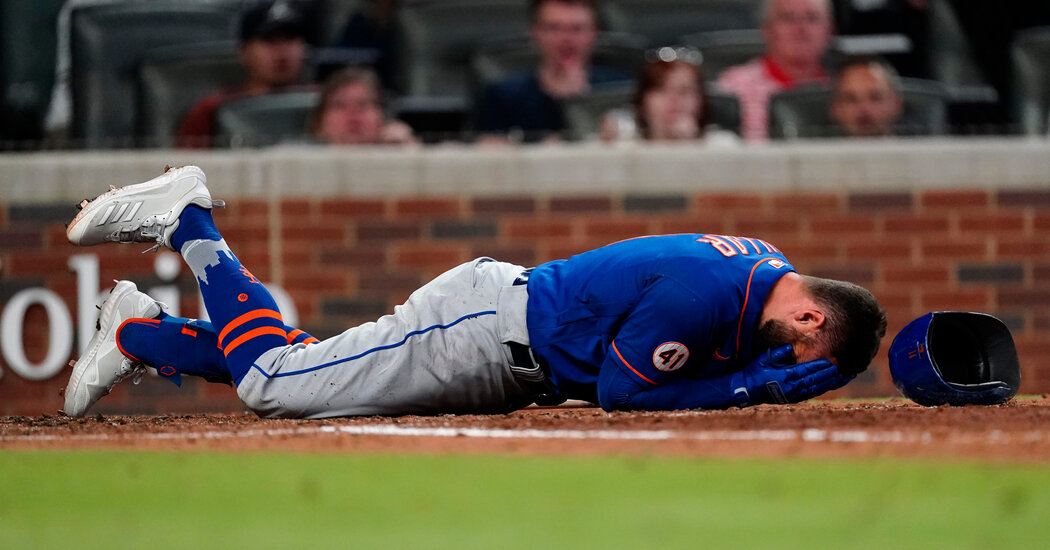 As Velocity Increases, So Does Danger to Batters

For two decades with the Houston Astros, Craig Biggio was a human magnet for five-ounce missiles wrapped in cowhide. Nobody alive has been hit by more pitches than Biggio, who somehow made it to Cooperstown, N.Y., with all his bones intact.

Now 55 years old, Biggio is a baseball dad; his son, Cavan, is the Toronto Blue Jays’ third baseman. Cavan, 24, wears a helmet with an extension that covers his jaw, to his father’s relief. With more batters being hit by pitches than ever before, modern players need all the protection they can get.

“Ever since he wore it, I was like, that’s great, I’m happy for him that he’s comfortable with it and he can see out of it, because it’s only going to protect you — and all it takes is one pitch, that’s all,” Biggio said this week. “I mean, Dickie Thon — it was one pitch. He was the A-Rod of that generation before he got hit in the eye.”

Every hitter takes the risk of being victimized like Thon, a young shortstop for Houston who never made another All-Star team after a Mike Torrez fastball shattered his orbital bone in 1984. The latest harrowing reminder came on Monday in Atlanta, when the Mets’ Kevin Pillar sustained multiple nasal fractures after a Jacob Webb fastball drilled him in the face.

The sight of Pillar writhing on the dirt, with blood pouring from his nose, reverberated around the game.

“My family was here and they heard me scream when he got hit,” said Phillies Manager Joe Girardi, who was watching on a day off.

“I just think with the velocity that is going on with pitchers today, and them pitching up, the ball sometimes takes off a little bit more because of the spin rate up there. I think we worry about up and down more than we do command to the corners.”

Girardi, whose right fielder, Bryce Harper, was hit in the face by Genesis Cabrera in St. Louis last month, said hitters often have to start their swings earlier to catch up to fastballs.

“I think it’s as dangerous now as it’s ever been,” he said, “and it’s concerning to me.”

With injuries rising overall after last year’s abbreviated season, baseball hardly needs further reason to worry about players being sidelined. But the numbers on hit batters over the last two seasons combined are troubling: In more than 3,000 games through Tuesday, batters had been hit by pitches 1,384 times, an average of 0.46 per game. No season between 1899 and 2017 had a rate as high as 0.4, but baseball has averaged at least that many in each of the last four years.

If that sort of factoid seems vaguely familiar, add it to the list in a season of extremes. The major league batting average is .236, which would be a record low, and the league strikeout rate — 8.97 per game — would be a record high.

Average fastball velocity is also at a peak, with the average of 93.4 miles an hour being the highest in the 20 years Fangraphs has tracked radar-gun readings. Fastball usage, meanwhile, has dipped to just over 50 percent, with technology helping pitchers design more effective off-speed offerings.

So while pitchers fire fewer fastballs, the ones they do throw can inflict more damage, especially when they are not as refined.

“It’s a pretty simple answer: I think velocity has become the primary factor in determining whether a guy can pitch at the highest level of baseball, as opposed to pitchability,” said Pillar, who was placed on the injured list Tuesday and will need plastic surgery on his nose.

“You’re seeing more and more guys that throw hard and teams are hoping that they could develop pitchability and control and a secondary pitch. You’re not seeing as many guys that throw in the lower 90s or 90 that have very high pitchability with multiple pitches to get guys out.”

Rosters had more room than ever last year for strong but erratic arms, with teams starting the season with 30 active players before settling at 28. Even at the current limit of 26, rosters usually have at least 13 pitchers. That leaves space for players developed as Pillar described — throw hard, find a passable off-speed pitch and head to the big leagues.

If those types of pitchers help a team win, Girardi acknowledged, teams will continue to promote them from the minors. But with more and more batters being plunked, Girardi has been warming to one of the more radical changes baseball will institute this summer in the independent Atlantic League.

“It was the first time I thought that maybe moving the mound back was a good idea,” he said. “I really never thought that, because I started thinking, ‘A guy that’s been throwing a curveball 60 feet 6 inches, now you’re asking him to throw it a foot or two further, how’s that going to change him and how long’s that going to mess him up?’ But I started thinking: ‘Would the hit by pitches go down if the mound was further back?’ I really don’t know.”

Hitters, too, are partly to blame for the trend. The Oakland Athletics’ batters are leading the American League in hit-by-pitches for the third year in a row — mostly, Manager Bob Melvin said, because two of their players, Mark Canha and Ramon Laureano, stand so close to the plate.

“You really very rarely see what you think are intentional hit by pitches,” Melvin said. “And I think teams are just pitching more inside because a lot of guys are on the plate a little bit more, trying to take away the outside corner, make that more middle. And I don’t know that the command with guys these days is as good as it was in the past, either.”

As a player in the 1980s and ’90s, Melvin was the antithesis of Craig Biggio; he was hit by a pitch just once in more than 2,000 plate appearances. (“Which means nobody was really too worried about me,” said Melvin, who hit .233 for his career.) Biggio was a much more accomplished hitter and pitchers knew he could beat them inside.

“I stood on top of the plate because my weakness was the outside half of the plate, so I could hit you inside all day long, it didn’t matter,” said Biggio, who was hit by 285 pitches, two behind the record-holder, Hughie Jennings, who played mostly in the 1800s. “If you threw it middle-in, I’m good, but if you threw it middle-away, that’s where I was weaker. So I stood on top of the plate and I understood that also, from being a catcher, you’re going to get hit and that’s part of the game.”

It is, but it’s a much bigger part of the game than it was when Biggio arrived. In 1989, Biggio’s first full season, teams averaged just .19 hit batters per game. That means the rate has more than doubled for his son’s generation.

“The strike zone is definitely a lot higher now; it might have been a little bit wider back in the day,” Biggio said. “Now if you’ve got a power arm and you can throw it up in the zone, maybe you don’t have to be as accurate, just hit the top of the zone and get the strikeout — and then every now and then you’re hitting guys.”

Incredibly, none of the pitches that hit Biggio forced him to the disabled list. He even stayed in the game after his worst beaning: a fastball to the cheek from the Chicago Cubs’ Geremi Gonzalez in 1997.

But Biggio will never forget the sensation, and will always be grateful for his luck.

“It felt like getting hit in the face with a sledgehammer,” he said. “You count your blessings every time you can get up and walk to first base and keep playing.”

Denial of responsibility! NewsUpdate is an automatic aggregator around the global media. All the content are available free on Internet. We have just arranged it in one platform for educational purpose only. In each content, the hyperlink to the primary source is specified. All trademarks belong to their rightful owners, all materials to their authors. If you are the owner of the content and do not want us to publish your materials on our website, please contact us by email – [email protected]. The content will be deleted within 24 hours.
Battersbest sports newsDangerIncreasesnews update sportsnewsupdatesports newssports update

Rural Areas Are Looking for Workers. They Need Broadband to Get Them.