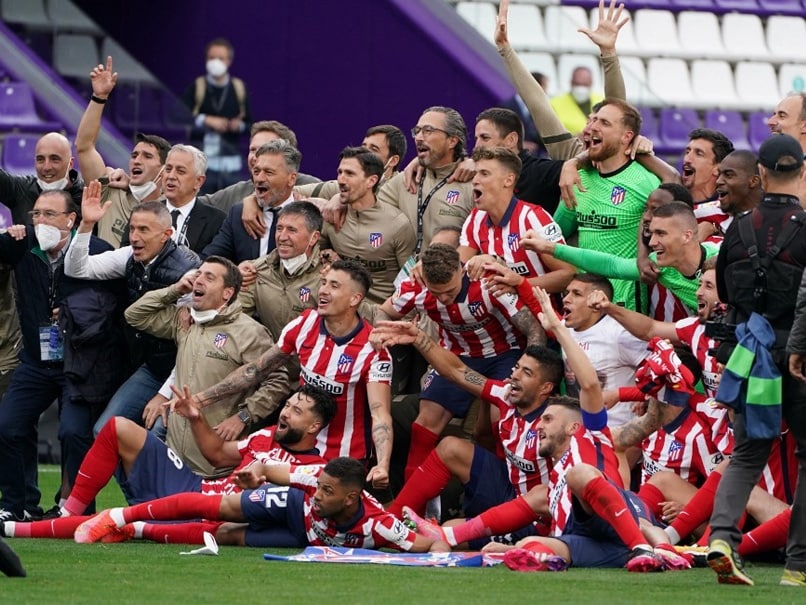 Atletico Madrid won La Liga and Luis Suarez found vindication, his goal securing the 2-1 victory over Real Valladolid on Saturday that clinched his team another remarkable Spanish title. Suarez began the season crying after being forced out of Barcelona but ended it with his 21st goal of the season earning Atletico a first league triumph since 2014, this one at the expense of Real Madrid. Atletico knew victory would guarantee them the title regardless of what Real Madrid did at home to Villarreal but it was never comfortable, with Valladolid taking a shock early lead. Real Madrid were behind too for most of the afternoon but Karim Benzema equalised in the 87th minute and Luka Modric even scored a late winner for 2-1 at Valdebebas, leaving Atletico hanging on at the end, as they were suddenly one goal away from squandering it all.

When the final whistle blew, the players ran onto the pitch, Suarez underneath a pile of red and white shirts, with Europe’s most nerve-wracking and unpredictable title race finally complete.

Just over a week ago, coach Diego Simeone said this was the “Suarez Zone” and so it proved, the Uruguayan scoring the winner against Osasuna last week to keep the title in Atletico’s hands and then again on the last day to put their name on the trophy.

This is only the second time in 17 years that a team other than Barcelona or Real Madrid have won the title, with Atleti claiming the other one under Simeone in 2014.

Atletico went into the game having been top since December and on the back of beating Osasuna with two goals in the last eight minutes, a victory that was so dramatic it felt like it would prove decisive.

But Atletico have done nothing the easy way this season, with their 10-point lead in February cut to two in May and their position at the top of the table relying on numerous slip-ups from both Real Madrid and Barcelona.

So it was apt that faced with beating Real Valladolid, who were 19th in the table, they still had to scrape over the line.

Several hundred Atletico fans gathered in Valladolid’s Plaza Mayor in the hours before kick-off to sing songs and a similar number made it outside the stadium, where they were cordoned off in a cess-pit of nerves and anticipation.

Suarez had a couple of early openings but any hopes for a comfortable afternoon were dashed in the 18th minute when Valladolid took the lead.

It came from an Atletico corner as Yannick Carrasco lost the ball and Valladolid broke at speed, pinging passes through midfield and finally through to Oscar Plano, the former Real Madrid youngster who pulled away and fired past Jan Oblak.

There was plenty of time left and the other consolation for Atletico was Real Madrid fell behind too, Gerard Moreno’s poked pass causing confusion at the back, with Yeremi Pino prodding Villarreal into the lead.

Atletico pushed as Suarez’s effort curled wide and Felipe headed straight at Jordi Masip but they also looked for calm. Players screamed at Oblak to give the team a moment to regroup. Simeone told the substitutes to quieten down.

Both title contenders were trailing at half-time but Atletico came out with renewed vigour and a crucial few minutes fell their way.

Real Madrid struck first, Benzema heading in Casemiro’s cross before Angel Correa levelled for Atletico as well, collecting on the edge of the area and firing through the legs of Jawad El Yamiq.

Atletico’s equaliser, though, was made all the more precious after Real Madrid’s was ruled out, Benzema’s left arm shown to be offside by VAR.

Valladolid might have scored again but Shon Weissman headed over with the goal gaping and then Atletico took the lead, a gift of a pass-back by Sergi Guardiola allowing Suarez to skip clear.

Suarez slid the ball past Masip before ending up under a pile of Atletico teammates.

Real Madrid equalised in the 87th minute, Benzema curving a delightful finish into the top corner and it was still not over, Modric scoring again to leave Atletico with some nail-biting final moments. They got over the line.

Denial of responsibility! NewsUpdate is an automatic aggregator around the global media. All the content are available free on Internet. We have just arranged it in one platform for educational purpose only. In each content, the hyperlink to the primary source is specified. All trademarks belong to their rightful owners, all materials to their authors. If you are the owner of the content and do not want us to publish your materials on our website, please contact us by email – [email protected]. The content will be deleted within 24 hours.
atlético madridAtleticoBeatingbest sports newsFootballfootball ndtv sportsLigaMadrid

New evidence of how and when the Milky Way came together: Aging individual stars helped date an early merger event