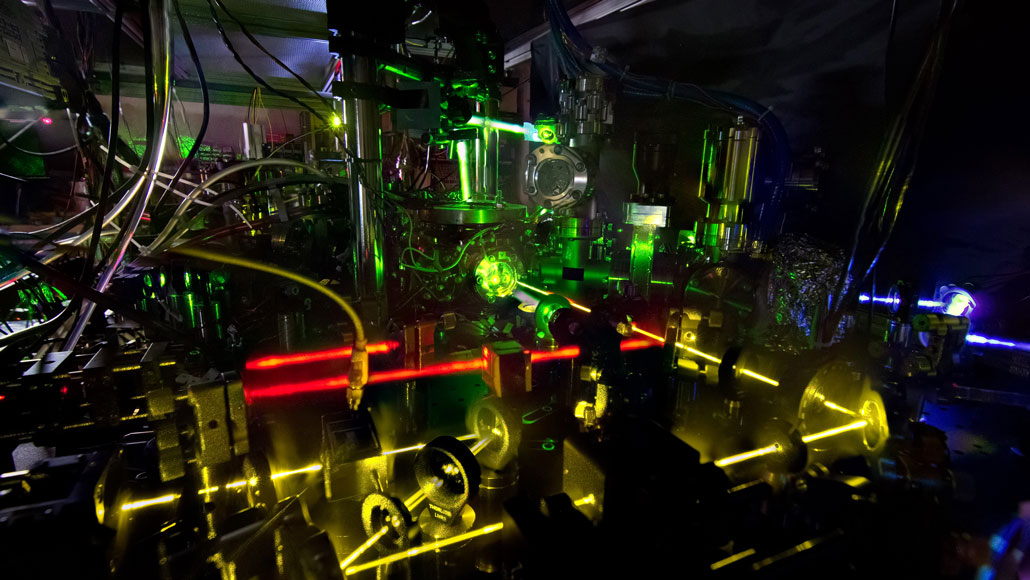 Atomic clocks take a step toward redefining the second

A new measurement moves scientists closer to revamping how we keep time.

After scientists redefined the unit of mass, the kilogram, in 2019, they set their sights on overhauling the fundamental unit of time, the second (SN: 5/20/19). Now, comparisons between three atomic clocks mark an important step toward that goal.

Since the 1960s, the second has been defined by atomic clocks made of cesium atoms, which absorb and emit light at a particular frequency that determines the length of a second. But “there have been a lot of improvements in atomic clocks since then,” says physicist David Hume of the National Institute of Standards and Technology in Boulder, Colo. Improved timepieces called optical atomic clocks (SN: 2/21/14) could be used to more precisely define the second.

But first, scientists must ensure they fully understand the new clocks, for example by comparing the frequencies of light from different timepieces. Now, scientists with the Boulder Atomic Clock Optical Network, or BACON, have made such comparisons, measuring the ratios of frequencies of three atomic clocks, one made of ytterbium atoms, one of strontium atoms and one made with a single electrically charged aluminum atom (SN: 10/5/17). The results are the most precise clock comparisons yet, with uncertainties less than a quadrillionth of a percent, the researchers report in the March 25 Nature.

Because the three clocks were in different locations — two at NIST and the other 1.5 kilometers away at the research institute JILA — the team compared the clocks by sending information across an optical fiber and through an open-air link. This ability to compare distant optical atomic clocks is a step toward clock networks that could be used to make precise measurements such as characterizing Earth’s gravity and testing fundamental physics.

Denial of responsibility! NewsUpdate is an automatic aggregator around the global media. All the content are available free on Internet. We have just arranged it in one platform for educational purpose only. In each content, the hyperlink to the primary source is specified. All trademarks belong to their rightful owners, all materials to their authors. If you are the owner of the content and do not want us to publish your materials on our website, please contact us by email – [email protected]. The content will be deleted within 24 hours.
atomicbest technology newsclocksnews update technewsupdateredefiningsteptech news

Overwatch is stopping sales of loot boxes, here’s why…

Google wants you to ‘help’ Apple get the message to improve…