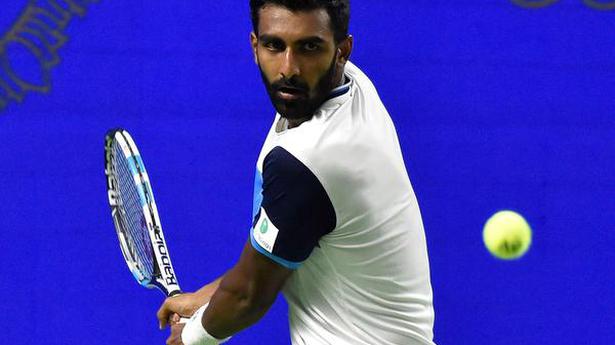 Ranked 221, left-handed Prajnesh beat 119th ranked Galan 6-4 6-4 in one hour and 13 minutes in the first round at court number six of the Melbourne Park

Ranked 221, left-handed Prajnesh beat 119th ranked Galan 6-4 6-4 in one hour and 13 minutes in the first round at court number six of the Melbourne Park.

He will next take on the winner of the match between Germany’s Maximilian Marterer and Croatia’s Nino Serdarusic.

Prajnesh hit a crushing backhand winner from the middle of the court to open up a break opportunity in the third game of the opening set and converted the second chance with a deep return that Galan sent on the net with his forehand.

With similar style and strategy, both the players were trying to make deep returns and dispatched the short balls for easy winners.

It was about who did it more consistently. Prajnesh’s better service games stood him in good stead. The break stayed with the Indian and he served the opening set at love.

Prajnesh then broke his rival in the very first game of the second set. At 30-30, Galan hit a backhand wide and then failed to put the ball across the net on breakpoint.

The southpaw made it 2-0 when Galan hit a forehand on the net, although Prajnesh made it a bit difficult for himself, letting his rival take two points after going up 40-0.

Prajnesh found himself down a break point when he was serving for the match as he hit a forehand long at 30-30 but saved that with a good serve.

Again, he hit a forehand soaring over the baseline with nerves perhaps getting the better of him. However, he saved that break chance too with a booming serve.

He eventually, finished the match with an easy winner in open court with Galan stranded on one flank of the court.

Ramkumar Ramanathan and Yuki Bhambri are also in contention and will open their respective campaigns in men’s singles qualifiers on January 11, while Ankita Raina will make yet another to crack women’s singles main draw.

Denial of responsibility! NewsUpdate is an automatic aggregator around the global media. All the content are available free on Internet. We have just arranged it in one platform for educational purpose only. In each content, the hyperlink to the primary source is specified. All trademarks belong to their rightful owners, all materials to their authors. If you are the owner of the content and do not want us to publish your materials on our website, please contact us by email – [email protected]. The content will be deleted within 24 hours.
221 rankedAustralianAustralian Open Qualifiersbest sports newsMovesnews update sportsnewsupdateOpen

Next Celebrity GETTR convert? Farage and the Dogefather gain traction with political bettors