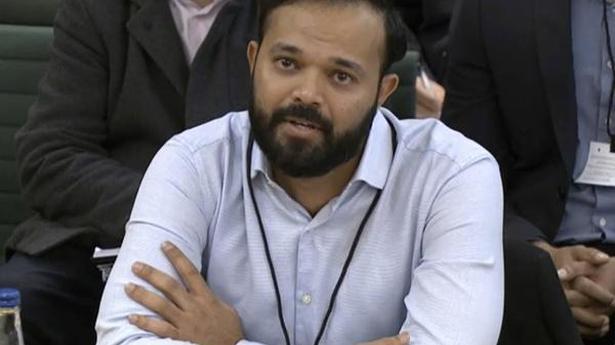 Former Yorkshire player Azeem Rafiq broke down in tears on Tuesday as he told a British parliamentary committee of “inhuman” treatment at the cricket club and described the sport in England as riddled with racism.

In more than an hour of questioning by members of parliament, Rafiq, 30, an offspin bowler and former captain of the England Under-19s of Pakistani descent, catalogued a damning culture of widespread racism at Yorkshire.

He and other players with Asian backgrounds were subjected to comments such as “You lot sit over there” and routinely referred to as “Paki”, Rafiq said. “I felt isolated, humiliated at times,” he added in emotional testimony to the parliamentary Digital, Culture, Media and Sport (DCMS) panel.

Rafiq, who played for Yorkshire from 2008-14 and again from 2016-18, recounted having red wine poured down his throat as a 15-year-old and spoke of Asian players being blamed for mistakes while they were fasting.

He spoke of being “ripped to shreds” by former coach Martin Moxon on his first day back after the death of his child.

He also said the racism he endured at Yorkshire was “without a shadow of doubt” replicated across the country and said the England and Wales Cricket Board (ECB) were more concerned with box-ticking exercises than increasing the number of South Asian players becoming professionals.

Former Yorkshire chairman Roger Hutton and Tom Harrison, chief executive of the England and Wales Cricket Board (ECB), were due to answer questions later.

Hutton resigned following criticism of Yorkshire’s handling of an investigation into the claims first made by Rafiq in 2020. In his resignation latter Hutton said there had been “constant unwillingness” from members of Yorkshire’s hierachy “to apologise and to accept racism and to look forward.”

‘Racism is not banter’

Yorkshire have been removed as a host for international matches and have lost key sponsors.

Rafiq did not hold back about his experiences at the club. He described the atmosphere in the dressing room under former captain Gary Ballance as “toxic”.

“Andrew Gale came in as coach, Gary Ballance as captain, and the temperature changed. I felt isolated. On tour, Gary Ballance walked over and said: ‘Why you talking to him?’ Going past a corner shop, I was asked if my uncle owned it,” he said.

“(Yorkshire director of cricket) Martin Moxon and (head coach) Andrew Gale were there. It never got stamped out.

“In 2017 we went through a difficult pregnancy and the treatment I received was inhuman,” Rafiq trailed off as he broke down.

Yorkshire said last week that Moxon was absent from work due to a “stress-related illness”, while Gale had been suspended for an alleged anti-Semitic tweet he sent in 2010.

Ballance, who played 23 Tests for England, had described Rafiq as his “best mate in cricket” but admitted he used a racial slur and regretted his actions.

Rafiq also said he had been “pinned down” at the age of 15 and had red wine “poured down” his throat while Gale and Moxon did not show any compassion after the stillbirth of his son.

Asked about the scale of the problem in English professional cricket, Rafiq said: “It’s scary. It’s clear the problem is there. Everyone has known it for a very long time.

“It’s an open secret. I’ve seen that if you speak out, your life is made hell.”

Denial of responsibility! NewsUpdate is an automatic aggregator around the global media. All the content are available free on Internet. We have just arranged it in one platform for educational purpose only. In each content, the hyperlink to the primary source is specified. All trademarks belong to their rightful owners, all materials to their authors. If you are the owner of the content and do not want us to publish your materials on our website, please contact us by email – [email protected]. The content will be deleted within 24 hours.
andrew galeasian cricketersAzeemAzeem Rafiqazeem rafiq parliament testimonybest sports newscounty cricketCricket

India vs New Zealand: We Won’t Prioritise Any Format And There Will Be No Let-Up In Our Preparation, Says Rahul Dravid | Cricket News

Streamers Urge Twitch to Include Disability Pride Month for…