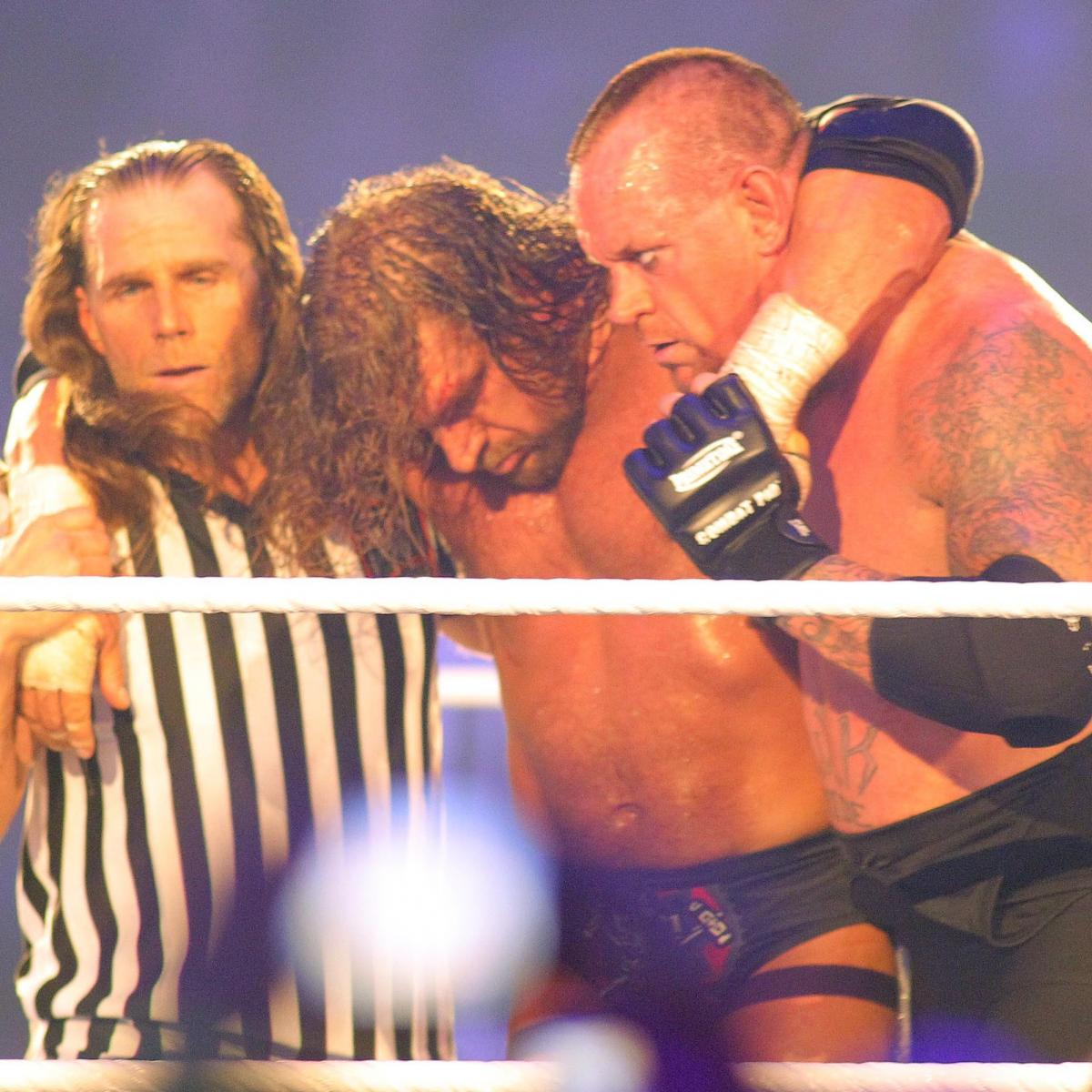 The B/R community has always been outspoken, especially when it comes to opinions on pro wrestling and its biggest stars.

We will answer your questions and react to your hot takes about WWE, All Elite Wrestling and the world of pro wrestling.

This week’s question: What is your favorite Undertaker match? With so many classics to choose from, this was probably a hard choice for a lot of people.

Check out what the B/R community thought.

At the time, I thought WWE was being a little tasteless by using Paul Bearer’s death as part of the storyline, but knowing how much William Moody loved this business, I think he would have been alright with it.

The match they had at WrestleMania 29 was memorable and proved Punk didn’t have to be booked as an underdog when he faced guys who were almost twice his size.

There was no title on the line. This was just a battle of pride with a simple but effective story. Good vs. evil is always a reliable formula in pro wrestling.

Paul Heyman was great during this entire feud, but nobody is surprised by that. He’s almost always good.

“Triple H vs. Taker Hell in a Cell.” (@johnnyhockeyjr)

The Hell in a Cell match between The Deadman and Triple H at WrestleMania 28 was billed as the end of an era, and in many ways, it was.

Taker and The Game were two of the last remnants of the Attitude Era and Monday Night Wars. They were two aging warriors in a young man’s game.

The buildup to this bout was surpassed by the match itself because special guest referee Shawn Michaels, Triple H and The Undertaker are master storytellers, especially in big situations like this.

This will be remembered for many years as one of the best performances either Superstar ever had.

According to the comments we received, the most beloved Undertaker match of the B/R wrestling community was his showdown with Shawn Michaels at WrestleMania 25.

This was the first of their two back-to-back ‘Mania bouts, but a lot of people consider this one to be the better of the two despite not having the Streak vs. Career stipulation.

Both men were still capable of performing at a high level at this point in their careers, so they left everything they had in the ring. The fact that they escaped without any major injuries was a miracle.

You could tell they each felt like they had something to prove. While they were already living legends at this point, they wanted the younger generation to know they could still steal the show. They accomplished that goal beautifully.

This is one of my personal favorite TV matches of all time. ‘Taker took Hardy from a midcard tag team wrestler and turned him into a future world champion in one bout.

Hardy was already a popular performer at this point, but few people thought he was a serious contender for the WWE title.

By showing him respect after the match, The Deadman told everyone that The Charismatic Enigma was somebody to keep their eye on. Sure enough, Hardy eventually became a multi-time world champion.

This match doesn’t get talked about enough for how good it was. It took The Phenom out of his element and he still managed to look like a badass.

“My Personal favorite was Batista at WrestleMania 23. Hands down one of my favorite matches ever.” (@jcullinane)

It’s hard to believe this match was over 14 years ago. It doesn’t seem like that long ago since these two were ruling over SmackDown as rivals.

The feud between Undertaker and Batista is what convinced a lot of fans that The Animal deserved to be at the top of the mountain in WWE. He was already a world champion, but The Deadman helped him become a true main event talent.

They came out of the gate hot and made this a hard-hitting fight for the ages. It wasn’t surprising to see more than one person pick this as their favorite.

“Undertaker vs. Ric Flair at WrestleMania 18 is a personal favorite of mine. Underrated match.” (@goose4999)

“Taker vs. Flair at WM18. Heel Taker, crimson mask Flair and the mother of all Arn Anderson spinebusters. What’s not to love?” (@shamablama)

The Undertaker and Ric Flair are two men who spent a couple of decades in the business together without crossing paths too many times, so when they did have a match, it was special.

Their encounter at WrestleMania 18 was overshadowed by The Rock vs. Hulk Hogan, but in many ways, this was the better match.

“Hell in a Cell with Mankind.” (@papa_shango)

This was a classic match, but the fact that your name is Papa Shango and you didn’t pick his match with ‘Taker is a little disappointing.

“When he lost on SmackDown to Vladamir Kozlov.” (@LogieeBearr)

I sometimes look this match up just to make sure it actually happened and wasn’t some weird fever dream. The fact that it was a clean win without Kozlov even using his finisher is what made it so shocking.

People forget that Heidenreich was almost pushed to the main event in WWE. It’s also easy to forget that he was managed by Paul Heyman at the time.

“‘Taker vs. Goldberg at Crown Jewel (Thumbs up emoji).” (@SMACKDOWN1FTW)

Nope. I’m not even going to make a joke about this one. Moving on.

I was nine when this match took place. I didn’t know anything about work rate or storytelling. I just thought it was cool that two giants were fighting like kaiju in the ring. Yes, this match is bad, but a small part of me still enjoys how silly it was.

Honestly, this match is not as horrible as everybody remembers. It’s definitely not good, but it’s not the worst thing in the world. This is another one I saw as a kid and remember liking because it was so ridiculous.

Denial of responsibility! NewsUpdate is an automatic aggregator around the global media. All the content are available free on Internet. We have just arranged it in one platform for educational purpose only. In each content, the hyperlink to the primary source is specified. All trademarks belong to their rightful owners, all materials to their authors. If you are the owner of the content and do not want us to publish your materials on our website, please contact us by email – [email protected]. The content will be deleted within 24 hours.
best sports newscommunityDebatesmatchnews update sportsnewsupdatesports newssports update