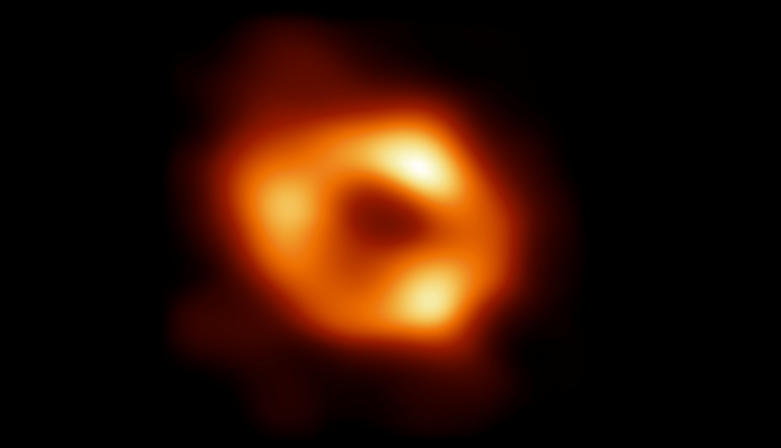 Behold, The First Image Of The Black Hole At The Center Of Our Milky Way Galaxy

Scientists say the black hole is four million times more massive than the Earth’s sun, according to The Associated Press. It is not possible to view the black hole itself, so what you’re seeing in the video and image below is actually the “glowing gas” that surrounds it, astronomers said.

The black hole at the center of the Milky Way was described by the University of Arizona’s Feryal Ozel as a “gentle giant.” Almost all known galaxies have similar black holes at their center, astronomers believe. They capture all light and matter, which is why they are difficult to photograph.

The coordinated effort to capture this image from astronomers around the world carried a cost of $60 million, with $28 million coming from the US National Science Foundation.

In other fun and cool science news, members of the US government will hold a public hearing next week to discuss UFOs in an attempt to “break the cycle of excessing secrecy and speculation.”

Denial of responsibility! NewsUpdate is an automatic aggregator around the global media. All the content are available free on Internet. We have just arranged it in one platform for educational purpose only. In each content, the hyperlink to the primary source is specified. All trademarks belong to their rightful owners, all materials to their authors. If you are the owner of the content and do not want us to publish your materials on our website, please contact us by email – [email protected]. The content will be deleted within 24 hours.
Beholdbest games newsBlackCenterGalaxygame updategames newshole