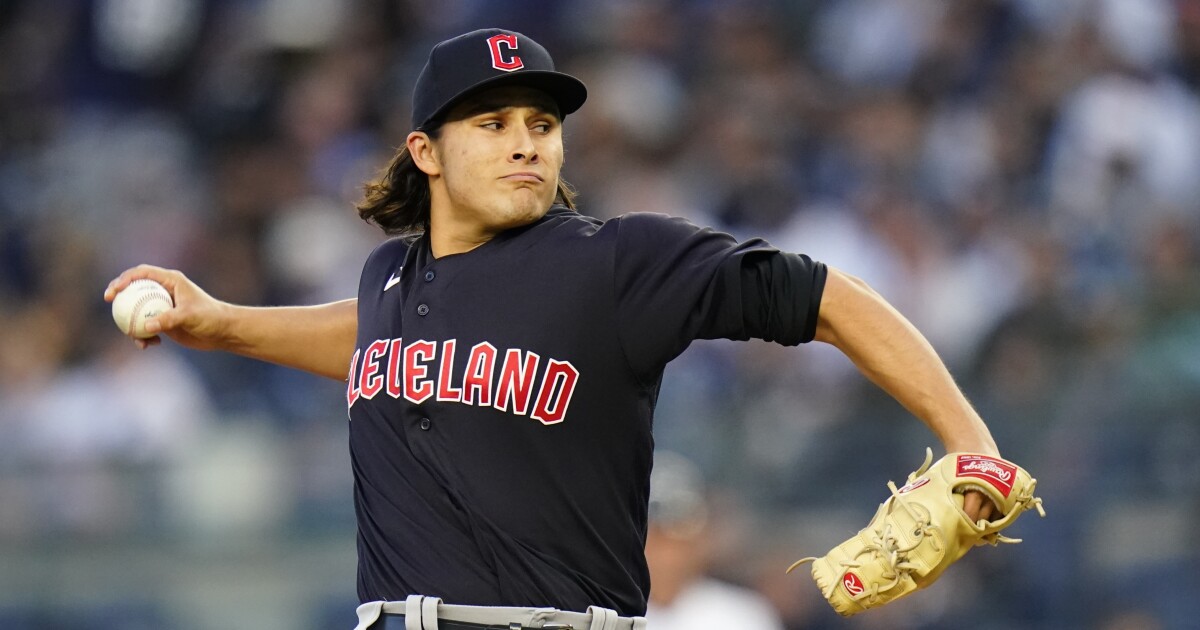 Sometimes it’s all about bloodlines. The first two picks in the MLB draft last week — Jackson Holliday and Druw Jones — are the sons of former major league stars Matt Holliday and Andruw Jones.

Sometimes it’s not. Three major league players in the last 14 years are the sons of former L.A. Times sportswriters.

Sons of MLB players predisposed to crush or throw 90-mph fastballs are no surprise.

Sons of sportswriters adept at doing anything more athletic than dripping mustard on their shirts while gobbling hot dogs and typing at the same time are indeed a surprise.

Except in the cases of Dave Morgan and son Eli, in his second season as a Cleveland Guardians pitcher; Ross Newhan and son David, who logged eight big league seasons with five teams; and Fernando Dominguez and son Matt, a first-round pick out of Chatsworth High who hit 42 home runs in 362 big league games.

Dave Morgan spent the first 20 years of his career as a Times writer and editor, ascending to deputy sports editor before leaving for executive positions at Yahoo Sports, the USA Today Sports Media Group, and Bally Sports.

Ross Newhan was a national baseball columnist who covered the Angels and Dodgers for The Times from 1968 to 2004, and was inducted into the writers’ wing of the Hall of Fame in Cooperstown, N.Y., in 2001.

Fernando Dominguez was a decorated writer and copy editor in The Times’ sports department from 1990 until retiring in 2020, a native of Cuba whose love of baseball made him a go-to editor for Dodgers and Angels stories on deadline.

Every sportswriter probably dreamed of being a professional athlete long before they picked up a pen and notepad. Not many dared dream that their son would play in the big leagues.

And all with the same publication? Rare, rarer, and rarest.

Dave and Eli Morgan were at Dodger Stadium together on Father’s Day last month just as they had been often over the years. The difference was that Eli was pitching.

A setup reliever in his second year with the Guardians, Eli tossed 1 2/3 scoreless innings against the Dodgers, whittling his ERA to 1.62. He entered with one out in the seventh and struck out Gavin Lux and Freddie Freeman. In the eighth he followed a walk to Will Smith by retiring three batters in a row. The Guardians took the lead in the ninth and Eli got the win.

It was a surreal experience for father and son.

“He’d take me to games growing up, Angels games, Dodgers, Lakers,” Eli said. “It’s always been a big bonding thing with my dad.”

Dave and his wife, Diana, frequently traveled to watch Eli pitch when he attended Gonzaga after graduating from Palos Verdes Peninsula High in 2014. He was an eighth-round draft pick in 2017 and ascended rapidly through the minors.

“They both have so many miles under their belt,” Eli said. “They came to a ton of my college games, a ton of my minor league games.”

Eli became aware of his father’s stature in sports journalism when BusinessWeek named Dave one of the 100 Most Influential People in Sports in 2008.

“He was more behind the scenes as an editor and executive, but it was super cool for our family to see him get that recognition,” Eli said. “It meant a lot to us and I’m sure it meant a lot to him too.”

All three journalists missed countless chances to see their son’s games because they were writing or editing stories about other people’s sons.

David Newhan made his debut in 1999 with the San Diego Padres but had bounced around several organizations and couldn’t seem to get out of triple A until the Baltimore Orioles called him up June 18, 2004.

Ross was working at Dodger Stadium that evening and following the Orioles game against the Colorado Rockies on his laptop. David pinch-hit in the ninth inning and hit a home run.

For one glorious moment in the career of a Hall of Fame baseball writer, Ross Newhan allowed himself a shriek of delight in the press box.

“I could only see the box score,” Ross said. “Here’s the pitch, the ball is in play and the next thing I see is HR. I let out a cheer. [Times writer] Bill Shaikin was sitting next to me and he never has let me forget that.”

Matt Dominguez was the Houston Astros’ third baseman during a series at Angel Stadium in August 2013. He secured nearly 100 tickets for family and friends, then went eight for 14 with two home runs in the three games.

Fernando took time off to attend the games Friday and Saturday. The series finale Sunday had a 12:30 p.m. start, so he stayed through six innings before leaving to make it to Times Mirror Square in downtown L.A. to begin his editing shift at 3 p.m.

“I remember turning the radio on in the car just before he homered,” Fernando said.

The three-run blast in the seventh inning was Matt’s career-high fourth hit of the game and gave the Astros a lead they didn’t relinquish.

It wasn’t the first time Fernando missed a game-winning home run by his son. Matt played for the U.S. junior national team in the 2006 world championships at age 16. Cuba hosted the tournament and it was played in the same town, Morón, where Fernando grew up.

“It was a weird feeling to go there and drive the streets where my dad was born and raised,” Matt said. “He’d told me Morón is known for a big rooster statue, and there it was!”

Cousins he’d never met came to the semifinal game between the U.S. and Cuba. Fernando and his wife, Cindy, were following the action on the internet when early in the game the connection dropped.

The game was scoreless until the seventh inning when Matt hit a three-run home run. The U.S. won 4-0. Fernando had to wait until the next day to read Cuban newspaper accounts of the game in Spanish.

“That’s how it went for most of his career,” Fernando said. “I’d be at work, following his game online with one tab open and editing a story with another.”

Being a ballplayer at the highest level isn’t all glitter and glory. Sportswriters are attuned to the arduous path from youth ball to the major leagues, the game’s inherent failures and daily repetitive grind even the best players endure.

Newhan, Dominguez and Morgan lived through it all.

In a Father’s Day column in 2004 a few days after David’s home run against the Rockies, Ross wrote about David’s “baseball odyssey that has taught him there are no guarantees and little you can believe in besides yourself, even when it involves your father’s profession.”

Injuries cost David two seasons just as he was becoming an established major leaguer. He battled back and became a valuable utility player with the Orioles, Mets and Astros before retiring in 2011 at age 34.

Fernando wrote a column after Matt’s major league debut in 2011 and described the experience from a parent’s perspective: “That night, it was hard to fall asleep as images of Matt’s baseball journey raced through my mind: The countless hours spent on youth fields and in batting cages, the miles put on our cars driving to tournaments, the games played in dust bowls with insane early-morning or late-night start times.”

Ross and Fernando wrote about their sons reluctantly. They weren’t boastful and made certain the stories conveyed the challenges their sons faced that only became more pronounced when they reached the big leagues.

“Baseball is a tough one, it wears on you,” Matt said. “My dad understood that baseball is every single day. He’d want to say things to me when I was in a slump, but baseball can beat you down more mentally than physically. He knew when to say things and when not to say things.”

Eli was independent early on. As a high school senior he spurned a scholarship offer from nearby Chapman University and negotiated a preferred walk-on deal with Gonzaga without input from his parents.

“He’s not calling me to figure things out,” Dave said.

One of Dave’s proudest moments came at a dinner after Eli was shelled for six runs in 2 2/3 innings during his debut May 28, 2021, on a rainy night in Cleveland.

“As disappointed as Eli was with the result, he put that aside and made sure to enjoy the moment with his family and friends,” Dave said.

David Newhan is experiencing what his dad did years ago. No, he’s not a Times sportswriter, but he does have a son who aspires to play baseball at the next level. Nico Newhan batted .530 and led the state with 61 hits as a junior last season at San Diego Maranatha Christian Academy. Ross and his wife, Connie, rarely miss a game.

David, 48, was a batting coach with the Detroit Tigers in 2015-16 and later a minor league coach with the Angels and Pirates. Nico shagged flies during batting practice at Comerica Park and spent time in clubhouses much like his dad did as a teen.

When Ross covered the Angels decades ago, David was welcome in the clubhouse and on the field during spring training. Jimmie Reese hit him fungoes. Reggie Jackson gave him a bat.

“That’s when I decided, this is what I want to do,” David said. “Everything has changed now. As a writer’s kid, that’s not happening anymore.”

When Fernando retired two years ago, he and his wife, Cindy, moved from L.A. to the Phoenix area, buying a house around the corner from where Matt, 32, lives with his wife, Brittany, and two young children.

Eli, 26, is single and singularly focused on helping the Guardians win. He throws one of baseball’s most effective changeups and has become a bullpen mainstay after making 18 starts as a rookie last season.

He never wanted to be a sportswriter. Neither did Matt or David, who might have put it most succinctly when he was still a player.

“Playing seemed a lot more fun than writing,” David said. “My dad writes at home, and one thing I’ve seen a lot of is him cussing up a storm, yelling at the laptop. I understand what a sportswriter goes through.”

Denial of responsibility! NewsUpdate is an automatic aggregator around the global media. All the content are available free on Internet. We have just arranged it in one platform for educational purpose only. In each content, the hyperlink to the primary source is specified. All trademarks belong to their rightful owners, all materials to their authors. If you are the owner of the content and do not want us to publish your materials on our website, please contact us by email – [email protected]. The content will be deleted within 24 hours.
Baseballbest sports newsL.ALeagueMajornews update sportsnewsupdateraised

Explained: What are IP ratings in smartphones and earphones, and how are they calculated- Technology News, Firstpost

How to manipulate implicit measures in Power BI Desktop