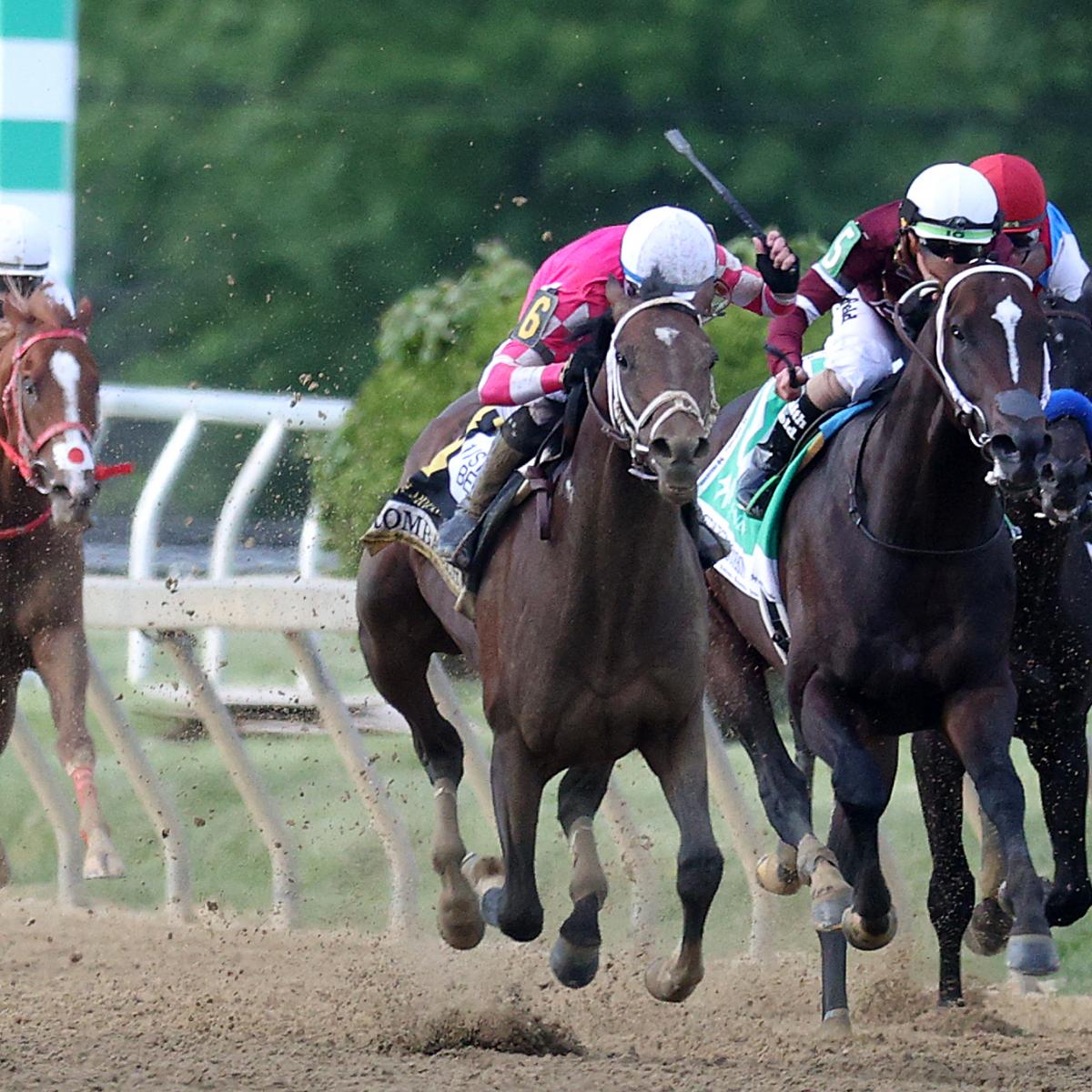 The 153rd running of the Belmont Stakes is set to take place Saturday in Elmont, New York, and will feature Preakness Stakes winner Rombauer and seven other horses running for a $1.5 million purse.

There’s no shot at a Triple Crown this year. Medina Spirit’s second drug test came back positive for the same banned substance as the first, setting up Mandaloun to be the official winner of the Derby, but neither will be in the field at the Belmont.

Instead, Rombauer will face a field of eight, including a foreign runner, multiple graded stakes winners and a few Kentucky Derby entrants.

It’s still a race with plenty of intrigue and high stakes. The odds indicate a race with multiple contenders who could pull off the win, so a tight race should be expected over the one-and-a-half-mile “Test of the Champion.”

Here’s a look at all the info you need to catch the race as well as the biggest storylines heading into the Belmont.

Rombauer was a surprise winner at the Preakness. He was 12-1 on the morning line and hadn’t done much to have better odds than that. But he showed plenty of closing speed and had a great trip to win the shortest of the Triple Crown races.

He certainly isn’t sneaking up on anyone in this race, but a Rombauer win would still be surprising for a few reasons.

It’s fair to wonder how Rombauer’s deep closing running style will do on Big Sandy. At the Preakness, he was able to hang well behind from the pace before charging by the pack at the end and taking the win.

Such a strategy is actually harder to execute on the longer track. If the pace gets too far ahead, it’s easier to let the lead become insurmountable. Then there’s the question of his pedigree. His sire, Twirling Candy, was a sprinter and never won a graded stakes race beyond 1 ⅛ mile.

That could play a factor in whether Rombauer is prepared to go the distance as a closer who will likely have to make up ground while being tested down the backstretch.

It’s not uncommon for a horse to skip the Preakness after a failed attempt to win the Kentucky Derby. With a Triple Crown out of reach, it makes sense to rest up and prepare for the lengthy Belmont.

Hot Rod Charlie, Essential Quality, Known Agenda, Bourbonic and Rock Your World all fit the profile. Each raced at Churchill Downs with varying degrees of success before skipping the Preakness and now has just one more opportunity to add an American Classic to their resume.

Hot Rod Charlie can claim the most success in Kentucky. The Doug O’Neill trainee was third under the Twin Spires and posted an impressive 109 Equibase speed figure. He’s been incredibly consistent, finishing in the top three in all of his 2021 starts and six of eight for his career.

Essential Quality has the most to prove. He came into the Derby as the odds-on favorite after being named the two-year-old champion in 2020 but finished fourth behind Medina Spirit, Mandaloun and Hot Rod Charlie.

At his best, the gray colt likes to stalk the pace and make a push at the end. If he gets a good trip, he could make up for his Derby disappointment.

Known Agenda, Bourbonic and Rock Your World all finished lower than eighth place in the 20-horse field at the Derby. They are considered longshots, but plenty of longshots have wound up winning the Belmont before, so they are worth keeping an eye on.

The Belmont has a tendency to produce some surprise winners. As America’s Best Racing‘s J. Keeler Johnson noted, seven of the past 13 Belmont winners went off at 11-1 odds or worse. Meanwhile, only three favorites have won the race in 15 years.

That’s not to say either of them will win the race, but it is a trend worth monitoring.

France de Go Ina is the biggest longshot. He made his first start in America at the Preakness and was right behind the pace before falling to seventh in the 1 3/16-mile race. That doesn’t bode well for the distance at the Belmont.

Overtook, though, looks a bit better on paper. Pletcher is a big reason for that. He’s won the race three times, including with a sizeable underdog in Palace Malice. Perhaps more importantly, Overtook shares a sire with Palace Malice. Curlin sired the Belmont winner, Overtook and fellow Belmont runner Known Agenda.

His resume isn’t that great. He’s only run twice in 2021, most recently placing third in the Grade 3 Peter Pan Stakes. But his lack of activity could work in his favor as he should be fresh and could have potential we haven’t seen.

A wager on Overtook could be quite lucrative for those willing to back a horse with few credentials.

Denial of responsibility! NewsUpdate is an automatic aggregator around the global media. All the content are available free on Internet. We have just arranged it in one platform for educational purpose only. In each content, the hyperlink to the primary source is specified. All trademarks belong to their rightful owners, all materials to their authors. If you are the owner of the content and do not want us to publish your materials on our website, please contact us by email – [email protected]. The content will be deleted within 24 hours.
Loading...
Belmontbest sports newscoverageFullInfonews update sportsnewsupdatepositions

French Open: One of the best set of clay-court season, says Rafael Nadal after win against Richard ​Gasquet