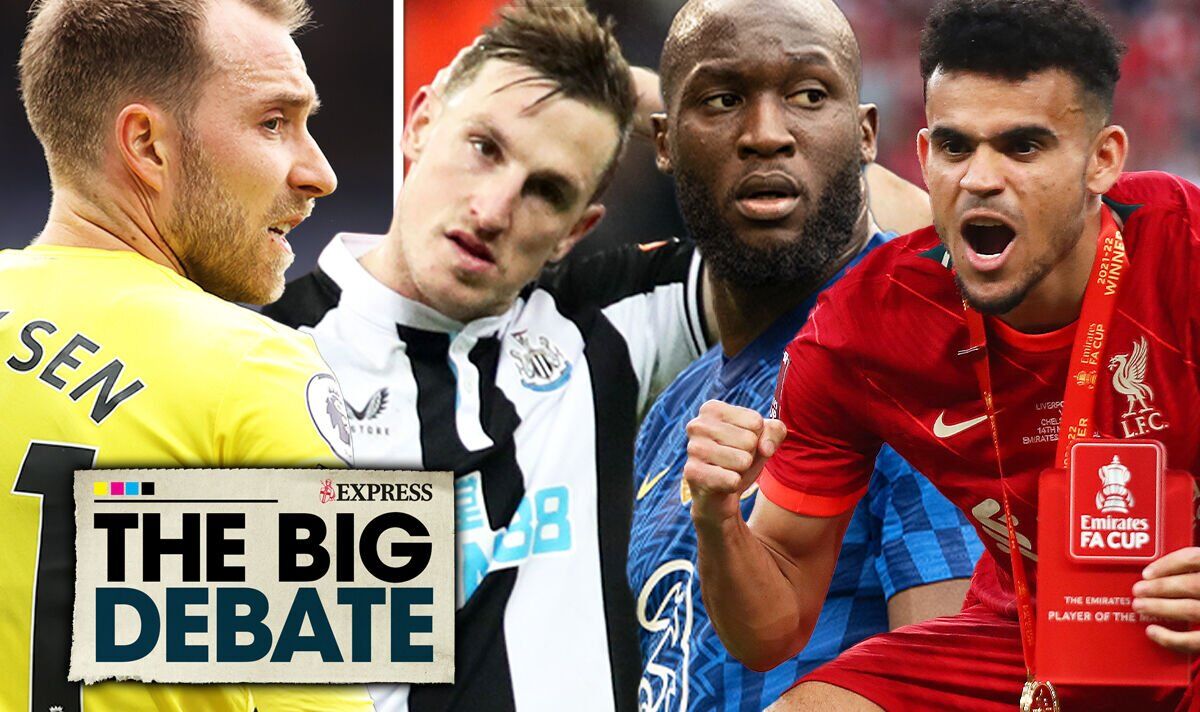 The 2021-22 Premier League campaign is drawing to its conclusion ahead of what could be a thrilling final day of action. There is still plenty to sort out in the title race, the fight for Champions League and Europa League spots and the battle to avoid relegation.

After a brief holiday, clubs will then quickly turn their attentions towards the transfer market as they look to bolster their squads ahead of next season. In the last year or so we have seen plenty of inspired signings, but also some that simply have not worked out. Here, Express Sport reporters nominate their best and worst transfer from the last 12 or so months…

BEST: Christian Eriksen (Brentford, free) – No debate. Brentford have picked up 22 points from Eriksen’s nine starts this season. If he’d started every game, at that rate the Bees would be top of the table. Top. The head says signing of the season, not the heart.

WORST: Romelu Lukaku (Chelsea, £97.5m) – He has begged all his career to be given a serious chance in the Premier League and this was it. Just eight goals, though, after talking himself out of the team on Italian television just when he was reaching full fitness.

There have been plenty of hits and misses in the Premier League (Image: Getty)

BEST: Christian Eriksen – Many signings improve a team but not many make every sports fan feel better about life. Eriksen’s return to elite football after his near-death experience at the Euros did that.

WORST: Romelu Lukaku – At £97.5m the Belgian has been an expensive misfit at Chelsea, a square peg in a round hole and a source of intense irritation for Thomas Tuchel.

BEST: Cristian Romero (Tottenham, £42m) – While the likes of Eriksen and Luis Diaz have shone since January, Romero has been a stand-out figure all season other than his spell on the sidelines with injury. The Argentine centre-back has completely transformed Spurs’ back-line, and is well on his way to becoming their Virgil van Dijk. A Rolls Royce of a player.

WORST: Dele Alli and Donny van de Beek (free, loan) – When Everton’s backs were against the wall in the winter, they needed shrewd, sensible investment to steer them away from trouble. What they didn’t need were two luxury, out-of-form players who clearly didn’t have the stomach for a relegation battle. The Toffees are extremely lucky to be staying up – and it’s been no thanks to Dele or Van de Beek.

BEST: Christian Eriksen – In hindsight it seems shocking that Brentford were one of the only teams willing to take a punt on a free transfer for the Dane after his cardiac arrest at Euro 2020. With Tottenham and Inter Milan on his CV, it is thoroughly unsurprising that he is a cut above the rest in west London, where he has played a large part in their surge up the table.

WORST: Chris Wood (Newcastle, £25m) – I’m proud to have been part of the minority who watched on puzzled while the whole world raved about Newcastle’s £25million swoop for Chris Wood. The concept of weakening relegation rivals was completely wiped out when Burnley signed Wout Weghorst, who is arguably a better footballer, for half the price, and Wood’s strike-rate on Tyneside has been atrocious.

BEST: Luis Diaz (Liverpool, £37m) – The biggest compliment you could aim at the Colombian is that Liverpool would now worry far less if they lost Mohamed Salah or Sadio Mane. Diaz has been the Reds’ best player since his January transfer from Porto, and has already scored several important goals. The 25-year-old will be among the Premier League’s top stars in 2022-23.

WORST: Tammy Abraham (Chelsea to Roma, £35m) – Hindsight is of course a wonderful thing, but Chelsea’s decision to accept £35m for Abraham and spend almost £100m on Lukaku looked worse as the season continued. The England striker ended up scoring 29 goals for Roma and the Three Lions in 2021-22 – and would surely have contributed plenty in a Blues shirt.

BEST: Christian Eriksen – I know Luis Diaz, Cristiano Ronaldo and Conor Gallagher all deserve plaudits. But it’s nearly a year since Eriksen collapsed at the European Championships, with everybody fearing the worst. So to see him even on the pitch is a miracle by itself. Then there’s the performances themselves. The former Tottenham star has been back to his best and oozed class throughout. Brentford staying up has a lot to do with Eriksen and, now, it’ll be fascinating to see what he decides to do with his future this summer.

WORST: Romelu Lukaku – On his day, Romelu Lukaku can be outstanding. But he’s been a major, major disappointment since leaving Inter Milan for Chelsea back in the summer. Eight Premier League goals is nowhere near good enough, he’s had his issues with Thomas Tuchel and, as the campaign has gone on, has looked increasingly frustrated. Lukaku may need to return to Italy if he’s to become the blockbuster asset Chelsea thought he would be when he touched down at Stamford Bridge for a second time.

BEST: Luis Diaz – Diaz has been the latest example of Liverpool’s incredible recruitment in recent years. Every player added to Jurgen Klopp’s squad looks like they’ve been in it for years, which is a credit to the club’s data-driven transfer strategy. Simply put, Liverpool wouldn’t be vying for the quadruple if Diaz hadn’t arrived in January. He has boosted the Reds’ attacking depth that much. Even if his initial £37m fee rises to £49m, he’d still represent a bargain.

WORST: Chris Wood – The New Zealand international’s £25m release clause was always a hefty fee and a sign of Newcastle’s desperation for a striker in January. He does a good job occupying defences, but he’s scored twice in 15 games and will likely fall down the pecking order when another goalscorer arrives this summer.

Jack Grealish has not justified his price tag (Image: Getty)

BEST: Dan Burn (Newcastle, £13m) – He will not be the most glamorous or exciting name on the list but the giant centre back has been a wonderful signing for Newcastle this season. He has formed a strong partnership with Fabian Schar that has been the cornerstone of the Magpies excellent second half to the season. A solid, reliable presence, he has relished being back at his boyhood club, disproving anyone who felt he would just be a short term fix.

WORST: Jack Grealish (Man City, £100m) – It is perhaps unfair on Grealish personally – but the transfer must be considered for its long-term thinking and price tag. It is unclear where the £100 million Englishman fits within the Manchester City system and he appears to be the least favoured of all their attackers. The England international has been unable to replicate his form from Aston Villa, unsuited to a situation where he is a cog in an exceptional team rather than the main man.

Denial of responsibility! NewsUpdate is an automatic aggregator around the global media. All the content are available free on Internet. We have just arranged it in one platform for educational purpose only. In each content, the hyperlink to the primary source is specified. All trademarks belong to their rightful owners, all materials to their authors. If you are the owner of the content and do not want us to publish your materials on our website, please contact us by email – [email protected]. The content will be deleted within 24 hours.
best sports newsbigdebateDiazLeagueLukakunews update sportsnewsupdate