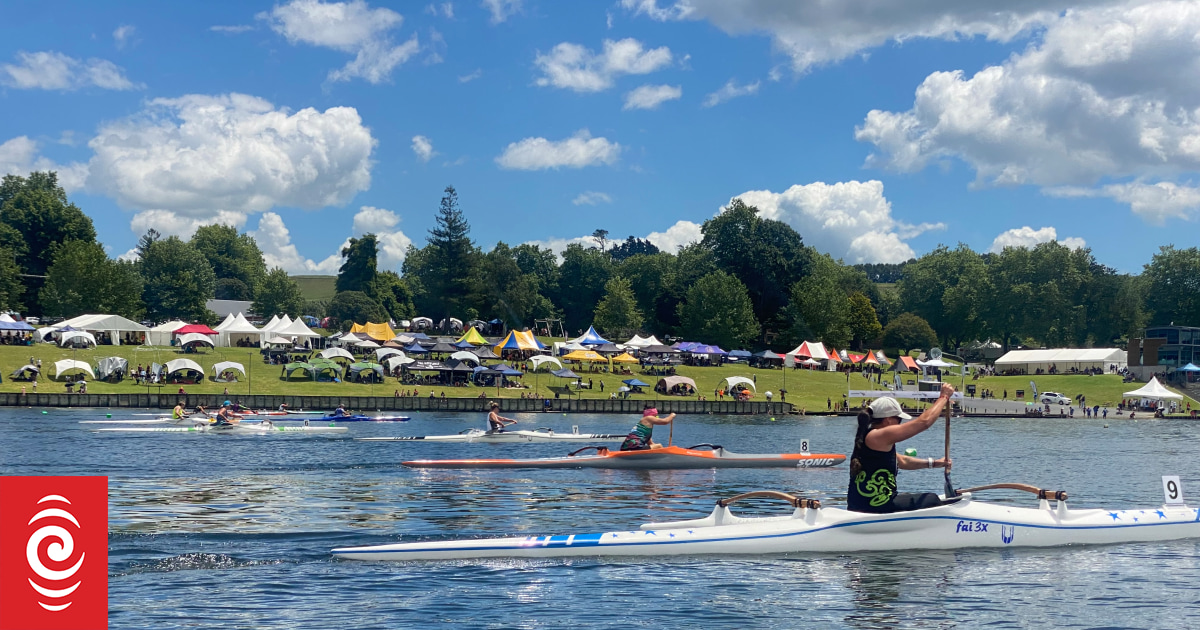 The final day of the Waka Ama National Sprint Championships is seeing the best teams in the country aiming for gold in the semifinals and finals of the W6 races.

One of the most exciting races today includes the W6 Men’s premier 500-metre sprint against Auckland-based club Pineula going up against Nga Hoe Horo.

He beat multi-winner world champion Tupu King who is also a member of Nga Hoe Horo.

Horouta from Tairāwhiti is the other club to watch out for after the National Hauora Premier Women’s W12 team managed to win gold yesterday in their 500-metre sprint.

Their J19 team also won in their final 500-metre sprint against Pineula.

“We have an expectation in our crew, we’ve dominated grade for the last 12 years and clean sweeps most of the events every year. So we have a stronghold in that division and we weren’t about to let it go,” she said.

Campbell also coached New Zealand’s women’s elite team that travelled to London last year to compete in the Waka Ama World Sprint Championships, and was the steerer for the team.

This year is the first time she hasn’t competed in the W1 singles.

“I didn’t enter the W1 event. It’s an event that I’ve been racing in for many years, I’ve been in the sport over 24 years. So it was a different space to be in to [be] supporting everybody and helping where I could.”

She said some of her biggest competition is Auckland and Manu’z & Jemima’z from Napier-based club Haeata.

“Both teams are prominent, and we are having some good scraps out there. So we enjoy racing them year-in, year-out,” said Campbell.

Their competitors Haeata, who won silver in the W12, are also competing in the W6 Master Women’s W6 500 and 1000 metre sprints today, where they’ll once again go up against Horouta.

Team member Nicky Kingi, who won gold in the Senior Masters 500 Metre Sprint, said despite being in a tough division, the team would give it their all.

“We haven’t got the fastest times by any means, but we’re definitely prepared to give it a good crack. We haven’t trained together because we’re all from different towns and what-not. And through Christmas, it’s quite challenging to get together. So we’re just gonna go out there and give it what we’ve got on on race time,” said Kingi.

But team member Corina Gage said the team had been focusing on the Waka Ama Long Distance World Championships later this year more than the W6s.

“You have to prioritise at some point and so we’re happy to be participating. And knowing that we’re unlikely to be in the medals in our W6 and investing in winning at long-distance nationals,” Gage said.

She said the team planned on winning both spots for the Master Women’s 50s and 60s.

Denial of responsibility! NewsUpdate is an automatic aggregator around the global media. All the content are available free on Internet. We have just arranged it in one platform for educational purpose only. In each content, the hyperlink to the primary source is specified. All trademarks belong to their rightful owners, all materials to their authors. If you are the owner of the content and do not want us to publish your materials on our website, please contact us by email – [email protected]. The content will be deleted within 24 hours.
AMAAudiobest sports newsbigChampionshipsCurrent AffairsDayfinal