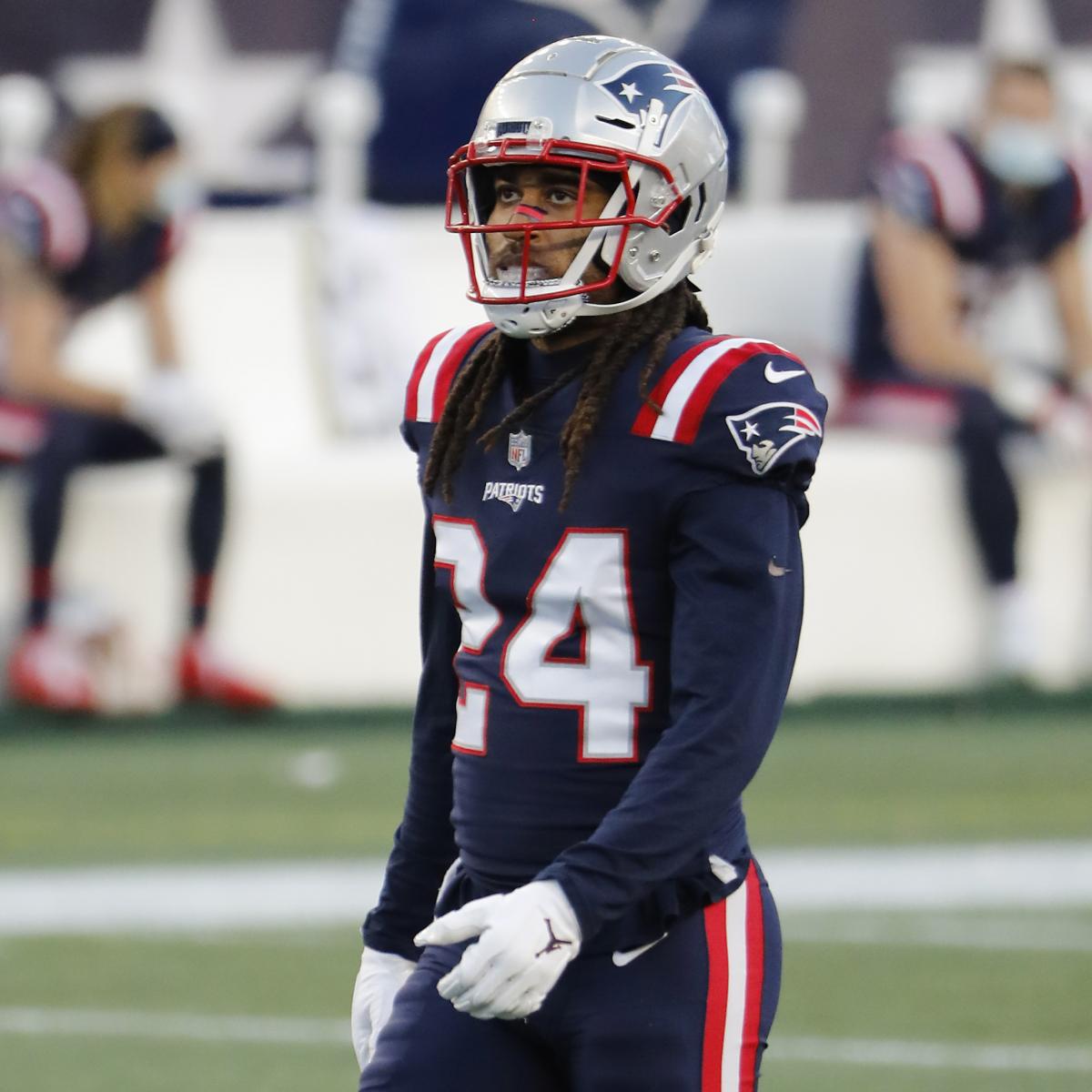 We’ve reached the point in the NFL calendar when player movement returns to the forefront. Teams now have a better idea of what they’re going to be in 2021, and the Nov. 2 trade deadline is looming.

On Wednesday morning, the New England Patriots reportedly planned to release star cornerback Stephon Gilmore, according to ESPN’s Adam Schefter. But life moves quickly in the NFL, and within hours, the Patriots instead traded Gilmore to the Carolina Panthers in exchange for a 2023 sixth-round pick.

This isn’t likely to be the last big deal to occur between now and the trade deadline, either.

Here, we’ll examine six noteworthy trades that could still happen within the next few weeks. Factors like contract status, cap space, team needs and past production were all considered here, along with any relevant trade buzz.

While these are very much hypothetical deals, we’re staying within the realm of realism here.

This potential deal hinges on the idea that the Houston Texans are tanking for the top pick in the 2022 draft. But even if the Texans aren’t actively trying to lose games, they aren’t likely to win many this season, either.

Wideout Brandin Cooks is one of the few players who could bring them value in return.

Cooks has been the lone bright spot in Houston’s offense. He leads the team with 369 receiving yards, while no other player has more than 73. Cooks will also be a free agent after the 2022 season, so he’ll likely leave before Houston is relevant again.

And while trading a player of Cooks’ caliber may seem outlandish, it isn’t. He’s been traded three times since 2017 alone.

The Cleveland Browns are trying to win now, but they have some serious issues at receiver. Jarvis Landry is on injured reserve, and Odell Beckham Jr. still seemingly hasn’t established chemistry with quarterback Baker Mayfield.

Cooks would give Cleveland a wideout who’s been productive regardless of his quarterback, while Houston could add more draft capital for its ongoing rebuild.

With Stephen Gilmore headed to Carolina, the Kansas City Chiefs are down one option when it comes to addressing their defensive needs. That’s unfortunate, because their defense—ranked 27th against the pass, 31st overall and 31st in points allowed—has been terrible.

And Kansas City was reportedly interested in acquiring Gilmore.

“I’m told the Chiefs have interest in Stephon Gilmore but financial constraints could be an issue here,” Matt Verderame of FanSided tweeted earlier Wednesday. “KC doesn’t have much money to play with.”

The Chiefs could instead turn their attention to Minnesota Vikings cornerback Cameron Dantzler, a 2020 third-round pick who has fallen out of favor in Minnesota because of his lack of special teams value.

After starting in 10 of his 11 appearances last year, Dantzler has played only 34 percent of the defensive snaps this season. He’s been strong in coverage, though, allowing an opposing passer rating of only 41.7.

Kansas City could get a defensive boost with a player who’s still on his rookie contract, while Minnesota would get something back for someone whose long-term future is cloudy at best.

The Cleveland Browns don’t just have receiver issues. They also have problems at left tackle.

Starter Jedrick Wills Jr. has been dealing with an ankle injury and has repeatedly come off the field this season. His Week 4 replacement, rookie James Hudson III, didn’t exactly earn a ringing endorsement.

“I think he was OK,” head coach Kevin Stefanski told reporters Monday. “He had a false start penalty there. He is getting better.”

Cleveland could add another insurance policy by trading for 2019 first-round pick Andre Dillard. While the Philadelphia Eagles are dealing with multiple injuries along the offensive line—Dillard has started two games this season because starting left tackle Jordan Mailata (knee) has been out—he might be available.

Sports Illustrated‘s Albert Breer reported before the season that Philadelphia was “taking calls” about trading offensive linemen. Dillard, who will likely head back to the bench upon Mailata’s return, would be a logical trade candidate.

While Dillard has not developed into a reliable starter for Philadelphia, a change of scenery and some time with respected line coach Bill Callahan might help him turn his career around.

While the Chicago Bears have had their fair share of early issues, they’re only one game out of first place in the NFC North. Unfortunately, they’ll be without starting running back David Montgomery for the next month.

According to ESPN’s Dan Graziano, Montgomery is expected to be sidelined by a knee sprain for “four to five weeks.”

If the Bears are looking to help fill the void, the Indianapolis Colts may be willing to help. Indianapolis has a former 1,000-yard rusher in Marlon Mack who has played sparingly this season.

With Jonathan Taylor, Nyheim Hines and Jordan Wilkins also on the roster, the Colts are looking to trade Mack, according to ESPN’s Adam Schefter. Mack did have 10 carries in Week 4, but he was inactive the previous week, in part because Indianapolis was shopping him.

Mack could pair with Bears backup Damien Williams to form a quality tandem while Montgomery is on the mend. The Colts shouldn’t expect a ton in return for Mack, but it would behoove them to get something for someone who’s played only 13 percent of their offensive snaps this season.

The Tennessee Titans’ loss to the previously winless New York Jets showed that star running back Derrick Henry alone cannot carry this team. With receivers A.J. Brown and Julio Jones both sidelined, quarterback Ryan Tannehill went only 30-of-49 for 298 yards and one touchdown.

Tannehill’s passer rating has dipped by nearly 20 points from last season. Part of the issue may be that reliable checkdown option Jonnu Smith is no longer at tight end. MyCole Pruitt leads Tennessee tight ends with a mere 64 receiving yards.

The Titans could look to bolster their tight end room by snagging a recent first-round pick who barely has a role with his current team. 2017 first-rounder David Njoku had a strong sophomore campaign (639 yards, four touchdowns), but he has taken a back seat to Austin Hooper since last offseason.

Even with Landry out of the lineup, Njoku’s opportunities as a receiver have been few and far between. He has only seven receptions and 111 yards on the year.

If Cleveland isn’t going to use Njoku, Tennessee could. The Titans might even be willing to give up their own seldom-used pass-catcher as part of the deal.

Josh Reynolds saw had six catches for 59 yards with Jones and Brown out in Week 4. Those are his only catches of the season.

While the Bears could still make a playoff run, they aren’t going to challenge for a championship in 2021. That means they should focus on getting something in return for standout receiver Allen Robinson II.

Robinson is playing on the franchise tag and could easily depart in the offseason. While he was a 1,250-yard receiver last year, he no longer appears to be the future at the position in Chicago. That role belongs to second-year man Darnell Mooney.

While Robinson saw 13 targets over the last three weeks, Mooney saw 19 targets. Mooney has also surpassed Robinson as the most productive wideout on Chicago’s roster. He has 17 receptions and 226 yards on the season, while Robinson has 13 receptions and 149 yards.

Meanwhile, the Philadelphia Eagles could be interested in adding a receiver of Robinson’s caliber to help develop second-year quarterback Jalen Hurts.

Philadelphia is getting solid production out of 2021 first-round pick DeVonta Smith and 2020 sixth-round pick Quez Watkins, but 2020 first-rounder Jalen Reagor continues to underwhelm for the Eagles. Flipping him for Robinson and a late-round pick could help them recoup value in case he winds up being a bust.

Denial of responsibility! NewsUpdate is an automatic aggregator around the global media. All the content are available free on Internet. We have just arranged it in one platform for educational purpose only. In each content, the hyperlink to the primary source is specified. All trademarks belong to their rightful owners, all materials to their authors. If you are the owner of the content and do not want us to publish your materials on our website, please contact us by email – [email protected]. The content will be deleted within 24 hours.
best sports newsbiggestdealGilmorehappennews update sportsnewsupdateNFL

NBA season preview: How big of a concern is age for the Lakers?