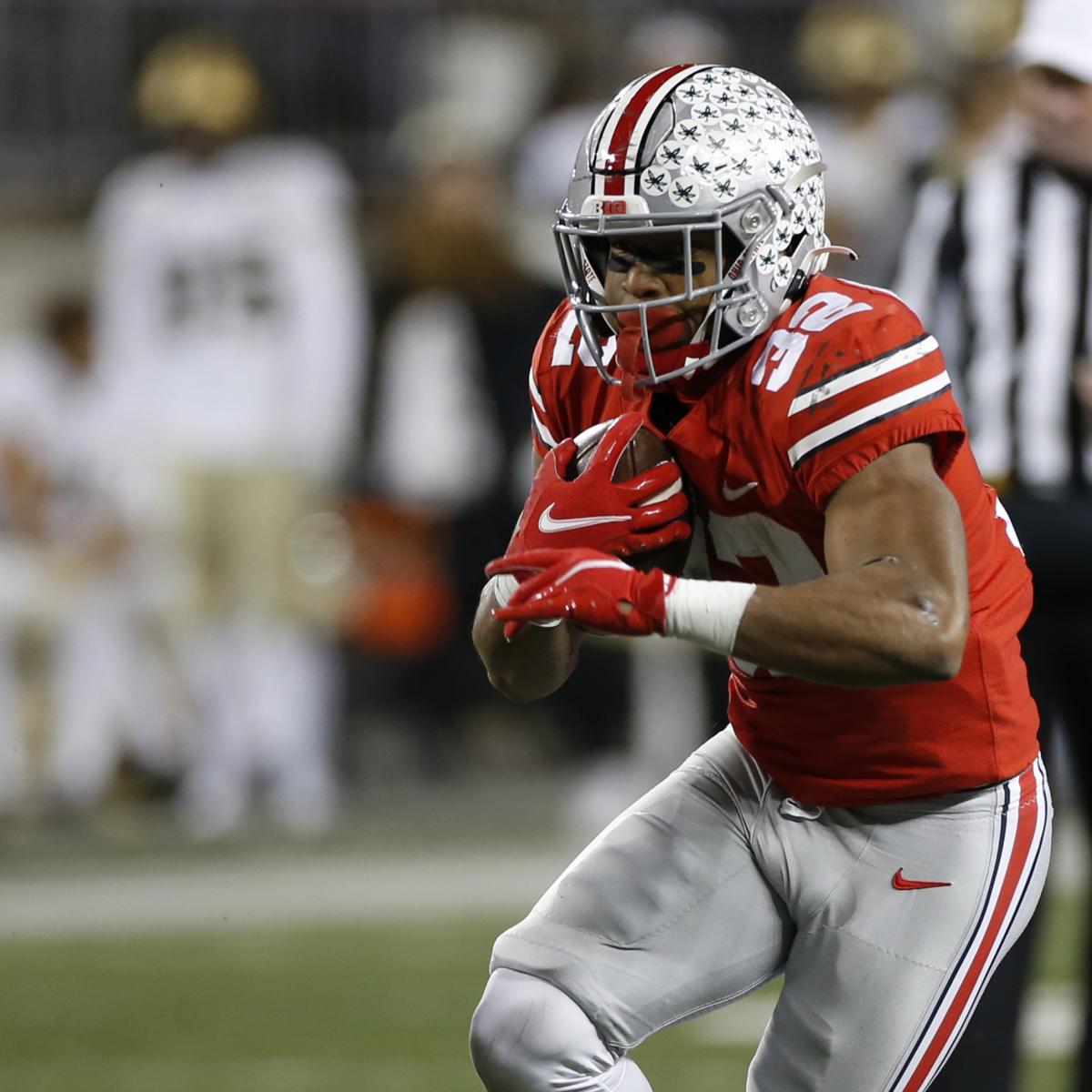 The next three weeks of the college football season will go a long way in determining the College Football Playoff picture.

It is the best possible scenario for college football fans that a handful of games will be deemed as de facto quarterfinal games and they will eliminate a handful of contenders.

Saturday’s Big Ten clash between the Ohio State Buckeyes and Michigan State Spartans opens up a difficult three-week stretch for whichever team emerges out of the Big Ten East.

Ohio State is the favored side to come out of the Big Ten right now. The Buckeyes are the highest-ranked Big Ten side in the CFB playoff rankings.

The ACC, Big 12, Pac-12 and SEC could all have games that affect at least the race to get into New Year’s Six bowls.

Depending on how the results fall, the Big 12 and ACC could sneak their conference champions into the national semifinals, but that requires a ton of help.

The national semifinals could feature two rematches, one from last bowl season and one from September.

The Georgia Bulldogs and Cincinnati Bearcats played each other in the 2021 Peach Bowl. Cincinnati hung in the game, but the SEC East side ended up winning 24-21.

Georgia is far more dominant than it was last season, especially on the defensive side of the ball.

Kirby Smart’s team has not allowed more than 17 points in a single game this season, and it is on track to land the No. 1 overall seed in the playoff.

Georgia’s biggest threat left is the Alabama Crimson Tide, who can win the SEC West even if it loses one of its next two games.

Alabama’s defense has not been as impressive as Georgia’s unit. The Crimson Tide allowed 50 points to their two Top 25 opponents, and they let up 65 points to the Texas A&M Aggies and Tennessee Volunteers, who were both unranked at the time of those meetings.

If Georgia shuts down Alabama, like it has every other SEC team, it will land the No. 1 seed as the best undefeated team in the FBS.

Cincinnati is the second-best team without a loss in the FBS. The Bearcats need to win out to make the playoff because of how the selection committee views Group of Five teams.

Luke Fickell’s team played solid defense in its first 10 games, but it needs to sharpen up its skills to deal with the high-powered offenses of the SMU Mustangs and the Houston Cougars. Cincinnati plays SMU on Saturday and it will likely face Houston in the American Athletic Conference Championship Game.

Cincinnati held eight of its 10 opponents to 21 points or fewer. It has scored at least 24 points in all of its victories.

If the Bearcats turn in a few strong defensive performances, they should land in the top four. Two-loss Alabama would fall out if it loses to Georgia.

Cincinnati’s worst-case scenario is for Alabama to win the SEC Championship Game. If that happens, the Bearcats could be squeezed out by two SEC programs.

The Big Ten and Pac-12 champions typically meet in the Rose Bowl on New Year’s Day, but the location of this year’s meeting will change.

Ohio State and Oregon are both in line for playoff berths and a trip to either the Cotton Bowl or Orange Bowl on New Year’s Eve.

The Ducks won the first meeting of the season with the Buckeyes. That is the result that props up Oregon’s otherwise lackluster resume.

Oregon can add another Top 25 win to its resume by beating the Utah Utes on Saturday night. If that happens, Oregon might not be able to add another ranked victory in the Pac-12 Championship Game since Utah would drop out of the rankings.

Ohio State has an opportunity to beat four ranked teams in a row. That run started with a blowout victory over the Purdue Boilermakers in Week 11.

The Buckeyes’ offensive output against Purdue showed what that unit can do at its best, and that could be a frightening sight for Michigan and Michigan State.

The Wolverines and Spartans will be playing for their playoff lives in the next two weeks, but Ohio State’s offense has been hard to start. Even Oregon allowed 28 points to the Buckeyes.

If Ohio State’s offense can’t be slowed down, it will end up in the Big Ten Championship Game in a likely matchup with the Wisconsin Badgers, who would need everything to go right defensively to win that contest.

If Ohio State wins out, it will have five Top 25 victories compared to two from Oregon. That could be enough to boost the Buckeyes into the No. 2 seed.

The order of Ohio State and Oregon will not matter if Georgia wins out. The two sides will likely be matched up against each other in the No. 2-versus-No. 3 showdown since Cincinnati and its Group of Five resume would likely be No. 4 in that scenario.

Denial of responsibility! NewsUpdate is an automatic aggregator around the global media. All the content are available free on Internet. We have just arranged it in one platform for educational purpose only. In each content, the hyperlink to the primary source is specified. All trademarks belong to their rightful owners, all materials to their authors. If you are the owner of the content and do not want us to publish your materials on our website, please contact us by email – [email protected]. The content will be deleted within 24 hours.
best sports newsBowlCFPnews update sportsnewsupdatePredictionsprojectionsrankings