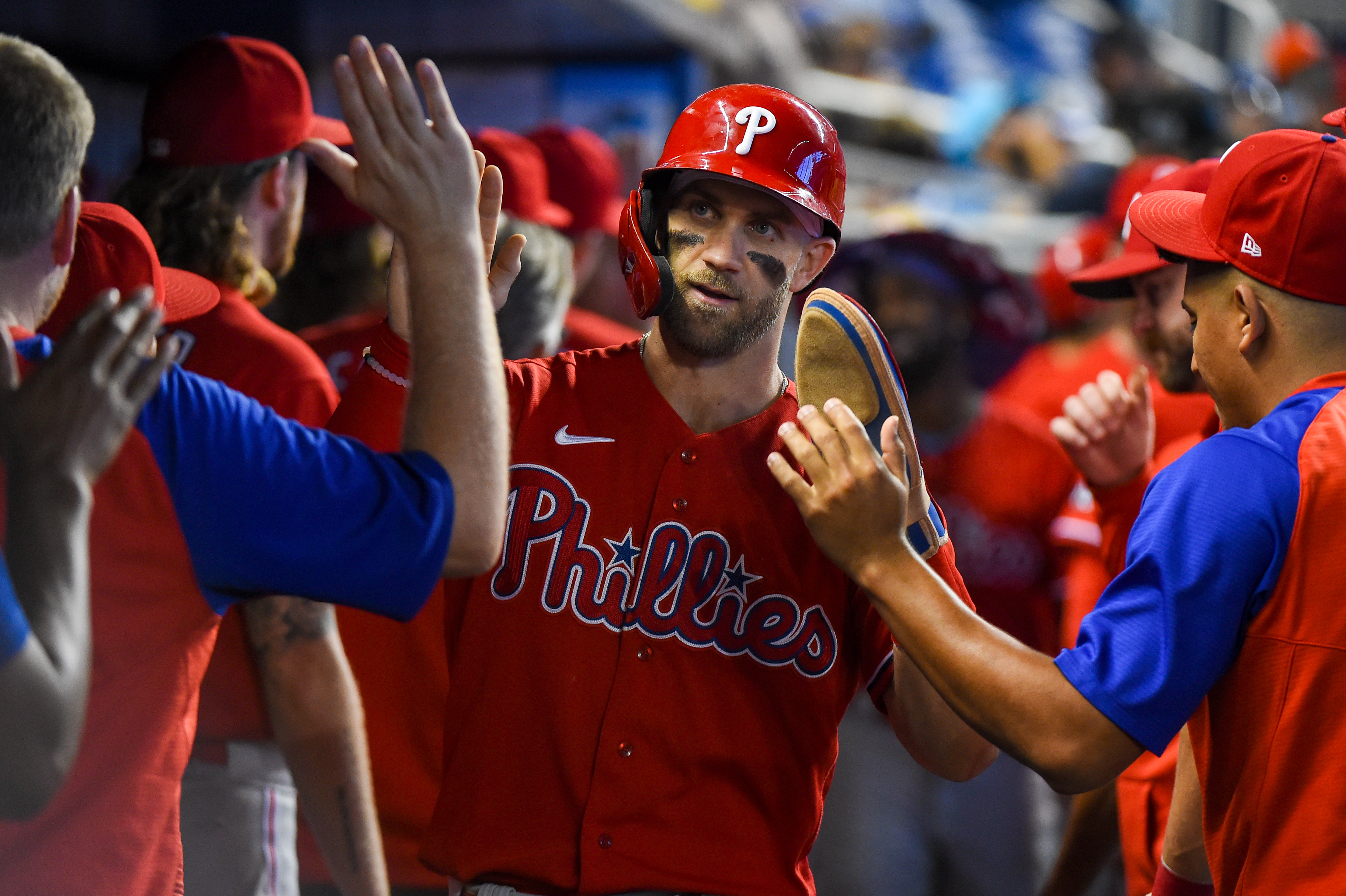 “Overrated” is a word that’s often been attached to Bryce Harper throughout his career, including after he had just put his signature on a $330 million contract with the Philadelphia Phillies in March of 2019.

“It’s marketing. It’s star power,” said one unnamed player to The Athletic. “But what has he done besides have one year?”

Well, at the time he had a Rookie of the Year, six All-Star selections and a National League MVP. And after his third and most successful season with the Phillies in 2021, he’s now officially a two-time MVP winner.

Dare we say, even Hall of Fame good?

For what it’s worth, the 29-year-old now has the 10 seasons that he’ll need to be eligible for Cooperstown when his time comes. And especially in context of how often he’s been called the dreaded O-word, his numbers are firmly in “Better Than You Think” territory.

And the really scary part? He’s only getting better.

Sorry, Juan Soto, But Harper Deserved This One

Unlike when he won his first NL MVP as a member of the Washington Nationals in 2015, Harper was not a unanimous selection by Baseball Writers Association of America voters this time around.

Even though the Nationals won just 65 games to the Phillies’ 82, there were good arguments to be made for Soto as this year’s rightful NL MVP. The simplest one is that he led all NL position players with 7.1 rWAR, though he likewise paced the field with a .465 OBP.

Harper? He barely cracked the top 10 with 5.9 rWAR. And while his .429 OBP was spectacular on its own, Soto’s 36-point advantage isn’t what you would call small.

Harper did, however, lead all of Major League Baseball in slugging, OPS and OPS+, while also chipping in 35 home runs and 42 doubles. So even if Soto was better at the oh-so-important task of not making outs, neither he nor any other hitter had as balanced an offensive campaign as Harper.

Plus, Harper was clutch.

Not just in the sense that his OPS was north of 1.000 both in high-leverage situations and with men in scoring position, but also in that he truly carried the Phillies when they needed carrying in the latter half of the season. In 73 games, he went off for an other-worldly .338/.476/.713 line and 20 of his home runs.

Granted, the Phillies still only went 38-36 in the second half and missed the playoffs for the 10th straight season. Yet it’s remarkable that they weren’t even eliminated from the race until Sept. 30. Because by then, Rhys Hoskins was done for the year with an injury and the likes of J.T. Realmuto and Jean Segura were slumping.

Though the weight that Harper bore down the stretch of 2021 only helped his WAR so much, it did move the needle quite a bit for two other value metrics: win probability added (WPA) and championship win probability added (cWPA). These stats are pretty much just what they sound like, and Harper paced the National League in both categories.

You want an MVP? That’s an MVP. Not just a great player, but a player whose greatness truly made a difference for his team.

So, About the Hall of Fame

In addition to being his second, Harper’s latest MVP is also the fifth of one sort and the 15th of another sort.

For the first, Sarah Langs of MLB.com pointed out that Harper joined Jimmie Foxx, Alex Rodriguez, Barry Bonds and Alex Rodriguez as the only players to win MVPs for two different franchises.

For the second, from John Clark of NBC Sports Philadelphia comes this note about Harper joining 14 other players in winning two MVPs before his age-29 season:

From either of these perspectives, Harper is a guy whose company is mostly Hall of Famers and future Hall of Famers. As omens go, that’s a decidedly good one for his own chances of one day being enshrined in Cooperstown.

As for the numbers, well, that’s where there’s room for debate. Harper’s 40.1 career rWAR, for example, is only seventh all-time for primary right fielders through the age of 28.

There are some Hall of Famers below him on that list, but the only one of recent vintage is Vladimir Guerrero Sr. And because he had staked his reputation on being a .300 hitter with power, speed and a thunderbolt arm, Guerrero was arguably a more complete player then than Harper is now.

Strictly as a hitter, though, Harper is a rare sort.

You can distill the essence of his career down unusual longevity for a 20-something, as well as his proficiency at both getting on base and hitting for power. Do this, and you find him on a short list of players with at least 5,000 plate appearances, a .390 OBP and 260 home runs through their age-28 seasons:

Three of the guys on this list are already in the Hall of Fame. The three directly below Harper inevitably will join them in the not-too-distant future. Again, another good omen for Harper.

It’s also important to remember that in addition to the numbers, he’s writing a story worthy of Cooperstown.

It was with a staggering amount of hype that Harper was introduced to the general public, first as a Sports Illustrated cover boy as a 16-year-old in 2009 and later as perhaps the best prospect ever after the Nationals drafted him No. 1 overall in 2010. So when he finally made his major league debut in April of 2012, there was an inescapable sense that he couldn’t possibly live up to what was expected of him.

If it were to be written today, though, his Hall of Fame plaque would note that he has.

The Road Ahead for Harper

So, all Harper really needs to do now is keep doing what he’s been doing.

Namely, stay healthy and keep sharpening what some call “old people skills.” He’s only missed 31 games over the last three seasons, and both his patience and his power have been in especially fine form over the last two.

Lest anyone get the impression that Harper has been hitting at an elite level for just two seasons, it’s more like two-and-a-half. Because while he got off to a slow start for the Phillies in 2019, he turned a corner in August and has hit .296/.417/.601 in 248 games since then.

Along with more of that, what would really help Harper’s march toward Cooperstown is if he could actually play in some playoff games with the Phillies. Even better, maybe even win what would be his first ring.

This, however, is where he’s but one of many cogs in a bigger machine. The success of this machine is in the control of president of baseball operations Dave Dombrowski, who simply must discover the means to break the Phillies out of the .500-ish purgatory in which they’ve been stuck for the last four seasons.

But if nothing else, he can rest a little easier knowing that the team’s most expensive player is also its best player. And for now, literally the Most Valuable Player in the National League.

Denial of responsibility! NewsUpdate is an automatic aggregator around the global media. All the content are available free on Internet. We have just arranged it in one platform for educational purpose only. In each content, the hyperlink to the primary source is specified. All trademarks belong to their rightful owners, all materials to their authors. If you are the owner of the content and do not want us to publish your materials on our website, please contact us by email – [email protected]. The content will be deleted within 24 hours.
best sports newsBrycecaseFameHallHarpersMVPnews update sports