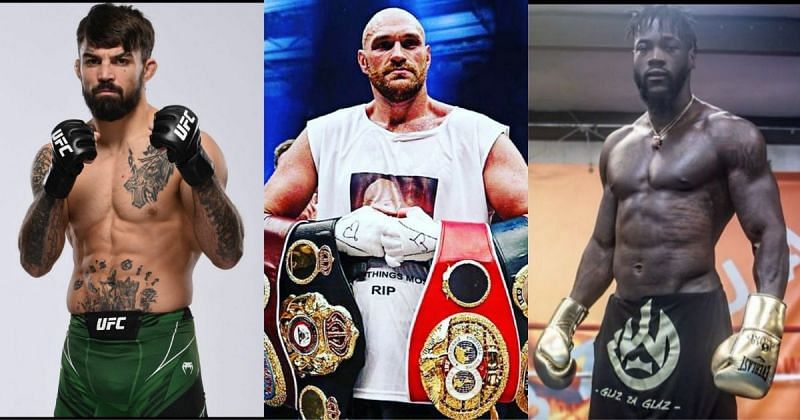 “Can I get an opponent I outweigh by almost 50lbs?” – ‘Platinum’ Mike Perry appears to troll Tyson Fury after he knocked out Deontay Wilder

UFC welterweight Mike Perry took to Twitter to troll Tyson Fury after he knocked out Deontay Wilder in spectacular fashion at the T-Mobile Arena in Las Vegas, Nevada.

Can I get an opponent I outweigh by almost 50lbs ?

Can I get an opponent I outweigh by almost 50lbs ?

Tyson Fury and Deontay Wilder tilted the scale at the highest weights of their careers for their trilogy bout. Fury weighed in at 277 pounds, one pound higher than his previous career high. The Brit weighed in at 256 lbs before their first fight and 273 lbs ahead of their rematch in February 2020.

Wilder’s official weight was 238 pounds ahead of this trilogy fight. His previous career-high weight was 231 lbs in his last bout against Fury. During their first fight, the American weighed in at 212 lbs.

Tyson Fury and Deontay Wilder competed in one of the greatest title fights in heavyweight history at the T-Mobile Arena in Las Vegas on Saturday night. The two heavyweights put on an incredible show for their fans all around the world. Fury and Wilder engaged in a gruesome back-and-forth fight that kept fans on the edge of their seats.

‘The Gypsy King’ scored a knockdown over Wilder in the third round, but the American came back stronger in the next frame and scored two knockdowns over Fury. They appeared to exchange evenly over the next couple of rounds. ‘The Bronze Bomber’ looked fatigued in the second half of their bout while Fury was evidently the fresher fighter.

Tyson Fury was more dominant in the final rounds. He dropped the American for the second time in the tenth frame. ‘The Gypsy King’ knocked out Wilder at 01:11 of the eleventh round to put an end to the iconic trilogy.

The controversy around the slow count for Tyson Fury

Many combat sports fans and fighters believe that the referee counted at a plodding pace, giving ‘The Gypsy King’ ample time to get up from the second knockdown in the fourth round.

Deontay Wilder previously claimed that Fury was given a longer count in the final round of their first meeting. ‘The Bronze Bomber’ dropped Fury with a thundering right hand and sent him crashing to the canvas. However, Fury beat the count and looked revitalized, winning the rest of the round.

The bout went the distance and ended in a stalemate. Fury won his second bout with Wilder via TKO.

Denial of responsibility! NewsUpdate is an automatic aggregator around the global media. All the content are available free on Internet. We have just arranged it in one platform for educational purpose only. In each content, the hyperlink to the primary source is specified. All trademarks belong to their rightful owners, all materials to their authors. If you are the owner of the content and do not want us to publish your materials on our website, please contact us by email – [email protected]. The content will be deleted within 24 hours.
50lbsAppearsbest sports newsBoxing World ChampionshipDeontayDeontay WilderFuryHeavyweight boxing

Rumour Has It: Newcastle consider move for Dortmund’s…