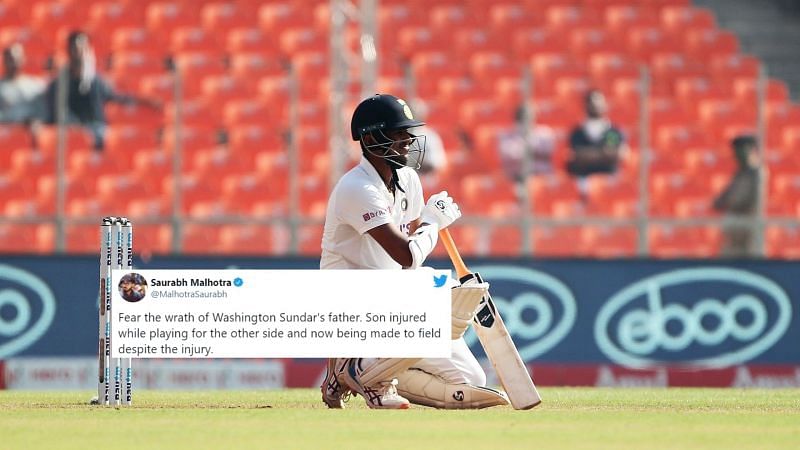 “Can someone clarify?”- Twitterati confused as Washington Sundar takes the field despite injury

Washington Sundar, who was reportedly ruled out of the England series with a finger injury, was seen fielding in the ongoing practice game between India and County Select XI at Durham.

According to sources at ANI, Sundar had hurt his finger during the warm-up game and was ruled out for six weeks, making him unavailable for the England series.

“Sundar has hurt his finger and will take around six weeks to be a 100 per cent. He won’t be taking part in the Test matches,” the source had told ANI.

However, Washington Sundar was seen diving around while fielding for the County Select XI. This has sparked confusion among Indian fans about whether or not the young all-rounder is fully fit. While some believe the news of him being ruled out is false, others felt fielding him is a huge risk if he is indeed injured. Here’s how Twitter reacted:

How come is Washington Sundar fielding after being ruled out for six weeks due to finger injury? #INDvCountyXI #ENGvIND

Fear the wrath of Washington Sundar’s father. Son injured while playing for the other side and now being made to field despite the injury.

Can we get a clarification on Washington Sundar @BCCI ????? If he’s injured as most of the sources say (As we get news only from them), why is he out there fielding for the County XI ??? #CountyXIvIndia #COUNTYXIvIND #FCCXIvIND

Reports everywhere that Washington Sundar has a finger injury and is ruled out of the series. He’s fielding for the County XI in this second innings today. Can someone clarify what the situation is?

Did it happen when he got out off siraj’s blow on gloves, yesterday?
But, i can see Washington Sundar fielding. ????

Does BCCI have toolkit???? that mentioned wrong date to injury news. (that too false, as they often do nowadays)????@BCCI @Sundarwashi5 #INDvDurham https://t.co/bQKL8Ssx68

Can Washington Sundar be seen as a middle-order batsman?

Washington Sundar, in his short career so far, has played a number of match-defining knocks under immense pressure. He has played in the top order for his state side Tamil Nadu and has shown that he has the technique as well as temperament to be successful as a batsman.

With the form of Cheteshwar Pujara and Ajinkya Rahane becoming a worry for India post the World Test Championship final loss, fans have begun wondering who could replace them in the side. Could Washington Sundar be considered a long-term middle-order option in the Test set-up?

India currently have a few options within their squad in the form of Hanuma Vihari and KL Rahul. The latter even scored a fine hundred in the first innings of the warm-up game. It will be interesting to see if the BCCI sends more batsmen to England as cover for potential injuries.

It also remains to be seen whether Washington Sundar is seriously injured or if him fielding could mean he is fit for the start of the Test series against England.

Denial of responsibility! NewsUpdate is an automatic aggregator around the global media. All the content are available free on Internet. We have just arranged it in one platform for educational purpose only. In each content, the hyperlink to the primary source is specified. All trademarks belong to their rightful owners, all materials to their authors. If you are the owner of the content and do not want us to publish your materials on our website, please contact us by email – [email protected]. The content will be deleted within 24 hours.
best sports newsclarifyconfusedCounty Select XICricketEngland Cricket TeamfieldIndia vs England 2021

Scammers offer streaming services, giveaways and a fake cyber currency to cash in on the Olympic Games