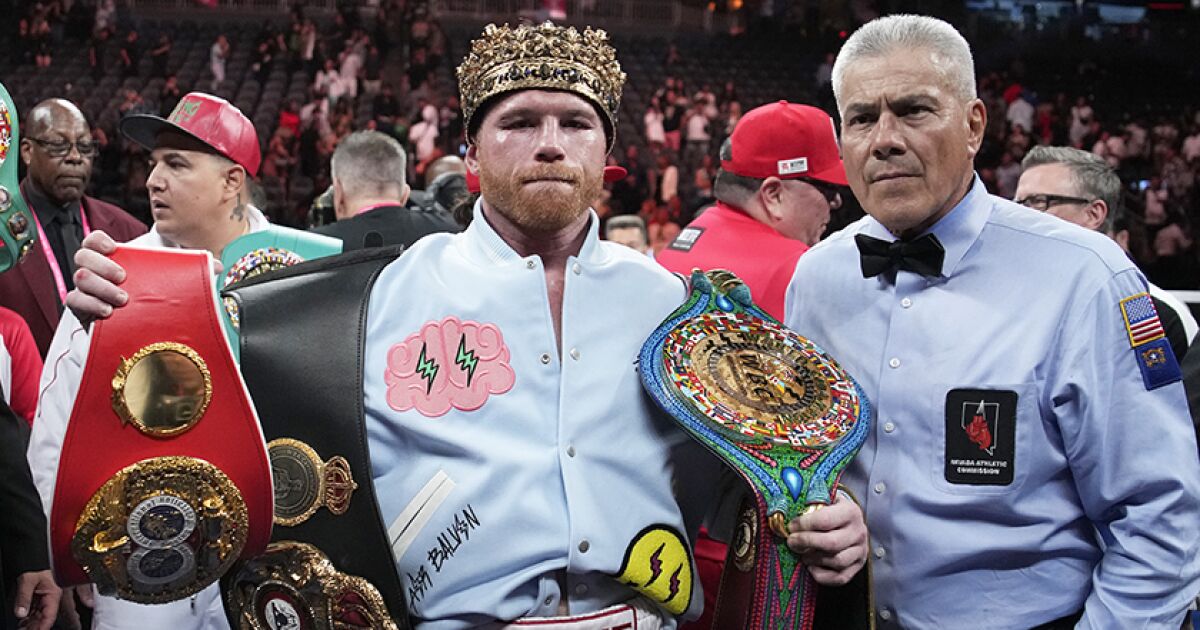 Canelo Álvarez and Gennadiy Golovkin, rivals for a half-decade atop the boxing world, dropped their gloves once the final bell sounded Saturday. They embraced in the center of the ring at T-Mobile Arena. They exchanged words. Golovkin kissed Álvarez on the cheek.

The animosity between the fighters, after squaring up for 36 rounds since 2017, abruptly had vanished.

“I told him, ‘Thank you for everything,’” Álvarez said in Spanish, “because we gave the fans three great fights.”

Álvarez, 32, wore a gold crown and a smile. He had Golovkin wait four years, until after the Kazakh’s 40th birthday, to complete their trilogy and he ended it with a convincing, unanimous-decision victory to remain the undisputed super-middleweight champion despite fighting with a broken left hand that he said will require surgery.

With the win, he rebounded from his one-sided May loss to light-heavyweight Dmitry Bivol in front of another supportive crowd the night after Mexican Independence Day.

Álvarez (58-2-2, 39 knockouts) was the aggressor for the first eight rounds, easily handling his older foe economically. Golovkin appeared unwilling — or unable — to let loose. He finally awoke in the ninth, engaging in exchanges with Álvarez over the final four rounds to spice up a bland bout.

Álvarez, meanwhile, appeared to tire down the stretch as he did against Bivol. But Golovkin (42-2-1, 37 KOs) needed a knockout and didn’t produce one in a fight without a knockdown. Two judges inexplicably scored the fight 115-113 for Álvarez. The third had it 116-112.

Still, controversy didn’t cloud the result, unlike the other fights.

The first, in 2017, ended in a draw that many observers considered a convincing Golovkin win. Bad blood spilled into the rivalry ahead of the rematch in 2018 when Álvarez tested positive for a performance-enhancing drug twice two months before the bout, which was moved from May to September, and Álvarez was banned for six months.

Álvarez said he had eaten contaminated meat. Golovkin called him a cheater. Tension painted the rematch, which Álvarez narrowly won with a more aggressive approach.

Meanwhile, the smallest fighter to step in the ring Saturday might have been the most talented one.

Álvarez was the cash cow, a superstar in a sport thirsty for them clinging to his prime. Jesse Rodriguez represents the future.

The San Antonio native is a dynamic prospect who burst on to the scene this year with two impressive wins in less than five months, putting him on a path to become fighter of the year. Enthusiasts are wondering if Rodriguez, the youngest active champion in the world, is already one of the top pound-for-pound boxers.

Rodriguez (17-0, 11 KOs) didn’t dazzle as expected Saturday against Israel Gonzalez (28-5-1, 11 KOs), instead encountering a tougher-than-expected bout. But he controlled the fight enough to win a unanimous decision and retain his World Boxing Council super-flyweight title in the co-feature event. His rapid rise continued.

His outlook as a headline attraction, however, remains unclear.

Boxers in the 22-year-old Rodriguez’s weight range — 108 to 115 pounds — historically don’t lure stardom. Rodriguez and his camp know that; the subject repeatedly was noted during his time with the press last week.

Rodriguez finished strong to seal the victory, but it wasn’t the kind of win that excited viewers. No highlights for social media. No moments that will be remembered. It was a dull fight, and dull fights don’t attract casual fans. That, not any opponent, might be the biggest challenge he will encounter in the coming years.

Álvarez doesn’t face that problem. He’s the most famous boxer in the world, a one-name brand with the backing of a country. He spent the last four years solidifying his spot atop the boxing world by taking on almost anybody in his way not named Golovkin until he finally stumbled opposite Bivol at light-heavyweight.

He returned to super-middleweight, his preferred weight class, and regained his footing while Golovkin fought above middleweight for the first time in his professional career.

Álvarez marked up Golovkin’s face with some stiff jabs. He landed snappy combinations. He found a second wind in the final two rounds to leave no doubt. He was the clear victor in his 23rd career world title fight, a chapter-closing meeting the sport waited too long to see.

In the end, the hostility between them was in the past. Álvarez said the beef was squashed, instead lauding his rival. Golovkin, who maintained he doesn’t plan to retire yet, reciprocated.

“Congrats to Canelo and his whole team,” Golovkin said. “He’s a real warrior.”

The two men then shook hands and embraced again, their time in the ring together over for good.

Also: Diego Pacheco scored a fifth-round technical-knockout victory over Enrique Collazo to improve to 16-0 with 13 knockouts.

Denial of responsibility! NewsUpdate is an automatic aggregator around the global media. All the content are available free on Internet. We have just arranged it in one platform for educational purpose only. In each content, the hyperlink to the primary source is specified. All trademarks belong to their rightful owners, all materials to their authors. If you are the owner of the content and do not want us to publish your materials on our website, please contact us by email – [email protected]. The content will be deleted within 24 hours.
Alvarezbest sports newsCaneloDefeatsfightsGennadiyGolovkinGreat

USC’s defense bites back in win over Fresno State that moves No. 7 Trojans to 3-0