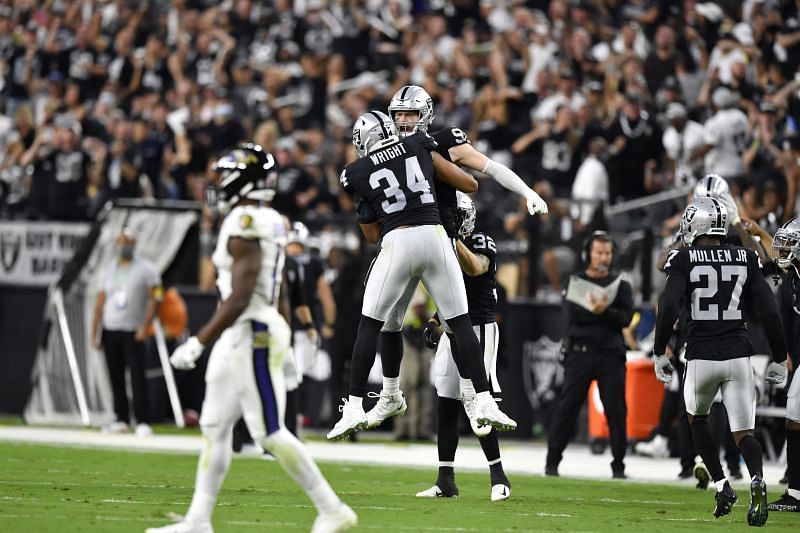 When Carl Nassib stepped on to the field to play for the Las Vegas Raiders, he did so knowing he would be creating history. He came out as gay earlier in the offseason and in the process became the first openly gay player to play in the regular NFL season.

Carl Nassib became 1st active openly gay player in NFL tonite. And fact it has happened w/so little controversy & just slipped into broadcast in 3rd quarter like a random segment feels like more progress than I expected. Shout out to Michael Sam who paved way for this. pic.twitter.com/P6YKlq2yIX

It was definitely a towering achievement given even today how many people face persecution for their sexual orientation. With all eyes on him, Carl Nassib delivered the moment of the match.

Carl Nassib thrives under the spotlight

The Las Vegas Raiders and the Baltimore Ravens game is already being discussed potentially as the game of the season. And we are in Week 1!

As the match went into overtime, the Las Vegas Raiders failed to score a touchdown by a fraction after having won the toss and elected to have the ball first.

Instead, the ball was intercepted by the Baltimore Ravens. They were progressing down the field knowing that the next score wins, and were getting into field goal territory. Just when that possibility seemed closed to fruition, up stepped Carl Nassib.

He made a huge play in OT, causing the fumble from Lamar Jackson which helped the @Raiders set up the game-winning TD 💪

Carl Nassib flipped the game on its head by forcing Lamar Jackson to fumble. It allowed the Las Vegas Raiders to recover the ball in a “Next Score Wins” situation. Without that play, the Baltimore Ravens would have been the likely winner.

Zay Jones’ touchdown sealed a 33-27 overtime win for the Las Vegas Raiders, marking their first game at Allegiant Stadium in front of their home fans.

Carl Nassib leads the way on and off the field

It was an ideal night for Carl Nassib in every single way. He had the opportunity to show the world that being a gay player has no bearing on how good a footballer turns out to be. Many people still have the misconception that gay men are physically diminished compared to straight men. Anyone who saw Carl Nassib’s performance yesterday would have been speedily disabused of that notion.

One can only hope that the performance Carl Nassib exhibited paves the way for more gay players to embrace who they are. Football should be a game for everyone and nobody should be left out. Ultimately, football is nothing without participation and the more people participate in it from all walks of life, the richer the sport will be.

Loading...
Denial of responsibility! NewsUpdate is an automatic aggregator around the global media. All the content are available free on Internet. We have just arranged it in one platform for educational purpose only. In each content, the hyperlink to the primary source is specified. All trademarks belong to their rightful owners, all materials to their authors. If you are the owner of the content and do not want us to publish your materials on our website, please contact us by email – [email protected]. The content will be deleted within 24 hours.
Loading...
AgameAmerican Football ConferenceBaltimore Ravensbest sports newsbringsCarlfieldLamar Jackson

apple: You can no longer buy these 3 iPhones from Apple online store in India – Times of India