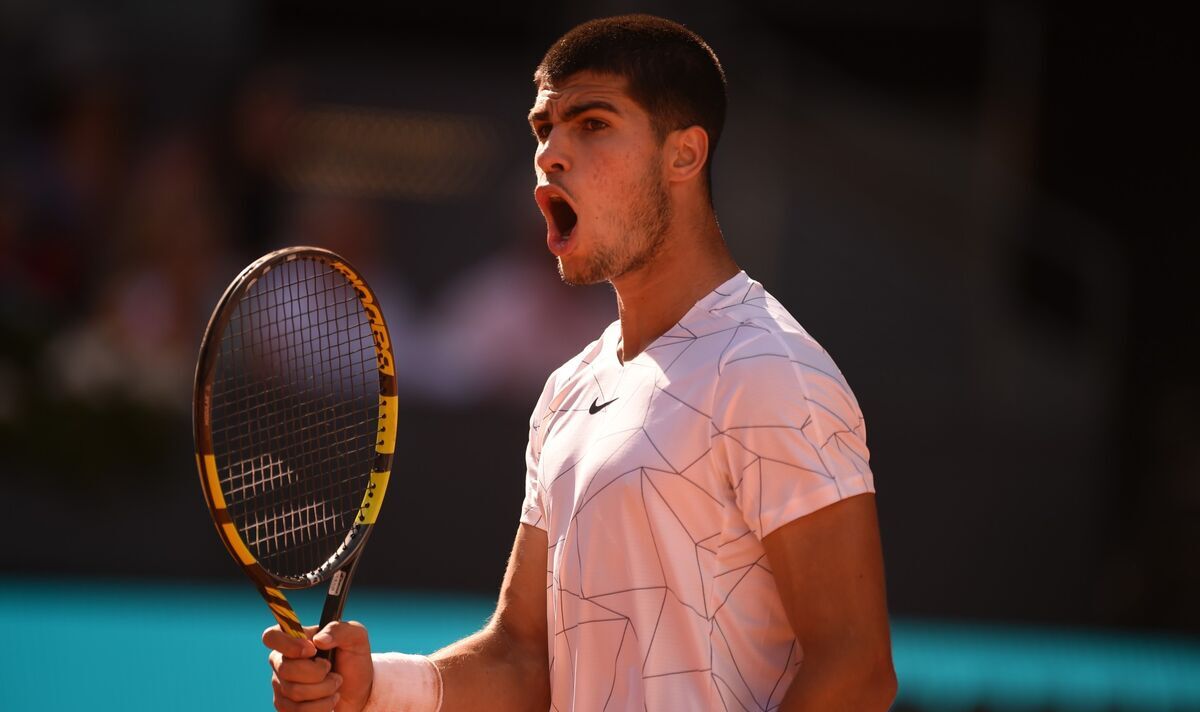 It was third time lucky for Carlos Alcaraz, as he finally got a maiden victory over Rafael Nadal in the Madrid Open quarter-final. The 19-year-old outlasted the five-time former champion 6-2 1-6 6-X in a rollercoaster two hour and 28 minute match that saw Alcaraz hindered when he rolled his ankle and play stopped as medics rushed to a fan in the stands. He will now face world No 1 Novak Djokovic for the first time in Saturday’s semi-final.

Nadal and Alcaraz were facing off for the third time, exactly one year and one day after their first meeting in the Madrid second-round on what was Alcaraz’s 18th birthday. Within a year, Alcaraz had gone from 120th-raked wildcard to world No 9 and four time title-winner, showing exactly how much he had improved since their first match as he broke his idol’s serve in the very first game.

The third seed responded by immediately going 0-40 up but the teenager saved all three, eventually gifting Nadal the break-back with a double fault. The five-time former champion in Madrid looked set to hold on at 40-30 but was broken once again by Alcaraz, with the pair needing 24 minutes to get past the first three games.

Both Spaniards then completed their first service holds of the match before the seventh seed stepped it up, winning the next three games in a row to take the opener 6-2, firing 19 winners to just two from Nadal in the 48 minute set. The elder Spaniard ended his opponent’s run of games as opened the second set with a hold and momentum looked to shift when he went 0-40 up on Alcaraz’s serve but the recent Barcelona champion held on to level things at 1-1.

JUST IN: Djokovic eases past Hurkacz to set up potential Nadal clash in Madrid

The 19-year-old then lost his footing in the next game as Nadal held to 15, appearing to roll his ankle with the world No 4 running over to check on him. Alcaraz took a medical time-out to have his ankle strapped up while Nadal left the court for a brief bathroom break, and the teenager looked hampered as he resumed play, immediately getting broken to love.

Play was momentarily paused as medics rushed to a spectator who was taken unwell in the stands but the break couldn’t help Alcaraz, who lost three games in a row at the resumption of play with Nadal closing out a 6-1 second set to force a decider. But it was the world No 9 who was first to strike in the decider, breaking to go 3-1 up and holding on to solidify the break, extending his lead to 4-1. It proved to be a crucial break as he continued to hold his nerve and managed to serve out a 6-2 1-6 6-3 victory to finally clinch his first win over Nadal and advance to the semi-finals.

Denial of responsibility! NewsUpdate is an automatic aggregator around the global media. All the content are available free on Internet. We have just arranged it in one platform for educational purpose only. In each content, the hyperlink to the primary source is specified. All trademarks belong to their rightful owners, all materials to their authors. If you are the owner of the content and do not want us to publish your materials on our website, please contact us by email – [email protected]. The content will be deleted within 24 hours.
AlcarazBeatbest sports newsCarlosDjokovicinjuryNadalnews update sports