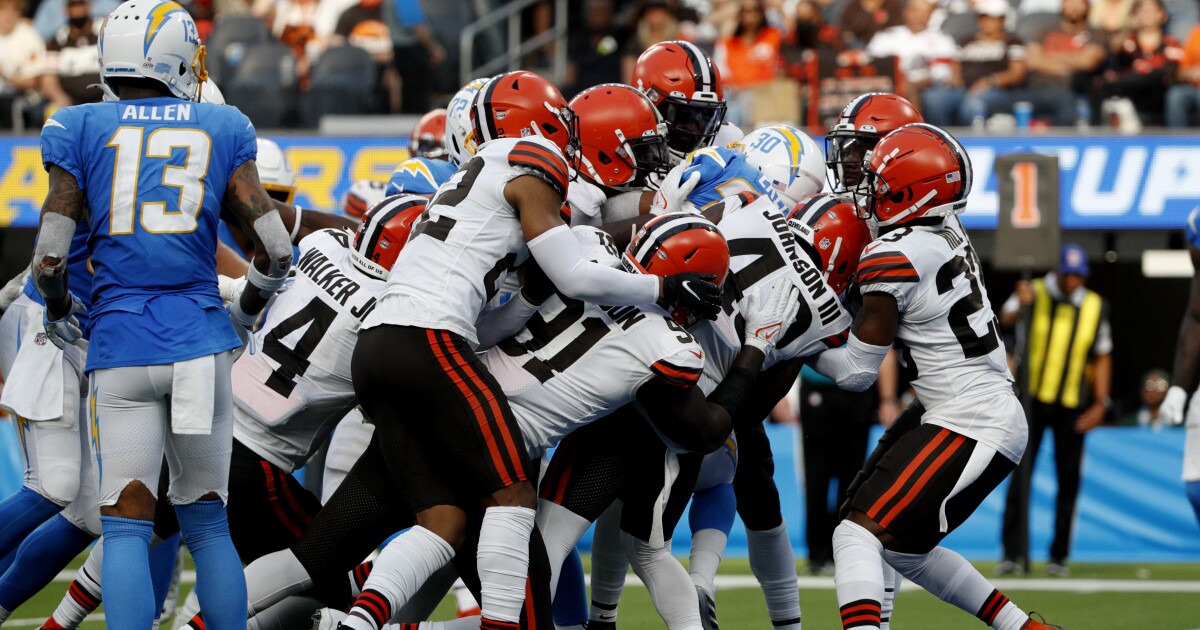 The play has the idea of surrender right in its name:

And yet running back Austin Ekeler still reached the end zone Sunday at the game’s most crucial point, scoring one of the most reluctant, least conventional touchdowns in NFL history.

“I still have this feeling in my stomach like, ‘Oh, like literally [I] could have blown the game if the defense didn’t get a stop right there,’” Ekeler said after the Chargers’ 47-42 win over Cleveland at SoFi Stadium. “So thank you, defense.”

No Más meant Ekeler wasn’t supposed to score, the Chargers, trailing 42-41, intent on draining the clock in order to end the afternoon with a short, game-deciding field-goal attempt.

On first and goal at the Browns’ three-yard line with 1:38 remaining, Justin Herbert handed the ball to Ekeler. He stutter-stepped toward the line of scrimmage, stalling.

Then, with a crush of humanity gathering, several Cleveland defenders grabbed Ekeler and dragged him into the end zone, the Browns essentially scoring the Chargers’ winning touchdown.

“That’s just me being greedy,” Ekeler said. He added that he had no idea Cleveland’s defense would react the way it did, otherwise “I would have went down immediately.”

Chargers coach Brandon Staley suggested he wasn’t sure if what the Browns did is allowed by NFL rules.

“It was my interpretation that you can’t be pulled in,” he said. A league official, however, indicated there is no rule against aiding an opponent.

After failing to convert a two-point try, the Chargers had to turn to their defense to finish off the Browns for one of the most unlikely NFL victories of all time.

With that incompletion, Cleveland made league history, becoming the first team to score at least 40 points and have no turnovers in a defeat. Under such circumstances, teams had been 463-0.

“What you have to do is play the game as it expresses itself,” Staley said. “What we needed was our offense to score today and then what we needed from our defense was to get stops when we needed to, and that’s what we did.”

The Chargers scored touchdowns on each of their final four full possessions, overcoming what had been a 27-13 deficit near the middle of the third quarter. They went three for three on fourth down and four for four in the red zone.

Herbert finished with a career-high 398 yards passing and four touchdowns. He also scored on a nine-yard run to outlast Mayfield and a Browns rushing attack that amassed 230 yards and averaged 6.6 yards per carry.

“To win a game like this that turns into a track meet, you have to have a superstar quarterback,” Staley said. “And that’s what he is. He was fantastic.”

Over his past three games, Herbert is 77 for 119 for 11 touchdowns and 901 yards, with no interceptions or turnovers. After the Chargers lost seven of his first eight career starts, Herbert’s teams are now 10-10.

“Leadership,” wide receiver Mike Williams said when asked what he saw from Herbert in the second half Sunday. “A great quarterback. Poise. He believes in us. We believe in him.”

Williams finished with another career game, as well. For the second time in three weeks, he set a personal best for receiving yards, this time upping his top total to 165.

The fifth-year wideout twice ran free behind Cleveland’s secondary for touchdown catches of 72 and 42 yards. He finished with eight receptions on 16 targets, another career high.

“Mike, sheesh,” Ekeler said. “It’s looking good. And we’re using him more in the short game, which I love because he’s got these big tree-trunk arms and stiff-arms people and gets around the edge.”

Ekeler finished with 119 yards from scrimmage and three touchdowns on 22 touches. He scored twice in the final 3:15 of a game in which the lead changed seven times.

The Chargers and Browns combined for 41 points in the fourth quarter, a single-quarter franchise record for the Chargers, who improved to 4-1 overall and 3-1 in one-score games.

Said Herbert, “I think we’re learning how to win.”

Indeed the Chargers are, even when the opposition scores the deciding touchdown in their favor.

Ekeler typically celebrates his trips to the end zone by dramatically strumming an air guitar in an exaggerated manner.

“At that point I was like, ‘Yeah, let me hit the guitar,’” Ekeler said. “The fans were all going crazy, right? They don’t understand. You know, ‘Oh, yeah, we scored!’”

On a day when the Chargers rocked SoFi Stadium, Ekeler’s encore was understandably acoustic.

Denial of responsibility! NewsUpdate is an automatic aggregator around the global media. All the content are available free on Internet. We have just arranged it in one platform for educational purpose only. In each content, the hyperlink to the primary source is specified. All trademarks belong to their rightful owners, all materials to their authors. If you are the owner of the content and do not want us to publish your materials on our website, please contact us by email – [email protected]. The content will be deleted within 24 hours.
best sports newsBrownsCallchargerscomebackdraggedMasnews update sports