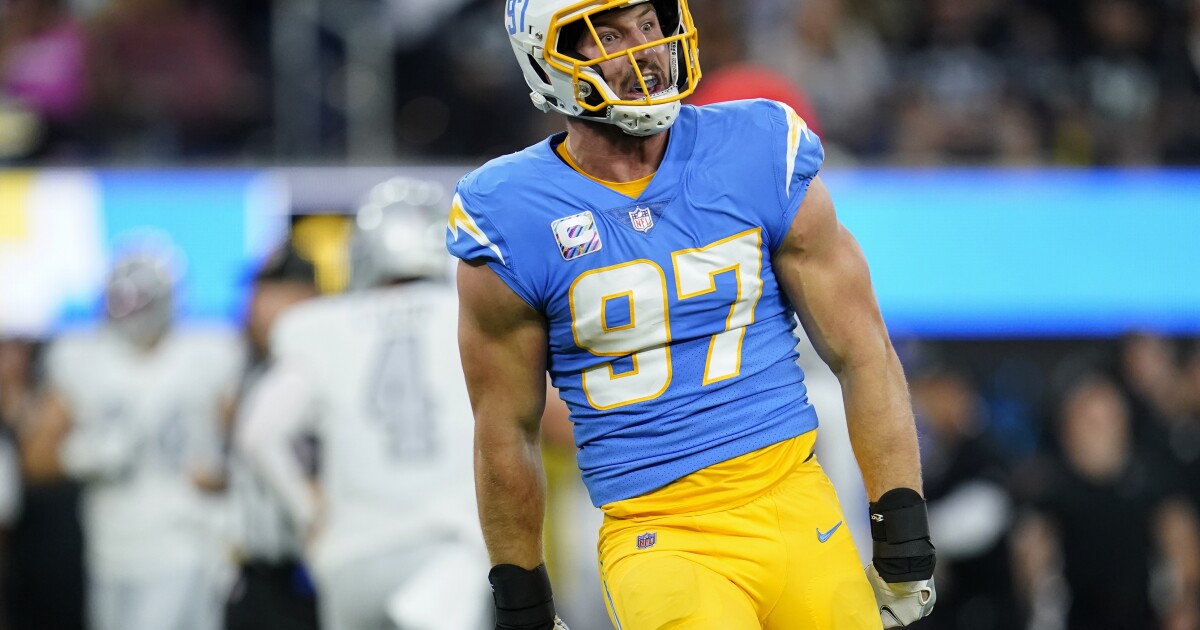 Chargers coach Brandon Staley on Tuesday supported Joey Bosa’s right to publicly vent about officials after the Chargers’ 28-14 victory over the Las Vegas Raiders on Monday night, noting his status within the league. Bosa is a three-time Pro Bowl player.

“This guy has earned the right to express himself,” Staley said. “This guy’s a premium player in the league. This isn’t uncommon for players like that to talk about officiating. It’s a big part of the game.”

Bosa picked up an unsportsmanlike penalty in the final four minutes after he was upset about not drawing a holding penalty on a Derek Carr incompletion.

“Refs are blind, simple,” he said after the game. “I’m sorry, ‘But you’re blind, like, open your eyes and do your job.’ It’s so bad. It’s unbelievable.”

The situation ended up having no influence on the score when, two plays later, Derwin James had a game-sealing interception.

“Obviously that’s on me,” Bosa said. “I should never lose my control like that. But these guys have got to do a better job because it’s been years of terrible, terrible miscalls, left and right. It’s really pathetic, honestly, but pathetic on me, too, for doing what I did.

“Call or not, I have to take a step back and just go to the next play. But, man, they just seem to not even have their eyes open half the time.”

Staley also emphasized the importance of Bosa admitting he erred by going too far and being flagged for a penalty himself.

“The takeaway is not him being frustrated with the officiating because he has every right to be frustrated about what was going on,” Staley said. “He took full ownership, which is what I want to see as a coach.”

Denial of responsibility! NewsUpdate is an automatic aggregator around the global media. All the content are available free on Internet. We have just arranged it in one platform for educational purpose only. In each content, the hyperlink to the primary source is specified. All trademarks belong to their rightful owners, all materials to their authors. If you are the owner of the content and do not want us to publish your materials on our website, please contact us by email – [email protected]. The content will be deleted within 24 hours.
backsbest sports newsBosaBrandonchargersCoachJoeynews update sports

What Kylian Mbappe’s interviews tell us about his future for PSG, Real Madrid

Clayton Kershaw to avoid surgery, but he’s out for playoffs; Max Muncy unlikely to play